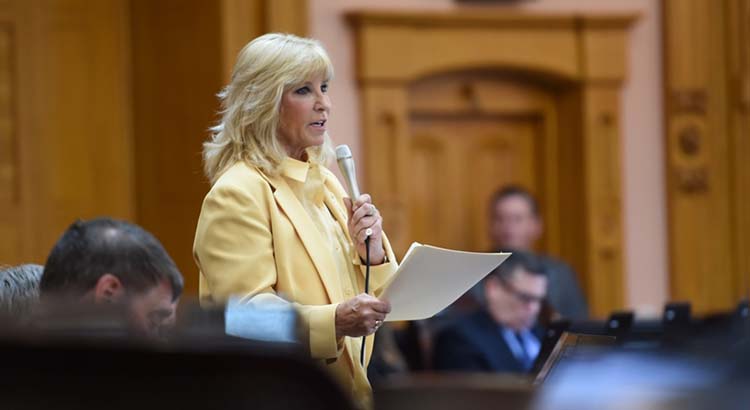 Two weeks later, a lobbyist for an association of nursing homes that backed the bill gave her another $13,200. The four contributions together comprise nearly half of all Carruthers’ campaign fundraising in 2021.

The legislation, House Bill 461, didn’t technically pass. However, the idea was folded into a separate appropriations bill that handed out $4.18 billion in federal pandemic relief funds to schools, child care and others. That bill gave an additional $300 million to nursing homes — atop the roughly $6.45 billion they receive in state and federal Medicaid funds — so long as the chronically short-staffed industry spends it on its workforce and not on executives, administrators, or staffing agencies.

However, on Wednesday, an amended form of HB 461 reappeared before the House Economic and Workforce Development Committee as an entirely rewritten document.

Instead of giving the facilities a lump sum payment of $300 million, the new version of the bill calls on the state Department of Medicaid to pay facilities an extra reimbursement for each resident they house in a private (instead of shared) room.

State analysts haven’t yet offered a formal cost estimate for the idea. However, Robert Applebaum, Director of the Ohio Long-Term Care Research Project at Miami University, offered a rough estimate of around $343 million in costs in the first year alone.

Carruthers did not respond to a phone calls and an email to her legislative office.

Does the bill make sense?

Applebaum said there are many good facilities that put a sincere effort toward providing adequate care that simply don’t make enough money from the state’s formula to reimburse facilities for care given to Medicaid patients. That formula is established by state law.

However, some homes in Ohio provide dangerously poor care. An Ohio Capital Journal investigation identified dozens of facilities that, according to federal regulators, placed the health and safety of residents in “immediate jeopardy” during the pandemic. At least 84 residents died in connection with the alleged infection control violations at 13 Ohio facilities during the pandemic. Additionally, despite a federal requirement, only 77% of nursing home workers are vaccinated against COVID-19 — the third lowest rate by state, according to federal data analyzed by the investigative journalism outlet ProPublica.

“It’s not that nursing homes shouldn’t get any [federal COVID relief funds], but why are we not using this as an opportunity to improve the quality of the facilities?” Applebaum said.

He said states can adopt strategies to improve care like providing more funds that must go to often-underpaid workers; or creating a pot of money specifically for facilities that meet certain quality targets.

While steering facilities to placing residents in private rooms is sensible, Applebaum questioned what added costs this puts on the sparsely filled facilities or why lawmakers are setting such a low bar.

To reach his $343 million estimate: There are about 940 nursing homes in the state, each with an average census of about 69 residents. Care for about 60% of those residents is funded by Medicaid. The bill, as written, provides an extra $25 per patient per day in a private room. So assuming all Medicaid patients wind up in private rooms, the bill will cost $343 million per year.

In the out years, the bill leaves it to the Department of Medicaid to determine the extra reimbursements for housing patients in a private room.

Carruthers introduced HB 461 on Oct. 25, 2021. On Nov. 4 of that same year, Brian and Gretchen Colleran each contributed $13,200 to her campaign. Brian Colleran is the CEO of Foundation Health Solutions, which operates 59 nursing homes in Ohio. His business partner, Daniel Parker, contributed the same amount on the same day.

In 2017, Colleran and Parker paid $20 million to settle Medicaid fraud allegations lodged via the U.S. Department of Justice. They were accused of billing claims to Medicaid for unnecessary treatment at 18 of their nursing facilities and billing Medicare for hospice services for ineligible patients. The settlement is not a finding of guilt, and they weren’t convicted of any crime.

The two did not respond to a voicemail and written inquiry left with the company.

On Nov. 19, 2021, Roger King — a lobbyist whose sole client is the Academy of Senior Health Sciences — gave her another $13,200. King’s phone number listed on lobbying forms directed a call to the Academy’s executive director, who didn’t respond to a voicemail.

Carruthers’ bill received its first hearing in its new form Wednesday in a committee focused largely on labor and economic issues — as opposed to committees that typically handle Medicaid and long-term care issues like the Health Committee, the Finance Subcommittee on Health and Human Services, or the Families, Aging and Human Services Committee.

The committee is chaired by Rep. Jay Edwards, R-Nelsonville, who himself has received more than $80,000 in campaign contributions since 2020 from Parker, Brian Colleran and Gretchen Colleran, according to campaign finance reports.

In an interview, Edwards said he knows of Colleran and Parker and has “spoken to them about their operations” but doesn’t have a relationship with them. He acknowledged that Carruthers’ bill “probably” doesn’t have much to do with workforce or economic development issues. However, he said a point can be made that private rooms might increase staffing needs, which makes the bill something of a workforce issue.

During Wednesday’s hearing, Rep. Catherine Ingram, D-Cincinnati, questioned why the bill was apparently rewritten instead of getting introduced as a new, unique bill. In an interview, she said it’s part of a strategy to keep legislation in a friendly committee where a chairman would fast track it, which she believes is the current strategy.

She said she supports funding elder care, but that money should follow the increasing consumer demand of providing more in-home care and keep older Ohioans out of nursing homes.

Ohio House Speaker Bob Cupp, R-Lima, didn’t respond to inquiries about the contributions to Carruthers, or why a nursing home bill is under review in an economic and workforce committee.