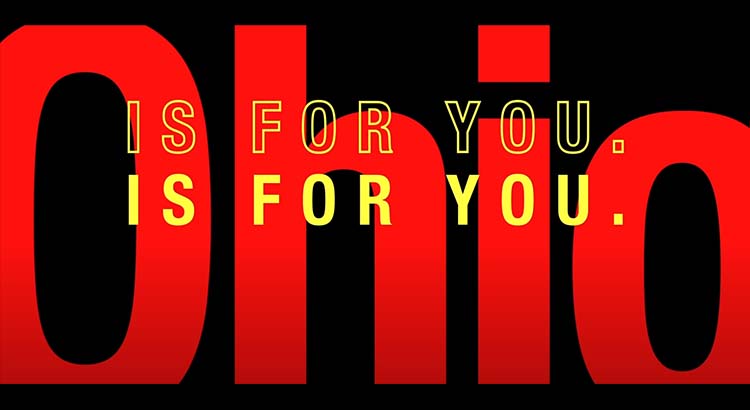 JobsOhio has been promoting its “Ohio is For Leaders” marketing campaign on billboards and in TV advertising. Screenshot from YouTube.
ShareTweet

Ohio’s economic developer, JobsOhio, is quick to say it’s a private, non-profit corporation and it’s quick to add that its hundreds of millions of dollars are private as well.

“JobsOhio is a private nonprofit corporation wholly funded by an independent private source — the profits from the JobsOhio Beverage System (JOBS) liquor enterprise — that JobsOhio purchased in 2013 and manages today,” is how it describes its “unique funding model” on its website.

That statement might deserve a little scrutiny, however, given that the agency works outside the state’s open records law and has made some questionable investments.

In 2017, JobsOhio forgave a $12 million loan to Akron-based FirstEnergy to clean up the site of a coal plant.

That was a few years before federal authorities accused the company of complicity in a $61 million bribery scandal that netted it and related companies a $1.3 billion ratepayer bailout. But it was the same year that a sympathetic Public Utilities Commission allowed politically connected FirstEnergy to tack a new charge onto ratepayers’ bills, supposedly to modernize the power grid.

FirstEnergy never could show it used the money for that purpose and the state Supreme Court later ruled that it was improper. But FirstEnergy was allowed to keep the $460 million it had already collected.

JobsOhio also has poured $67 million into an as-yet unstarted project in Eastern Ohio that would convert molecules in natural gas to plastics and resins, The Columbus Dispatch reported last month.

On the other side of the ledger, JobsOhio played a role this year in securing a big win, a $20 billion investment to make electronic chips in Central Ohio.

But there are questions about how effective the agency has been since it was created in 2011 under then-Gov. John Kasich.

U.S. News and World Report last year ranked state economies using such criteria as employment, business environment and growth over the years leading up to the coronavirus pandemic. Ohio ranked 34th, well into the bottom half of states.

Despite that, JobsOhio employees seem to be doing pretty well.

In fiscal year 2021, JobsOhio’s 106 employees were paid an average of $180,000 a year in salaries and benefits as part of its $19 million payroll, according to its financial statement for the year. It also spent $210 million on economic development, $33 million on marketing and $16 million on professional services.

JobsOhio spokesman Matt Englehart said the state has gotten a good return on the organization’s employees and its expenditures.

“You can see that although we’ve added (people) and increased salaries, we’ve gotten more productive and efficient,” he said in an email. “What hasn’t been disclosed before is that we’ve also increased (return on investment) for the state. In 2018, the projected payroll tax the state received per JobsOhio FTE (as a result of new jobs) was $3 million dollars. In 2021, that rose 66% to $5 million. So yes, more employees earning more, but returning 66% more for the state’s benefit.”

The projections of job creation and payroll tax are JobsOhio’s, and it remains to be seen how accurate or statistically meaningful they are.

It’s also unclear how accurate it is when JobsOhio claims that it’s a private company that’s not using public money.

The entity was created by the legislature as a 501(c)(4) nonprofit. Its board is appointed by Mike DeWine in his public capacity as governor of Ohio. And the money it’s using comes from what at least used to be a public asset — the state’s liquor-franchise monopoly.

Not only did the legislature give JobsOhio the exclusive right to buy the monopoly, it allowed JobsOhio to pay for it out of proceeds from the monopoly. Those funds previously were used to help fund the state government.

Yet Englehart said JobsOhio wasn’t awarded anything by taxpayers.

Englehart said that profit from the liquor monopoly has been used to make $380 million in deferred payments to the state since 2013.

Engelhart said JobsOhio wasn’t awarded anything when the legislature allowed JobsOhio to buy the state’s liquor monopoly using profits from that very monopoly.

“There was no awarding,” he said. “The liquor enterprise was sold to JOBS for 25 years and is no longer a public asset because of that sale.”

JobsOhio faced no other bidders when it received control of the liquor monopoly.

“The Legislative Branch authorized the sale to JobsOhio and the Executive Branch through (the Office of Budget and Management) and the Department of Commerce were directed to execute the sale per (Ohio Revised Code 4313.),” Englehart said.

For at least one jurist, there was no way to dress up the funds JobsOhio is using as anything other than public money. Former Ohio Supreme Court Justice Bill O’Neill wrote a dissent in 2014 as a majority of his colleagues threw out a constitutional challenge to the JobsOhio law. The majority had ruled that those bringing the challenge “failed to show that they have any personal stake in the outcome of this litigation” so they didn’t have standing to bring the case.

But to O’Neill, the court was shirking its duty to protect the public — and the public’s money.

“Hundreds of millions of dollars in public funds are being funneled into a dark hole to be disbursed without public scrutiny, and the highest court in the land is looking the other way,” he wrote. “The Supreme Court of Ohio is the last house on the street, and passing on this case is an abdication of our duty as protectors of the Constitution.”