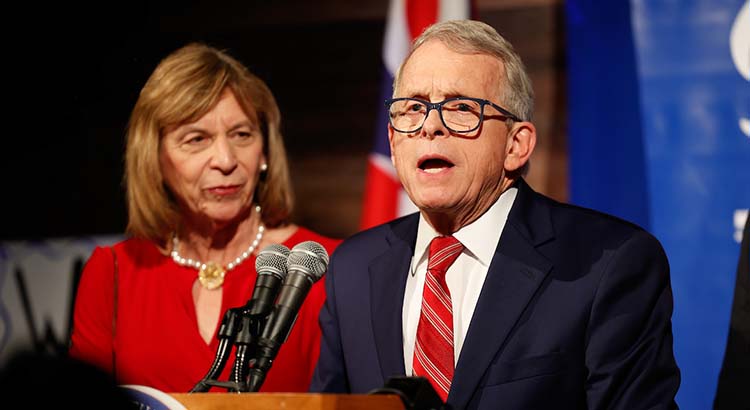 As Ohio negotiates almost a $2 billion incentive package with electronic chip maker Intel, Gov. Mike DeWine owns stock in the company, according to ethics disclosures that were due on Monday. However, the governor declined to say much about the investment beyond the very general information that is required under Ohio ethics law.

Intel in January announced that it would invest at least $20 billion in Central Ohio to build two chip plants and create about 3,000 jobs — great news in a state where the economy has lagged the national average.

But some, including Policy Matters Ohio, have raised concerns that a $1.9 billion incentive package is front-loaded, leaving taxpayers vulnerable if Intel doesn’t live up to its promises.

Asked in March about those concerns, DeWine Press Secretary Dan Tierney pointed out that $650 million is conditioned on job creation and won’t be paid if they don’t materialize. He also said that some of the infrastructure work in the incentive package will be financed by local governments.

But he didn’t address what, in the event the project goes bust, the administration would do to claw back a $600 million “reshoring grant,” or $150 million from JobsOhio.

With so much money at stake, taxpayers might want to know that their representatives at the negotiating table have only their interests in mind. But DeWine’s ethics disclosure makes it impossible to be sure.

Under Ohio law, government officials such as DeWine every year have to disclose every company in which they owned at least $1,000 worth of stock during the previous year. But just knowing DeWine has more than $1,000 worth of Intel stock doesn’t tell you much; it could be just a nominal investment, or it could be a big play that might give him a motive to help Intel do well that conflicts with the best interest of Ohioans.

The DeWine administration has already seen its share of ethics struggles.

Some of his appointees have been implicated in a $61 million bribery scandal that netted a $1.3 billion ratepayer bailout for utility companies.

His son, Supreme Court Justice Pat DeWine, refuses to recuse himself from a case in which Gov. DeWine and other Republicans on the Ohio Redistricting Commission have passed legislative maps that a bipartisan majority of the court have five times ruled to be unconstitutionally gerrymandered. Justice DeWine has voted with the minority to uphold the Republican maps even though several ethics experts have said he has a clear conflict of interest by not recusing himself from the case.

And Gov. DeWine’s Medicaid director, Maureen Corcoran, has refused to disclose just how much stock she owned in two health care giants last year as she awarded them billion-dollar contracts.

Now the governor appears to be following suit. Tierney was asked how much Intel stock DeWine owns.

“The governor has held Intel stock since well prior to his term as Governor,” Tierney said in an email. “As you are aware, the governor has disclosed this pursuant to financial disclosure and ethics laws. The governor has followed these laws and is in compliance with them.”

DeWine’s press secretary was also asked if the governor viewed his Intel ownership as a conflict.

“Intel has sought economic development in Ohio,” Tierney said. “The incentives are with the Department of Development and JobsOhio, not the Governor’s Office. Intel has not sought a state spending contract for services.”

DeWine appoints both the board of JobsOhio and the director of the Department of Development.