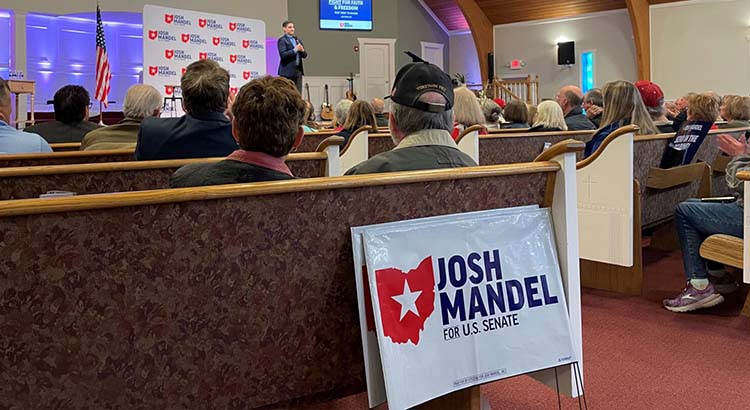 On the campaign trail, on debate stages and on TV ads, Mandel has returned to a three-part formula that sums up his political program: Pro-God, Pro-Gun, Pro-Trump. Curiously, those last two were no-shows in his campaign’s benediction to voters in Columbus. Mandel didn’t bring up guns or the Second Amendment once as he addressed a crowd of more than 100 at High Street Baptist Church Saturday evening. Less curiously perhaps, he’s been talking a lot less about Donald Trump since the former president endorsed J.D. Vance. 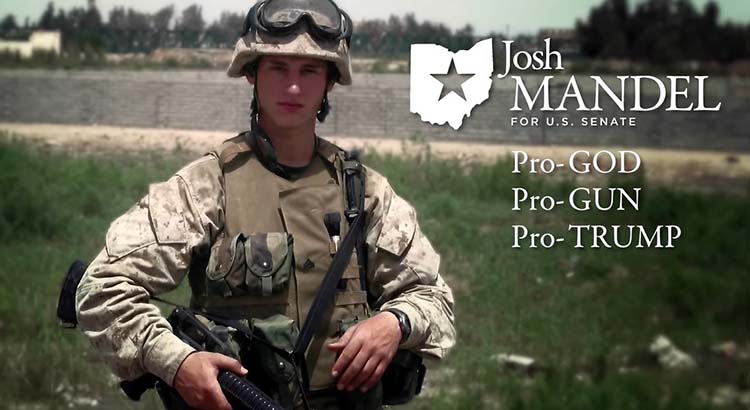 Mandel has repeatedly described himself as Pro-God, Pro-Gun, Pro-Trump. (screen capture of a Mandel campaign ad)

Mandel made up for their absence by leaning heavily into the latest issues to inflame the conservative base.

“Boys are boys and girls are girls,” got the biggest applause of the evening, until he co-opted part of Martin Luther King’s “I have a dream” speech to deride critical race theory. But the response to both paled in comparison to a measure Mandel, as a U.S. Senator, would have nothing to do with.

“Let me tell you what the backpack bill is,” Mandel told the crowd. “This is a bill that says moms and dads, you should have the choice where your kids go to school and if you want to take your kids to a religious school, you should be able to take your tax dollars, put them in your kids backpack, and they should follow your kid to school.”

As it happens, the church where Mandel was speaking runs a Christian Academy for pre-K to 12th grade students.

Mandel also returned to the argument, largely absent since the early days of his campaign, that there’s no separation between church and state, because that phrase doesn’t appear explicitly in the Constitution. Courts, however, have repeatedly interpreted the First Amendment’s establishment clause to draw a bright line between church and state. Mandel raised the issue after the pastor got up on stage to endorse him. He teased that someone would probably call the ACLU, and argued that no church has ever lost its tax exempt status for political activity.

Mandel carved out a lot of time to re-litigate the so-called heartbeat bill. While Mandel was serving as state treasurer, John Kasich was governor, and they found themselves on opposite sides of the legislation despite campaigning against abortion to win office. As treasurer, Mandel had little if any role in state health policy, but he wanted to take leading role. Kasich, on the other hand, vetoed the measure twice. Mandel said the episode showed him the difference between a friend and a champion.

“A friend might be someone you’ve got to drag them along the way and sort of hold their hand and force them to vote the right way,” Mandel argued. “A champion is someone who wakes up every day living and breathing and sleeping an issue.”

Gov. Mike DeWine has since signed the bill. It’s been tied up in the courts ever since.

Mandel’s framing of friends vs. champions was one example of a style vs. substance theme that Mandel and Cruz kept revisiting.

Like a classic call and response sermon, Cruz told the crowd, “everybody sounds good on the campaign trail. But do they walk the walk?”

Scattered voices piped up in agreement and encouragement.

“And listen, when we win majorities in November the job isn’t done,” Cruz continued to more murmurs of approval. “Once we have the majority, we’ve got to do something with them.”

Kathy Mason came down from Delaware with her husband Steve to see Mandel. Before the speakers started, she made a similar point in comparing Vance and Mandel. She brought up Vance’s well-publicized opposition to Trump early on.

“And now this about face? you know, I don’t trust it,” she said. “And Mandel has, you know, has some credentials as far as what he’s already done.”

In the next pew, Darlene Wesley said she liked Mandel because on his stances on abortion and the Second Amendment, but she still wasn’t completely convinced.

“Only because wisdom would dictate let me hear what he has to say,” she explained. “But I’m reasonably sure I’m going to vote for him. But I just, you know, I need to wait.”

Cruz told the crowd about a sermon his father often gives. A man walks across a tightrope, first alone and then with a wheelbarrow, onlookers encouraging him at every turn.

“He says how many of you believe I can walk across this tightrope and back with a man in the wheelbarrow? And the crowd applauds,” Cruz said. “And he points to a man right in front and says get in the wheelbarrow.”

Cruz took this idea, that belief is active rather than passive, to cast the decision of who to support in Ohio’s republican primary in near apocalyptic terms.

“We are blessed to be Americans, but we are also blessed to have the opportunity right now today to fight in a battle that matters,” Cruz argued. “To fight not over little and piddling stakes, not over things that are inconsequential but to fight over whether or not we save the greatest nation in the history of the world.”

By the end of the event, Wesley had made up her mind. She was voting for Mandel.

State of the race

Cruz’s presence on the campaign trail underlines the current schism among Ohio’s conservatives. Vance, in addition to getting a Trump visit a week ago, spent the weekend campaigning with GOP firebrands Rep. Matt Gaetz, R-FL, and Rep. Marjorie Taylor Greene, R-GA.

But before taking the stage in Columbus, Cruz sought to downplay the family row.

“President Trump was a phenomenal president,” Cruz said. “He’s someone I remain very close to, (and I) work very closely with him. He and I are campaigning side by side in races all across the country, and we both agree the country is on the wrong course.”

“From my perspective,” he continued in an underhanded shot at Vance, “I think we should support candidates not just who say the right thing, but who have a record of doing the right thing, and I think that’s what the voters of Ohio are looking for.”

Still the last-minute visits give those dueling endorsements the feel of a simmering proxy war.

On one side, there’s Mandel, who has spent the race daring his Republican opponents to more fervently embrace Trump’s record and rhetoric. On the other, there’s J.D. Vance, who actually got Trump’s endorsement despite roundly condemning him as “cultural heroin,” before making an about face once Trump won the presidency.

Once Vance got the nod, a number of notable Ohio Republicans wrote to Trump begging him to reconsider. With Mike Gibbons, Jane Timken, and Mark Pukita courting Trump’s voters as well, some have speculated Matt Dolan might come out ahead in muddled, divided race.

But while Cruz handled the intra-party divisions with kid gloves, Mandel took the gloves off. Asked about a recent ad criticizing him for backing Republicans like Kasich who are now seen as insufficiently conservative, Mandel said, “I think ads like that reek of desperation.”

“I think J.D. can feel himself spiraling the drain,” he went on, “and that’s what phony fraud politicians do when they’re worried about losing.”