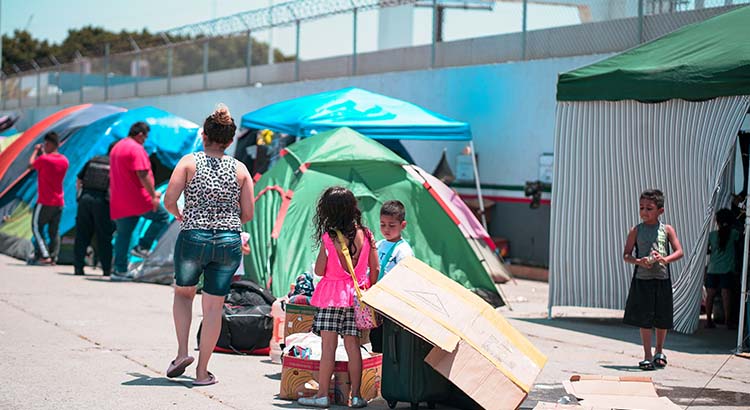 Trump’s former immigration adviser is having a premonition of doom.

Stephen Miller has the dubious distinction of authoring ex-President Trump’s (anti-)immigration policies.  He retweeted news of a Centers for Disease Control announcement last month, saying: “This will mean armageddon on the border. This is how nations end.”

So what on Earth could a public health agency do that merits the forecast of armageddon? What could end the United States of America?

Well, on April 1, the CDC decided to terminate the use of Title 42, the public health order that kept the U.S. border closed to migration for two years. The announcement stated: “After considering current public health conditions and an increased availability of tools to fight COVID-19 (such as highly effective vaccines and therapeutics), the CDC director has determined that an order suspending the right to introduce migrants into the United States is no longer necessary.”

That’s it. That is what Stephen Miller wants us to panic about.

The problem with Title 42, though, and the reason that conservatives are hysterical, is that it was never actually about public health.

If it were, no one would care that it is being lifted. After all, it seems as if most people in our country — especially right-wingers — are ready to move on from the pandemic.

In reality, Title 42 was an opportunity for the Trump administration to close the southern border off to migrants after the big, beautiful wall failed to materialize. It allowed the Department of Homeland Security to turn migrants back from the ports of entry and immediately expel people who crossed between the ports. Through one emergency health order, Trump and Miller found a workaround to screening, to due process, and to legal protection that international and domestic law mandates when someone is arrested at a border.

Human migration is inconvenient for politicians, and Title 42 has been a sureshot way for the White House to avoid accountability for actual policy. Instead, officials just disingenuously shrug at the enormous issues created by a closed border, shake their heads and say: It’s about public health. It’s such convenient rhetoric, in fact, that the Biden administration has kept the policy in place for 15 months in spite of their own narrative that they are restoring human rights to the southern border.

Stephen Miller is a ghoul, but his strategy has been quite useful. Now that Title 42 is in place as a massively effective tool for border control, politicians on both sides of the aisle have reacted with a range of responses from anxiety to outrage, saying now is not the time to lift it.

No one is bothering to cast their panic in terms of public health, and instead they fret about a massive migration event that will overwhelm our border like a tsunami. The media seems more than happy to echo this fear.

Conservatives are blasting the end of Title 42 as creating “open borders,” which is a ridiculous level of fear-mongering, considering the move would be a return to our already highly militarized border.

DHS has a range of tools like immigration court, the asylum office, parole, ICE detention, the Alternative to Detention program, expedited removal, and Remain in Mexico that can be used to maintain control. Some of these methods are more humane than others, and some, like Remain in Mexico, are straight up horrific.

Suggesting that ending Title 42 means our country has “open borders” is willful ignorance of the fact that before the pandemic, we already had some of the most draconian immigration policies worldwide. If conservatives want radically inhumane policies on our border, lifting Title 42 will actually just restore those.

But liberals have also expressed concern. There is a midterm election looming and many Democrats in vulnerable seats are willing to concede to Republican messaging and call for Title 42 to be kept in place. Their rhetoric is a bit softer and generally agrees that Title 42 should be lifted but says the Biden administration needs to have a better plan to deal with the expected influx of migrants beforehand. This ignores the fact that the administration has released a fairly comprehensive plan.

None of this may end up mattering. In late April, a Trump-appointed  District Court Judge in Louisiana issued a perplexing temporary restraining order that seeks to prevent the government from preparing to phase out Title 42 on May 23. There is a larger hearing about the issue set for May 13, but it is in the realm of possibility that the court could order Title 42 to remain in place.

What’s missing from all of this — the court order, the political messaging, and the media coverage — is any pretense that there is a public health element involved. Brazenly attempting to convert a CDC order into an unprecedentedly restrictive immigration policy that destroys the international right to seek asylum should prompt public outrage. Yet recent polls show most Americans — the majority of whom I would wager had no clue about Title 42 during the pandemic — favor keeping Title 42 in place due to a lack of confidence that our government can handle a migrant influx.

My hot take is that even if there is an influx of people at the border, there is no crisis.

The public panic is based on the projection that there could be between 10,000 and 20,000 people per day. While this may end up being true, there is a really strange logic to blaming that on the end of Title 42. The numbers are higher because the border has been closed for so long — and because nearly 2 million people were expelled during the pandemic.

Keeping Title 42 in place is the exact wrong thing to do if our country wants to see manageable numbers at the southern border. We have to deal with the massive group of people created by the closure and create a humane plan to deal with normal migrant flows as that bottleneck clears.

Here’s one possible solution: The United States could parole people in with a pathway to a temporary work permit so that migrants could help address our country’s labor shortage while they wait for their hearings in immigration court.

Hysteria around migration is not mandatory, and we should all be wary of leaders who peddle crisis narratives at the border and stoke our fears to capture votes.

Migration is a human phenomena that will never stop. People are in motion because of global warming, because of a pandemic that has devastated economies, and because of war and unrest. Dealing with people at borders is challenging and inconvenient but does not require inhumanity —  just look at the rational way refugees are being received at Ukraine’s border if you need proof.

If we take our finger off the panic button and make a rational plan, we may be able to see what’s happening on our border as just another chapter in the United States’ long history of immigration.

Allegra Love is an immigration attorney from Santa Fe. She is a graduate of Dartmouth College and the University of New Mexico School of Law. She is the founder of and former director of Santa Fe Dreamers Project, a legal services organization serving immigrants and refugees. Currently she works with the El Paso Immigration Collaborative to represent detained asylum-seekers in the Southwest and in the national movement to abolish immigration detention in the United States.