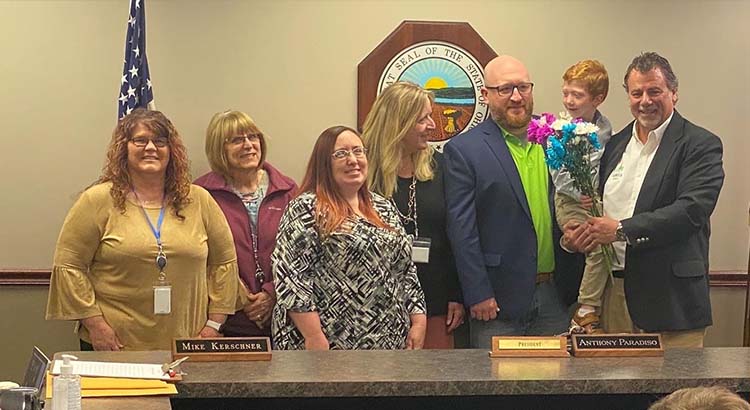 Tiffin, Ohio — The Seneca County Board of Commissioners heard an update from the Great Lakes Community Action Partnership (GLCAP) during Thursday morning’s board session.

GLCAP President/CEO Ruthann House introduced some of her staff and discussed the agency’s impact on the community in 2021.

Commissioner Mike Kerschner thanked House and all of the GLCAP staff in attendance.

“The leadership of Ruthann House has been remarkable,” he said. “GLCAP is one of the greatest assets we have in Seneca County and beyond.”

“Without you and your team, there would be a lot more people struggling in our community,” he said after thanking the staff for all their hard work.

The commissioners also got to meet Emily Runneals and her son Kyizer, who benefits from GLCAP programming.

In other action, the commissioners bid farewell to Tiffin-Seneca Economic Partnership President and CEO David Zak, as this was his last commissioners’ meeting before his final day in the position next Thursday.

Last month, it was announced that Zak had accepted a similar position with the Crawford Partnership for Education and Economic Development.

Zak thanked the board of commissioners for the “amazing partnership” with TSEP.

“I am deeply appreciative to have been able to experience that,” he said.

Zak mentioned some of the memories and successful programs that had a positive impact on the county, including work on improving the county’s bond rating, working with school districts, the Seneca County Justice Center project and the work done to use federal CARES funding to impact local small businesses, nonprofits and individuals.

He said that Seneca County is a “great place to be” and complimented the commissioners for their leadership.

“This (board) is a good group,” Zak said. “The commission takes a big picture view and represents all county residents. You’re not afraid to take risks and be innovative.”

Board President Anthony Paradiso said Zak has set a high bar for the organization and for economic development in Tiffin and Seneca County.

Kerschner said it was “bittersweet” to give Zak his highest recommendation to Crawford County leaders. “I wish you nothing but the best,” he said to Zak.

In other action, the commissioners received two bids for the 2022 Township Road Program which is funded via Issue 1 money.

The engineer’s estimate for the project is $1,078,589. The following bids were received: