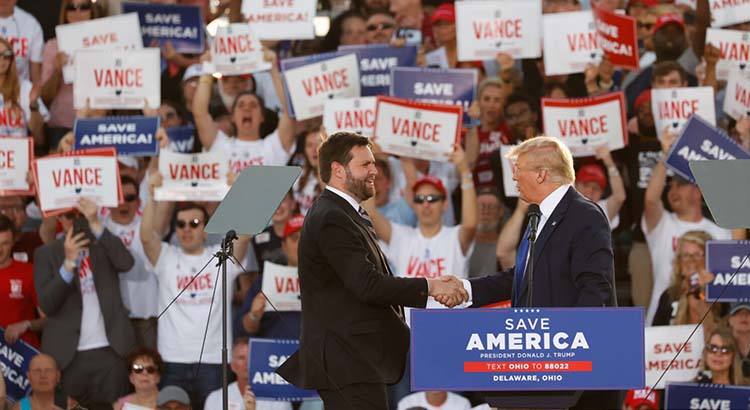 Some of the attendees have begun following Trump from rally to rally like as if he was the Grateful Dead or Phish. Autumn Davidson was wearing a pink baseball cap that said “Trump” in rhinestones.

“It sparkles and it says Trump. What more do you need?” she laughed.

Davidson came up for the day from Louisville. A short trip, she explained, compared with driving to Dallas for a previous rally.  She sold a tattoo removal business last year. As for what she’ll do next, she said she’d let “I’ll let God guide my steps on that one,” but she hasn’t missed the work for a second.

Steven Turner paused for a second to talk, juggling four or five cold bottles of soda that were beginning to sweat in the heat. With a wry half grin, he brought up Q-Anon and his website sheepnesia. Turner came from New York and he estimated there are 100 or 200 people he recognized who pop up at rallies around the country.

Christi Weiss and Theresa Lucas didn’t exactly want to talk. Mike Lindell, the pillow guy, had just walked by and they were eager to track him down for a photo. They live in nearby Sunbury and were wearing matching “women for Trump” t-shirts. Both agreed that they wanted to show Gov. Mike DeWine the door, but they were unmoved by Trump’s recent endorsement of J.D. Vance.

“We love Trump, but he’s not God,” Lucas said. “We have our own minds, and we will make up our own minds. We do appreciate and trust what he says, but we’re not just gonna follow him blindly.”

Trump’s visit, in large part, was meant to build momentum for candidates like Vance — effectively putting the former president on the ballot even if he isn’t seeking office. 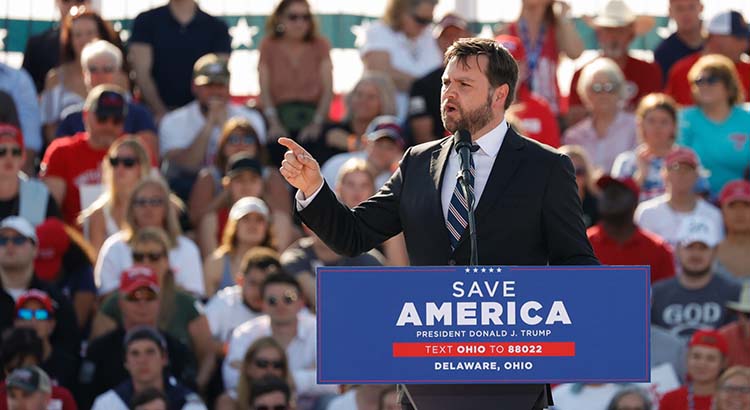 While that might not work on Weiss and Lucas, it made a difference for Joseph Harbolt. He hadn’t been following the Senate race all that closely, he admitted, so Trump’s endorsement of J.D. Vance meant a great deal.

“Being a full Trump supporter since the beginning, yeah, I’m very quick to just say I’ll go with him,” he explained.

Trump’s opening act was a string of local congressmen and GOP congressional candidates hoping to convert their stage time to votes on Election Day. Ohio Republican U.S. Rep. Troy Balderson kicked things off and reminisced about the boost he got from a Trump visit during his 2018 special election. Rep. Mike Carey, R-OH, and candidates Madison Gesiotto Gilbert, Max Miller, and J.D. Vance rounded out the lineup. 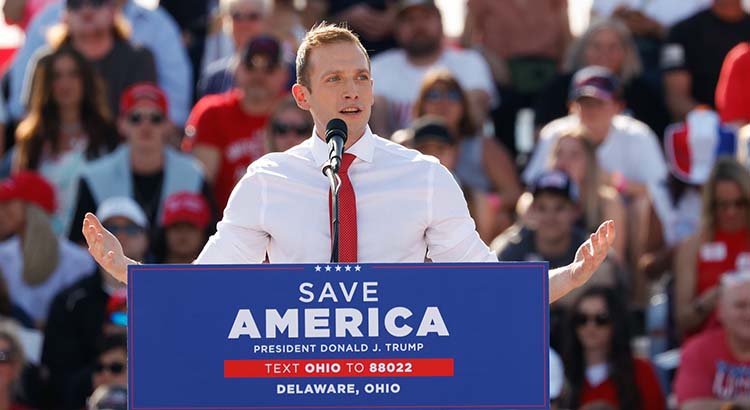 Miller, a former Trump aide, was certainly paying attention during his time in alongside the president. He walked out to Elton John’s Saturday Night’s Alright For Fighting, in a red tie and white dress shirt, sleeves rolled above his elbows. He milked the applause, walking back and forth on the podium, pumping his fist and pointing out into the crowd. Like his former boss, he veered toward the same attacks on the media, “how long did CNN+ last for?” and hyperbolic red-meat attack lines. Fauci is a “criminal” and belongs in prison, America’s exit from Afghanistan was a “surrender” and the “one of the greatest embarrassments in United States history.”

J.D. Vance was a bit subdued in comparison, but used the stage to try out some harsher rhetoric than he’s employed in the race so far. He stacked up a list of grievances that make him sick — relying on “communist China” for goods, an FBI focused on “arresting American citizens” rather than drugs and human trafficking at the border, big tech allegedly stealing the 2020 election, having to purchase foreign oil, the media calling republicans bad names.

“I’m sick, in sum, of the left destroying this country, and I’m sick of the RINO’s in Washington DC who refuse to fight back against it,” Vance told the crowd.

Since securing Trump’s endorsement, Vance has forged further to the right, even co-opting some of the “RINO” hunting rhetoric of his more radically conservative opponent, former state treasurer Josh Mandel.

The opening speakers passed quickly, in a rat-a-tat of 5 or 10 minute speaking slots. The whole program wrapped up more than an hour and a half before Trump was set to speak. Mercifully, he took the stage 15 minutes early.

The speech itself was just as vitriolic, rambling, and digressive as ever. The audience loved it.

At the mere mention of Congressman Jim Jordan, R-OH, half a dozen people were on their feet clapping or waving their hats. Trump criticized the “fake news media” and even more got up, turning to the cameras, screaming insults or waving middle fingers. One unfurled a banner that said “Trump ’24 or before.”

In the course of five minutes, Trump went from bragging about replacing NAFTA, to taking credit for saving a Whirlpool factory, to decrying energy star regulations on dishwashers, to his frustrations with low-flow faucets and shower heads, before making a hard but familiar pivot.

His remarks also served as a reminder of the limits of Trump’s power. While he created this conservative political movement, and he remains its foremost avatar and instigator, he can’t necessarily control it. Late in his speech, Trump referenced “parent’s rights” the latest buzzword for the conservatives’ push to excise any reference to LGBTQ identity in schools.  The crowd erupted.

The chant “save our kids” went up and Trump paused before continuing, “who would even think that would be a subject where it gets the biggest hand of all? Who would think it’s possible? And while we’re at it, we don’t want men competing in women’s sports.”

Again, the crowd roared its approval. 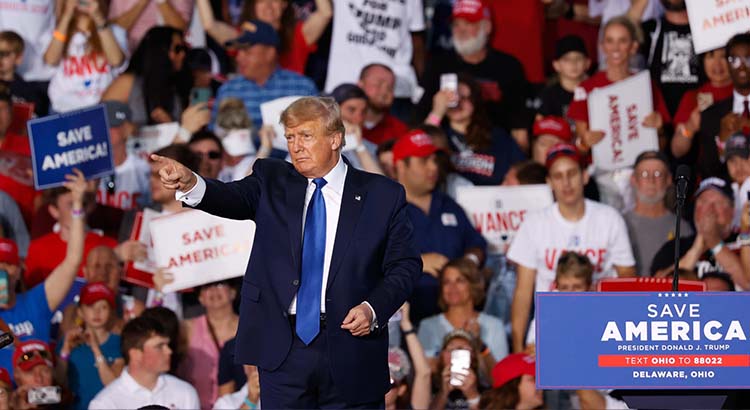 Underscoring the point of his trip, Trump brought Vance and Miller up to speak for a few moments during his own speech. Trump was particularly effusive about Miller.

Back on the stage, Vance told the crowd they need to vote for “Republicans who know what time it is,” a line he’s been trying lately to describe the aggressive, pugilistic pursuit of culture war issues. At a NewsMax townhall last week, he used Florida Governor Ron DeSantis’ bid to strip Disney of a special taxing district in retaliation for opposing the state’s “don’t say gay” legislation as an example of a politician who “knows what time it is.”

“J.D. is really an America First warrior,” Trump told the crowd. “He believes so much in making our country great again, and he’s going to do a job on these horrible people that are running against him.”

Would the real MAGA candidate please stand up?

While Vance has lately become sharper and more conservative in his messaging, he has not embraced the most extreme positions of his opponent Mandel. Throughout the campaign, Mandel has pushed limiting voting to election day, getting rid of voting machines, requiring ID and scrapping mail in ballots.

“Mail-in ballots, long term voting and no voter ID or signature verification is absolutely killing our country our reputation and our elections,” Trump said. “People have to believe in their elections, they have to believe that they were honest.”

“One. Day. Voting. Paper. Ballots,” Trump said later. “And if we’re going to have mail-in ballots we’re never going to have honest elections.”

And while Trump endorsed Mandel’s vision for elections, if not the candidate himself, the former president cast his lot with Secretary of State Frank LaRose, who despite a noticeable rightward lurch recently, has maintained that Ohio elections are secure.

“Despite every effort by those who put politics over principle,” LaRose said in a March tweet, “you’ll have the opportunity to make your voice heard in a secure, accurate, and accessible primary election. No one will take that away from you. Not on my watch.”

LaRose was on hand Saturday but didn’t speak. When Trump singled him out to tell the crowd he had is “complete and total endorsement” Trump didn’t emphasize elections — he thanked LaRose for his role in redistricting.