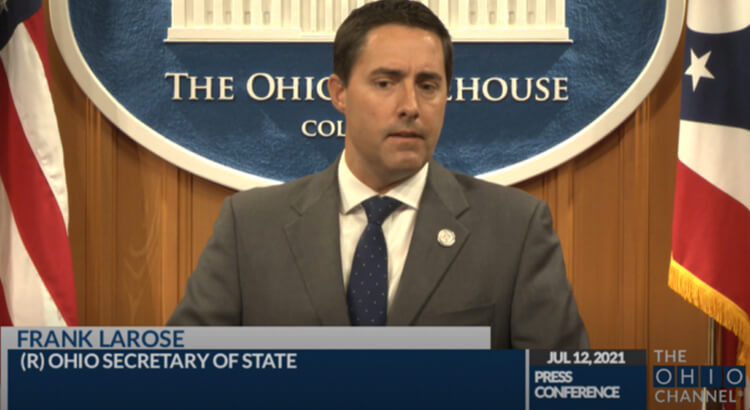 Ohio Secretary of State Frank LaRose on Tuesday denied that he had called for the impeachment of Ohio Supreme Court Chief Justice Maureen O’Connor after she had repeatedly ruled against LaRose and the rest of her fellow Republicans on the Ohio Redistricting Commission.

LaRose’s comments come four days  after he told a group of Union County Republicans that Justice O’Connor had “violated her oath of office” and that for the legislature to impeach her  “may be the right thing to do”.

The state’s top elections official was at the Franklin County Board of Elections on Tuesday as he kicked off early voting for most of this year’s primaries. It won’t include ballots for state legislative candidates because of a dispute over gerrymandering — a fracas over the boundaries of the districts in which members of the state House and Senate will run.

Tired, apparently, of partisan gerrymandering, Ohio voters in 2015 overwhelmingly approved a constitutional amendment that requires districts be drawn so that the partisan makeup of the legislature resembles the partisan breakdown in recent statewide elections.

That’s not how things stand now. Republicans have won recent elections with about 54% of the vote, but they control 65% of the seats in the state House and 78% of the state Senate.

This year, using the new system for the first time, the five Republicans on the seven-member redistricting commission have passed four sets of maps that O’Connor and the three Democrats on the Supreme Court have ruled are too partisan.

Republican Justice Pat DeWine has continued to sit in the case even though several ethics experts have said he has a clear conflict because his father, Gov. Mike DeWine, is a member of the redistricting commission. Justice DeWine has voted in favor of upholding the maps that his father and the other Republicans have passed.

Meanwhile, Republican frustration with O’Connor, who will leave the court at the end of the year, has been boiling over. Some Republican members of the legislature last month floated the idea of impeachment.

Gov. DeWine called the notion “extraordinary” and said it’s a bad idea to talk about removing judges whenever one disagrees with their decisions. But LaRose, the secretary of state, wasn’t so reticent on Friday when asked at a Union County Republican breakfast if O’Connor should be impeached.

“I think that she has not upheld her oath of office, and that to me is a basic test of a public servant,” he said. “That’s up to the state legislature, whether they want to impeach the chief justice or not. I certainly wouldn’t oppose it.”

LaRose stipulated that any impeachment would take so long that “it may feel really good, and it may be the right thing to do because she’s violated her oath of office by making up what she wants the law to say instead of interpreting what it actually says. But I don’t know if it would accomplish much, but I’d be fine with it if they did.”

At Tuesday’s event, LaRose tried to draw a distinction between saying impeachment may be the right thing to do and actually calling for it.

“The thing that I did was not call for anybody to be impeached,” he said. “I answered a question that was asked at a little breakfast gathering where I was with a group of supporters in Union County and what I said was, ‘It’s up to the state legislature.’ There are 33 senators and 99 representatives. If they gather evidence and hold that trial for an impeachment, if they decide as the people’s representatives to do that, then I don’t oppose that.”

LaRose and some legislative Republicans are not alone in being frustrated by the redistricting battle. For the second time, the Supreme Court has ordered members of the commission to show why they shouldn’t be held in contempt for failing to pass maps that comply with the court’s interpretation of the state Constitution. Responses were submitted on Monday.

Some members have argued that they shouldn’t be held individually liable for the actions of a seven-member body they don’t control. And some have argued for the court to simply impose maps on the commission would overstep its powers as a judicial body.

LaRose on Tuesday said holding contempt proceedings is another overreach.

“It’s a ridiculous idea that a co-equal branch of government would be held in contempt for doing our job in a way that the court doesn’t like,” he said. “What we have attempted to do all throughout this process is follow the rules that are set out in the Constitution — and not just the one part of the Constitution that the court seems to be focusing on, but all of the line-drawing rules in the Ohio Constitution.”

LaRose was asked if he was attacking a co-equal body by publicly saying that he, a statewide official, was OK with the impeachment of a Supreme Court justice who had ruled against him.

“Certainly not,” he said. “The Constitution lays out the process for impeaching and removing a justice from the Ohio Supreme Court or other elected officials. That’s not a power I have. I can express my opinion as a citizen just like any of us can and what I was telling this group of supporters in Union County a couple days ago is that if the state legislature found evidence and carried out that process, then I wouldn’t stand in the way of that.

“And I certainly have concerns that the court has delved into really the politics of this more than they should have. But that’s a choice up to the General Assembly and certainly not a choice I get to make. I was simply expressing my opinion,” he said.

“It’s now obvious to anyone that Frank LaRose can’t be trusted to administer organized elections and now when he’s called out for the chaos, he wants to blame the referees,” she said in an email. “To claim ‘it would feel good’ to impeach the chief justice because he disagrees with the court’s rendering is pathetic. For someone who claims to believe in separation of powers, Secretary LaRose has no problem trying to overturn the will of the people.”

LaRose on Tuesday said primary elections for legislative seats most likely will take place in August.