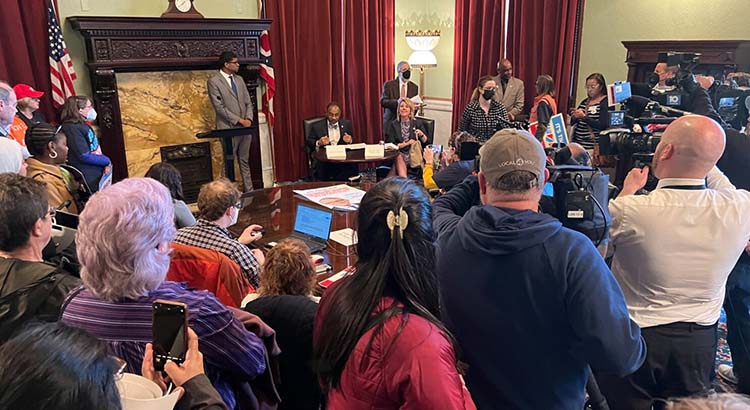 The Ohio Redistricting Commission will reconvene next week for the first time since the state supreme court rejected their fourth attempt at legislative maps April 14.

In a letter to his fellow ORC co-chair state Sen. Vernon Sykes, House Speaker Bob Cupp said it is “unwise” and “not feasible” for the commission to meet before May 4 because of activities around the May 3 primary.

“We already have a split primary. Early voting is at a record low,” Cupp wrote in a letter received by media on Thursday morning. “Holding more meetings prior to May 3 would serve no other purpose than to further confuse the electorate.”

The primary will be split because Statehouse races for Ohio House of Representative and Senate seats do not appear on the May 3 ballot as the legislative maps have been rejected four times by the Ohio Supreme Court.

A second primary will need to be run, potentially in August, for voters to have their say on Statehouse candidates, once a map is adopted.

Cupp jumped to the defense of Ohio Secretary of State Frank LaRose, also a commission member, in saying he had a “huge responsibility” in running the state’s first primary of the year on May 3.

“I am not willing to sacrifice the smooth operation of the primary election for the sole purpose of conducting business that can just as easily be conducted at the Redistricting Commission meeting already scheduled for May 4.”

The official notice for the May 4 hearing didn’t come until 4 p.m. Thursday afternoon.

Also on Thursday afternoon, Sykes sent a response to Cupp’s letter, saying he continues to believe the commission should meet “as soon as possible” and requesting a Friday meeting with a virtual option.

“Whereas it is a statutory duty that Secretary LaRose exercise his responsibilities to ensure we have a well-run election, it is a constitutional obligation that we produce constitutional state legislative districts,” Sykes wrote.

The same day the commission co-chairs were having their back-and-forth over a new meeting date, Ohio voters were asking for a renewed and better process.

A public forum was held by Sykes and House Minority Leader Allison Russo in a Senate conference room Thursday afternoon, where dozens of people, many holding signs demanding “fair districts” and homemade signs accusing the GOP members of the commission of not acting in good faith.

Captain Phil Crane said through his military service and watching the Jan. 6 insurrection while abroad, he saw that due diligence toward democracy was needed at home as well. Redistricting and putting together a constitutional legislative map is a part of that, he said.

“I hope that part of your motivation in this is not just to make this democracy reflect the oath that myself and my peers swore to protect, but to prevent the next cohort of soldiers that are sent to these far-flung regions not to come back and wonder what their friends died for,” Crane told Russo and Sykes, while addressing the commission as well.

Pat Krummrich said she’s attended several meetings during the commission’s tenure after noticing the power of the supermajority in pushing back against gun control, and compared it to a “Netflix miniseries.”

“It was clear after one or two hearings, you could see that the plan all along … on the part of the majority … was to drag everything out, so it would get kicked to the (U.S. District Court) and (the GOP) would end up getting what they want and be able to negate the rest of our votes,” Krummrich said.

Krummrich was referring to the three-judge panel which has said if the ORC doesn’t get a new map approved by May 28, they will institute a previously rejected one to be used for this election.

The ORC is set to meet at 2 p.m. on May in Room 313 of the Ohio Statehouse, also called the House Finance Hearing room.