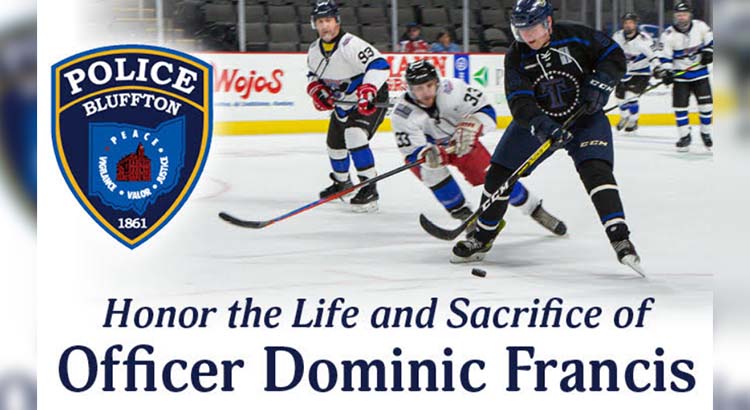 Findlay, Ohio — The Cube Ice Arena in Findlay is set to welcome the Hockey Helping Heroes initiative of the First Responder Face-Off Foundation to town on Friday, May 6.

The event features a charity hockey game between the FOP 109 Warthogs vs. the Toledo Police hockey team. Proceeds from the game benefit the family of Officer Dominic Francis of the Bluffton Police Department. Officer Francis was killed in the line of duty March 31, 2022 and was a member of the Fort Findlay FOP Lodge #20.

“Any time we lose an Officer, there is a tremendous sense of loss within a community. When that tragedy happens in a smaller community, that impact is deeply felt” said Don Zender, Director of the First Responder Face-Off Foundation.

The non-profit formed the Hockey Helping Heroes initiative in Columbus to showcase First Responder hockey and bring awareness to the various charity and benefit games that public safety hockey teams across the State of Ohio participate in annually.

Doors open at 6pm with puck drop slated for 7pm.  Seating and ticketing will be General Admission with a donation at the door.  The game will also feature raffle prizes, a 50/50 and an in-game Chuck-A-Puck contest.

“We are deeply saddened by the loss of fellow Fort Findlay FOP Lodge member and Officer, Dominic Francis. Being able to raise funds for his family is an honor,” said David Hill, board president of the Lodge.

Zender said “hockey is a sport that tends to bring people together in a fun yet competitive environment. When our police teams join together for these games, we’re able to bring a message of unity and hope through hockey to a community that is still learning to heal”.

Individuals who wish to make a donation who are unable to attend the game are encouraged to visit www.fortfindlayfop20.org.