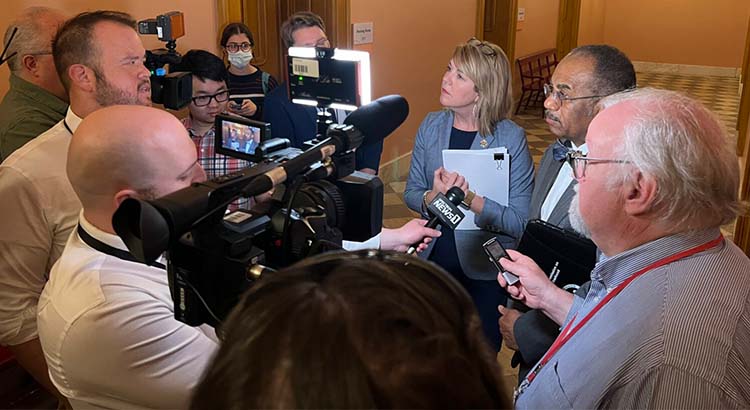 Members of the Ohio Redistricting Commission have not publicly announced any plans to meet and discuss legislative redistricting, despite requests by Democratic members, and a mandate by the Ohio Supreme Court.

Commission co-chair, state Sen. Vernon Sykes, D-Akron, and House Minority Leader Allison Russo, D-Upper Arlington, met with reporters Monday outside the committee room that has been used for ORC meetings, the most recent of which was March 28, when a simple majority passed a fourth version of legislative maps.

Those maps were subsequently rejected as unconstitutional by a majority of Ohio Supreme Court justices, who then gave the commission until May 6 to come up with a new plan.

Since then, a three-judge panel in U.S. District Court has said unless a plan is in place by May 28, the state will be ordered to use the third set of maps passed by the ORC, also rejected by the state’s high court.

“This is a state process, these are state legislative maps,” Russo said. “This is, I think, terrible precedent that is being set that we will have federal courts come and overrule what our state process is in these partisan gerrymandering cases.”

The two Democrats asked the rest of the commission members to meet with them and start the legislative process again, but no other members showed up Monday morning. Commission rules state that three members are needed to call for a meeting of the whole.

Sykes said fellow co-chair, House Speaker Bob Cupp, agreed to talk with Sykes this week about the future of the process. A spokesperson confirmed the Friday conversation, but said a public meeting has yet to be scheduled.

“We’ll be sure to let you know when a meeting is scheduled,” said Aaron Mulvey, spokesperson for Cupp.

Secretary of State Frank LaRose’s spokesperson simply said he had no plans to attend the Monday event with Sykes and Russo, and a spokesperson for Senate President Matt Huffman said there was “no meeting scheduled this morning.”

Any questions about official meetings would be for the co-chairs, spokesperson John Fortney said.

Gov. Mike DeWine’s office had previously told reporters he had a scheduling conflict.

Requests for follow-up comments from Auditor Keith Faber’s office went unanswered, but he had previously stated through a spokesperson he would not be available Monday morning.

While the date for Statehouse races to be on a primary ballot is still up in the air, all other races in the state are continuing on the May 3 primary ballots. Early and absentee voting is ongoing for those races.