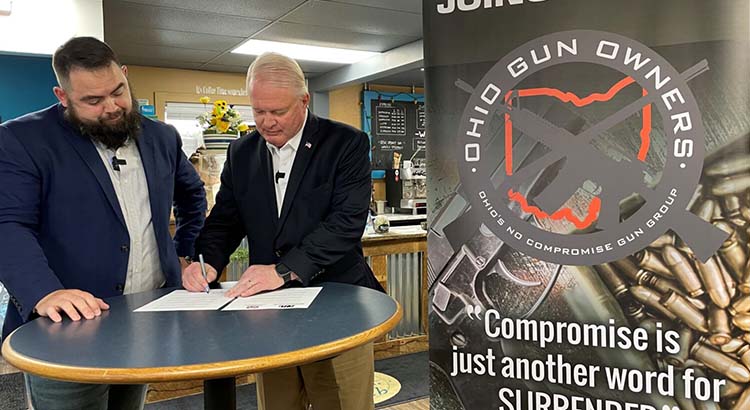 “There’s been a push by some moderate Republicans to pass red flag gun confiscation laws,” Ohio Gun Owners executive director Chris Dorr said. “Rob Portman was a vocal proponent of that. I mean the danger is that you have Republicans pushing this stuff.”

Standing before a banner reading “compromise is just another word for SURRENDER,” and in front of cellphone broadcasting his signature on Facebook, Gibbons cut in.

“We have a fundamental right in this country to due process,” Gibbons said.

By signing Gibbons also committed to opposing a ban on assault weapons or high-capacity magazines, as well as supporting national stand your ground legislation and abolishing the Bureau of Alcohol, Tobacco, Firearms and Explosives.

Dorr’s organization takes a maximalist position on gun rights, and they regularly lobby for legislation in the Ohio Statehouse. The organization even wrote the legislative testimony two lawmakers used to introduce their permitless carry bill last year.

Gibbons may not dive as far into the weeds on the campaign trail, but his position on gun rights is no less strident.

“I don’t think guns in the Second Amendment is about hunting or about self-defense even,” he told a crowd in Bellefontaine last month. “It’s our firewall against tyranny.”

“I know,” he insisted a moment later, “and I believe, that our rights come from Almighty God and not from government.”

And despite the crush of the final few days of campaigning — Gibbons’ team explained they had to rush out to cut a new ad in between other events that day — he’s also not the only candidate to sign in-person. That might offer a glimpse of where the race stands for Gibbons, though. Republican gubernatorial candidates Jim Renacci, Joe Blystone and Ron Hood, all vying for any shred of advantage against incumbent Gov. Mike DeWine, showed up for similar livestream signings earlier this week.

Recent polling from the Trafalgar group put Gibbons well behind Josh Mandel and J.D. Vance, and that was before Donald Trump endorsed the latter. Since then, a Super PAC backing Vance shared another survey suggesting Vance is moving into the lead.

“Starting this campaign, we said, if Trump endorses we hope we get it,” Gibbons said. “If he stays out of it, that’s second best, but third best is that he endorses J.D. Vance because we think we can beat him.”

In March, ahead of the former president’s decision, Gibbons poured another $5 million of his own money into his campaign bringing his total commitment to more than $16 million. He joked that he tells his kids, “Hey, I’m out spending your inheritance.”

Meanwhile, venture capitalist Peter Thiel — already Vance’s biggest political contributor — put another $3.5 million behind Vance after the Trump endorsement came in. Thiel has so far put $13.5 million into Protect Ohio Values, the same Super PAC that funded the poll suggesting Vance is moving into the lead.

Gibbons tried to turn those eye-popping amounts to his advantage.

“Do you think that might somehow change J.D. Vance’s direction on a given vote or on a given issue if Peter Thiel feels some way?” Gibbons wondered aloud.