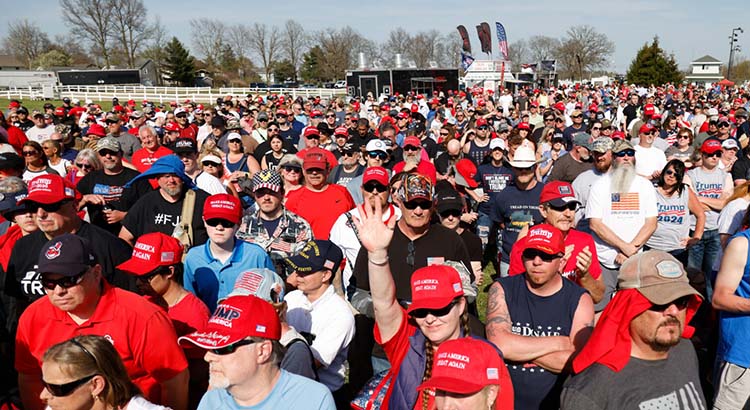 DELAWARE, OH — APRIL 23: Trump supporters spent many hours in the hot sun at the Save America Rally featuring the former president, April 23, 2022, at the Delaware County Fairgrounds, Delaware, Ohio. (Photo by Graham Stokes, for the Ohio Capital Journal.)
ShareTweet

Amid the maniacal bids to out-conservative one another, and the near fisticuffs, perhaps the most abiding feature of this year’s Republican U.S. Senate primary has been voters’ uncertainty. In a crowded field it might seem that voters would have an easy time finding a candidate whose message resonates. Instead, the limited polling available keeps showing double digit undecideds.

The latest poll, from Fox News, surveyed 906 people on landlines and cell phones over four days last week — one quarter of respondents counted themselves undecided. Another, from Blueprint Polling, spoke with 634 people during a similar timeframe and found a third of respondents hadn’t made up their mind. The smallest recent share of undecideds — 13% in a Trafalgar Group poll from two weeks ago — still outstripped all but three candidates, and the undecided share was within the margin of error for the third-place finisher.

A week and a half ago, former President Donald Trump attempted to clarify the race by endorsing J.D. Vance, and then last weekend he hosted a rally in Delaware urging his supporters to fall in line. But while Mindy Peck was ready to vote for Joe Blystone in the governor’s race, she was noncommittal about voting for Vance.

Scott Miller, a teacher from nearby Marion, said he liked Vance better than Josh Mandel, Mike Gibbons or Jane Timken, but the candidate he really liked was Mark Pukita.

“I’m still undecided,” Miller explained. “I’m here to listen to Vance today. If I’m not impressed with what I hear, you know, Pukita will still have my vote.”

Outside the Franklin County Board of Elections Wednesday Conrad Cooper explained he didn’t have a problem deciding at all. He wore a Vietnam veteran ball cap and described himself as a “Trumpster,” but instead of Vance, Cooper voted for former state treasurer Josh Mandel.

“Well, he’s entitled to his opinion,” Cooper said of Trump. “Some of his opinions I don’t agree with. He has what I would call a foot-in-mouth disease sometimes. You can tell him I said that — he’d probably agree with me.”

Bert Collard explained he was looking for a “bean counter.” He voted for Mandel, too.

“Getting the money straight was the main thing, and like I said, I’m not voting for personality, I’m voting for the balanced budget thing.”

And Trump’s decision on who to back didn’t do much for him either.

“I was actually going to go to that Trump rally,” he explained. “And then as soon as Trump endorsed that Vance guy, I said, Man, I’m not going there and wasting my damn time.”

Another couple who didn’t want to share their names said they voted for Dolan because he was the only one who wasn’t emphasizing divisions and who they could see putting voters ahead of partisan impulses.

And their decision might offer a hint at why so many voters remain undecided so late in the race. Even though there are a lot of options to choose from, many of the candidates are offering voters a pretty similar message: “I’m the real conservative.”

In the waning days of the campaign, candidates are trying to burnish those credentials with surrogates like Rep. Marjorie Taylor Greene, R-GA, Rep. Matt Gaetz, R-FL, and Sen. Ted Cruz, R-TX, visiting the state to stump for their favored candidates.