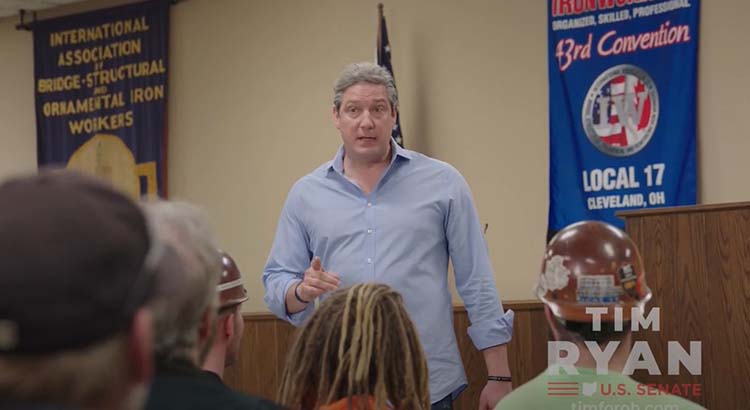 In staccato repetition, Democratic Senate hopeful Tim Ryan insists the country’s primary challenge boils down to one word: China. But the Youngstown-area congressman’s framing of the issue is raising concerns within the Asian American community.

Sharon Kim, from the organization Asian American Midwest Progressives, argued Ryan’s ad conflates legitimate critiques of the Chinese government with the actions of American corporations. Instead the ad pins the blame for lost jobs and rising inflation on China.

“There is a clear distinction between inflating China threat narratives to feed racism in order to win votes, and legitimate critiques of Chinese government officials and businesses,” she argued. “He absolutely could’ve made a different choice.”

And the stakes are high, she argued. Investing an entire country with fault invites racism, and Kim noted the impacts are felt throughout the AAPI community. She brought up the 1982 murder of Vincent Chin, a Chinese-American man killed by two white autoworkers upset at the success of the Japanese auto industry.

More recently, former president Donald Trump’s anti-China rhetoric in response to COVID-19 has led to a sharp uptick in violence or hate directed at Asian Americans. In a press release, AAMP cites data from the organization Stop AAPI Hate which shows 128 anti-Asian hate incidents in Ohio between the start of the pandemic and December of last year.

On Instagram, Ryan’s Democratic primary competitor Morgan Harper made the Trump connection explicitly — cutting back and forth between clips of Ryan’s ad and the former president repeatedly invoking “China.”

“We will not win by trying to be Republicans,” Harper wrote in the caption.

AAMP has endorsed Harper in the primary election. They noted the Ryan campaign didn’t respond to their invitations to engage in the endorsement process.

In an emailed statement, Ryan defended the advertisement.

“I’ve spent my entire career sounding the alarm on China, who — thanks to a concerted strategy by their Communist government that has included currency manipulation, intellectual property theft, and artificially depressed wages, use of child labor, and brutal working conditions — has been our greatest economic adversary for 40 years,” Ryan said.

Asian American kids are being bullied; Asian American elders are being attacked and killed. It’s unacceptable. We must join together and say in no uncertain terms: hate has no home here. #StopAsianHate.https://t.co/RVaUTkC0Xl

He insisted the ad was directed at the government of China rather than people of Chinese descent. Ryan also noted he’s spoken out about AAPI violence and he’s voted for a resolution condemning it.

His campaign also pointed to past ads and statements from Sen. Sherrod Brown, D-OH, denouncing the Chinese government for currency manipulation and other unfair trade practices.

In addition to criticizing the ad’s emphasis on China, Kim argued she and other AAPI people don’t see themselves depicted in it. Throughout, Ryan is shown addressing groups of people — most of them white, with factory floors, hardhats, or banners offering a nod to union labor.

“I’m an Ohioan,” Kim said with a laugh. “I don’t see myself in that ad, he’s clearly not speaking to me. Imagine what all of the Ohio AAPI folk are thinking when they see that as well.”

The lack of representation rankles, but Kim also argued it’s not great politics. Although Asian-Americans make up a tiny sliver of the state’s overall population, in the 2020 census it was the fastest growing ethnic group.

AAMP is urging the Ryan campaign to pull the ad and meet with them or other AAPI groups. Ryan’s campaign didn’t address removing the ad, but said they welcome the chance to meet with AAPI workers and community organizations.