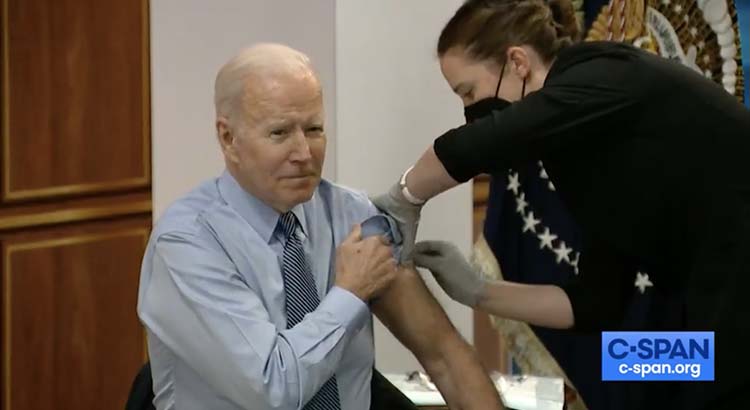 Speaking from the White House, Biden said that without a bipartisan agreement on new funding, the federal government will need to roll back or end programs meant to curb the spread of the virus.

“The consequences of inaction are severe and they’ll only grow with time. But it doesn’t have to be that way,” Biden said.

Biden also rolled up his sleeve and got his second booster shot from a member of the White House medical unit, on camera.

The move, meant to encourage people to keep up-to-date on their COVID-19 vaccines, came one day after the Food and Drug Administration and Centers for Disease Control and Prevention recommended a second booster dose for people over 50 and those who are immunocompromised.

The funding shortfall, Biden noted, has already forced his administration to reduce the amount of monoclonal antibodies it sends to state governments. Without new funding, the supply would begin to run out in two months at the end of May.

The U.S. government would not be able to sustain testing capacity beyond June and preventive treatments for immunocompromised individuals would begin to run out this fall, he said.

The vaccine supply is stable for now, but Biden added it would begin to run out in the fall without new funding.

“Americans are back to living their lives again. We can’t surrender that now,” he said.

Democrats and Republicans in Congress have been trying for weeks to reach agreement on billions more in pandemic relief funding.

“We’re not yet at the finish line, but we’ll continue working throughout the day,” Schumer said. “The consequences of not getting COVID funding are really serious, scary almost.”

Missouri GOP Sen. Roy Blunt, the top Republican on the panel that funds the Health and Human Services Department, said Tuesday that he’s met with Romney to detail what would happen if the federal government were to use funding from prior pandemic relief bills to pay for new funding in this bill.

Senate Minority Leader Mitch McConnell, a Kentucky Republican, said Tuesday that the new COVID-19 funding bill needs to be “entirely paid for out of money that’s already in the pipeline by reprogramming it for whatever amount [Democrats] can justify to get the job done.”

Democratic and Republican leaders in Congress did reach a bipartisan agreement for $15.6 billion in COVID-19 funding earlier this month.

But Speaker Nancy Pelosi pulled that funding from a larger government spending package after numerous lawmakers expressed frustration that party leaders had agreed to claw back previously approved pandemic relief funding to states. The allocations, which Congress had already approved, had gone out to some states, but not others.

The Biden administration has since warned that if Congress doesn’t provide the full $22.5 billion it requested in early March, the federal government would have to begin rolling back free COVID-19 prevention and treatment programs.

Biden on Wednesday pleaded with lawmakers not to wait until the country is in the middle of another COVID-19 surge to provide more funding, saying that would be too late.

Biden also touted the new website as a “one-stop-shop” for Americans to get information about the pandemic.

The website, covid.gov, has a search feature at the top that allows people to type in their county to find out whether the Centers for Disease Control and Prevention classifies the area as low, medium or high transmission.

People in low and medium areas don’t need to wear masks indoors in public spaces, though the CDC recommends wearing a good quality mask over the nose and mouth in places with high transmission.

The “toolkit” section of the website, located lower on the homepage, includes information about masks, testing, treatment and vaccines. The website doesn’t include much information on either of the four topics, but does link to already existing government websites if users want more information.

The website is available in English, Spanish and Simplified Chinese.

Biden noted the website also includes information about locations that provide testing and treatments for COVID-19 —  the “test to treat” program he mentioned in his State of the Union address.

“There are pharmacies and other places in your neighborhood where you can get tested and if you’re positive, you can get life-saving treatments all in one stop,” he said. “We’ve already stood up 2,000 test-and-treat sites across the country.”