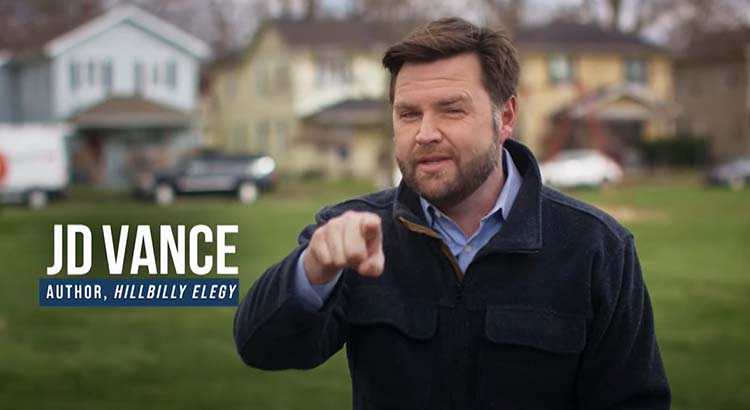 J.D. Vance in his first ad of the U.S. Senate primary campaign
ShareTweet

In his first campaign ad of this year’s raucous Senate primary, J.D. Vance stands in a park, a row of homes slightly out of focus behind him, and he looks straight into the camera.

“Are you a racist?” he asks, pointing at the viewer. “Do you hate Mexicans?”

Voting has begun in Ohio’s primary elections. The Republican Senate primary has been particularly contentious as candidates have staked out positions meant to distinguish themselves in the seven-way race.

Some 1,600 miles from the country’s edge, memoirist and investor J.D. Vance has made the southern border the centerpiece of his Senate bid. His policy vision, elaborated on the campaign trail and in debates, includes three planks meant to reduce illegal immigration and the flow of drugs. Vance argues for completing the border wall, labeling cartels terrorist organizations and blocking welfare for people who cross the border illegally.

No issue has separated Vance from the pack like the war in Ukraine. While other candidates call for harsher sanctions and additional support—up to a “European-led” no fly zone—Vance remains skeptical, and he regularly uses the issue to pivot to the southern border.

“Congressional Republicans and Democrats refused to give Donald Trump $4 billion for a U.S. border wall over four years,” Vance said during a debate late last month, “while fentanyl, illegal drugs and tons of other problems poured into this country killing our citizens. They gave Joe Biden $14 billion for Ukraine in one week. That suggests some pretty messed up priorities.”

Vance, like many Republicans, contends the border is “open,” and that President Biden’s policies have led to a surge in immigration and drugs. The Republican National Committee made a similar point in a tweet checked by PolitiFact earlier this year—they rated the claim mostly false.

More immigrants are showing up at the border, but Customs and Border Protection also notes their figures “somewhat overstate the number of unique individuals” because recidivism has jumped as well. Meanwhile, the majority of arrivals are being turned away under Title 42, a health provision invoked during the pandemic by the Trump administration. This month, federal health officials announced that policy would end in late May.

All that said, it’s far from clear that a wall stretching from the Gulf of Mexico to San Diego, as Vance has called for, would stem the flow of people or drugs. In an article for the non-partisan Migration Policy Institute, Élisabeth Vallet argued their persistence around the world operates on a kind of circular logic.

“They do not allow for a lasting halt to the flows of people and goods they are supposed to stop,” she said. “Instead, border walls get circumvented and breached. Yet each time they are, is, to their supporters, a demonstration of their necessity.”

When it comes to drugs, a wall seems unlikely to reduce trafficking. The latest DEA national drug threat assessment notes the most common way smugglers bring drugs into the country is legal ports of entry. Their data on fentanyl seizures from 2019 showed a difference of about 10 to 1 in fentanyl found at ports of entry as compared to what was seized between legal border crossings.

Vance suggests the U.S. military is the right tool to fight the drug cartels producing and smuggling drugs into the U.S.

“We need to declare the Mexican drug cartels a terrorist organization because that’s exactly what they are,” he argued on the debate stage. “It allows our military to go to Mexico, to go on our southern border, and actually do battle with them.”

It’s notable that Vance, who argues against involvement in Ukraine over concerns that U.S. soldiers could eventually be dragged into that conflict, readily suggests deploying troops in a different nation to pursue American interests.

Speaking after the debate, he justified his position by arguing, “One of them very directly affects our vital national security interests, one of them kills our people, and the other doesn’t.”

Vanda Felbab-Brown, a senior fellow at the Brookings Institution and director of its initiative on non-state armed actors, said Vance has put his finger on a useful lever, but his plan falls apart after that.

She said designating cartels as terrorist organizations has been floated and rejected by both the Obama and Trump administrations.

“The designation would really produce very little to no new additional policy tools,” Felbab-Brown said. “But at the same time (it) would significantly complicate various dimensions of U.S. foreign policy.”

The designation gives government officials financial tools to pursue those providing “material support” to a terrorist organization, but Felbab-Brown contends they’re duplicative of measures already in place against the cartels.

Meanwhile, it would make any kind of support in the region precarious. Initiatives encouraging farmers to grow corn rather than poppies, for instance, could prove difficult, because the cartel might steal resources meant for the farmers.

Still, Felbab-Brown acknowledges that there is some value in a terrorist designation — she just sees it a bargaining tool rather than a precursor to deployment.

“I myself have repeatedly suggested that we consider using the threat of the designation,” she explained. “Not because this will have any impact on the behavior of the cartels or their activity, but as a pressure on the Mexican government to start cooperating with our counternarcotic efforts.”

The Mexican government under President Andrés Manuel López Obrador, she explained, has largely stepped back for those drug intervention efforts. Last year the U.S. and Mexico signed a cooperative framework to that end. Felbab-Brown said it’s a step in the right direction, but still likely short of what’s needed.

Felbab-Brown dismisses out of hand Vance’s idea of U.S. troops dropping into a sovereign neighbor. She also noted the U.S. military’s only direct counternarcotic effort was in Afghanistan, and it wasn’t particularly successful. Like the financial aspects of a terrorist designation, she argued existing tools, in form of agencies like the DEA, are better equipped to deal with cartels.

From the outset, it’s important to note that undocumented immigrants are not eligible for the bulk of federal benefits. Food benefits through SNAP, monetary support through TANF and non-emergency medical coverage from Medicaid are all off the table for people living in the U.S. illegally. But to Vance, the prospect of federal benefits — what he terms American generosity — is a significant lure for immigrants.

“That’s one of the reasons why people keep coming in, is because they know they’re going to benefit from that generosity,” he told a crowd in New Albany last month. “If you stop that spigot, you actually make it a lot more easy to control the southern border.”

Pressed on his claims that undocumented immigrants are receiving benefits after a recent debate Vance argued there are too many “loopholes” in current policy.

He mentioned Section 8 housing vouchers as an example. While it’s true that mixed households can receive support, that support is prorated based on the number of ineligible family members.

Laurence Benenson with the National Immigration Forum fundamentally rejects Vance’s characterization of immigrants’ motivations for coming to the U.S.

“They’re not coming here just to get federal benefits,” Benenson said. “Immigrants for the most part come to the United States to work, to be reunited with family, to build a better life for themselves and their families.”

The Forum is pro-immigration, but it’s not a left leaning organization. They focus on organizing support among moderates and conservatives in faith, law enforcement and business communities — what they call a bibles, badges and business campaign.

Benenson reiterated the point that undocumented immigrants are ineligible for nearly all federal programs, and he added that even lawful permanent residents have to wait five years before gaining access to support programs.

As for whether U.S. born children of undocumented parents receiving benefits represents a loophole, Benenson pushed back forcefully. He argued withholding benefits from citizen children because their parents are undocumented would raise equal protection issues under the 14th Amendment.

“The government can’t arbitrarily go in and say we’re going to take a subsection of U.S. citizens and deny them benefits we’re providing to other people,” Benenson said.

At a debate last week the moderator asked Vance how the GOP could attract more minority voters. It might seem reasonable to expect him to have steer clear of immigration policy but instead he did the opposite.

Vance argued the way to bring in minority voters is “delivering on an agenda of economic prosperity,” and he immediately invoked Trump’s support among Latino voters despite his stance on immigration.

In a GOP primary, harsh immigration rhetoric is preaching to the choir, but Vance argued Trump’s success demonstrates that Latino voters, like any other voter, want a strong border. So long as Republicans present a strong economic message, he argued, they can continue to grow their coalition.

In about three weeks, the election day returns will start rolling in, and we’ll get to see how many in that pool of undecided voters liked what they heard from Vance. Whether he, or any other Republican candidate, can replicate Trump’s success with the same playbook will have to wait a few more months.