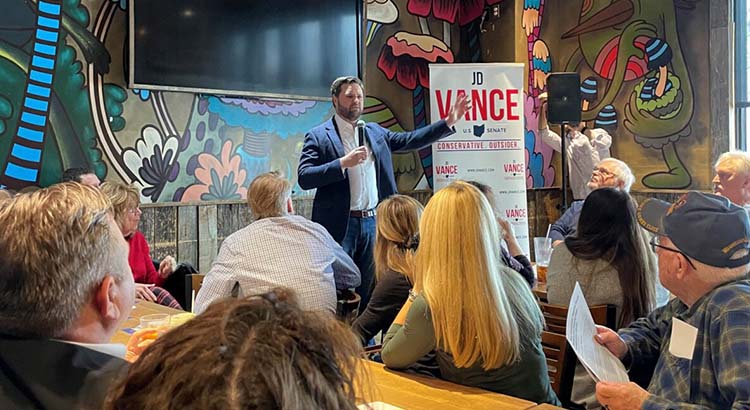 In between debates, Republican U.S. Senate candidate J.D. Vance is continuing his “No B.S.” Tour around the state. Wednesday he visited the New Albany Mellow Mushroom to talk to a crowd of about 50.

With so much in flux due to redistricting, it might come as a surprise that Ohio’s primary election is right around the corner. Assuming the election doesn’t get pushed back, early voting begins in less than two weeks. And with Election Day looming, candidates are shifting gears somewhat. Rather than focusing on introductions, they’re working to contrast themselves against opponents and extend their reach to more voters.

In New Albany, Vance delivered a version of his stump speech that hit many of the same points he was making two months ago, but with a rightward tilt. He folded in a few conspiratorial whistles, like Hunter Biden’s laptop and decrying Jan. 6th defendants awaiting trial in jail. He’s even adopted some of former state Treasurer Josh Mandel’s restrictive voting policy, calling for limiting voting to Election Day.

Vance also covered his isolationist view of how to respond to the war in Ukraine, perhaps his biggest point of departure in a crowded field of candidates. He called out Mike Gibbons and Josh Mandel specifically for their support of a “European-led” no fly zone.

“This sounds nice in theory — like we asked the Russians not to fly planes over Ukraine,” Vance argued. “What it means in practice, is that European jets, and eventually American jets, because we’re going to be called upon when the Europeans get shot down, we’re going to be in a hot war with the Russians.”

His point that “American boys and girls” shouldn’t go to fight was his first applause line of the day.

Ukraine also offers a chance to see how Vance’s delivery has changed. Speaking after the event, Vance dismissed this shift, but his posture now is a far cry from the “I don’t really care,” he tossed off in an interview about Ukraine prior to Russia’s invasion. His actual position hasn’t changed — which his opponents seized on during a debate this week — but he’s expressing more sympathy for Ukrainians as the conflict escalates.

The event also demonstrated how these attempts to stand out can backfire. During the question-and-answer portion of the event, one attendee brought up the confrontation between Mandel and Gibbons at a forum last week. While Mandel’s repeated attacks over Gibbons’ investment holdings didn’t make the audience member feel better about Mandel, it did plant some doubts in his mind about Gibbons. This was found money for Vance, who reinforced the point that Gibbons has investments in China and has done business deals there in the past.

“I don’t want to give up on Americans and invest in China because the Chinese have been smart and our leaders have been stupid,” Vance said. “I want our leaders to stop being stupid, right?”

In his responses since the Mandel confrontation, Gibbons hasn’t denied his own holdings but has instead emphasized Mandel’s “hypocrisy.” He argues Mandel has reported investments of his own tied to China. Those investments include Time Warner, General Electric and Pfizer.

Vance’s tour continues through the rest of this week with stops in Mason and Kettering. He’ll join the other leading GOP candidates for another debate Monday in Wilberforce.