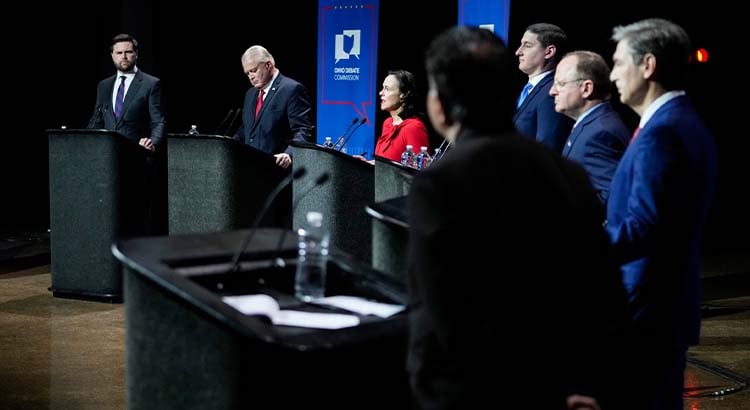 In Wilberforce Monday night, all seven of the Republicans vying to replace outgoing U.S. Senator Rob Portman met in a testy but civil debate. Central State University hosted the event, which marked the fourth time in a week and a half that the candidates faced off.

With so many meetings in such a short span, the candidates’ positions on a number of major issues are well established. For the most part, Monday saw the candidates reiterating those points rather than adding nuance or covering new ground. But over the course of the 90-minute debate, a few key themes emerged.

Moderator Karen Kasler opened the debate by pressing the candidates to cite “specific verifiable facts” to support their assertions the 2020 election was stolen. Instead, they offered up examples that have been debunked or that have only tenuous connection to the election. Kasler stepped in, to fact check their false statements, and by the second time, her intervention was met with a chorus of boos.

“Can we just stipulate that what I’m going to say it’s not going to be fact-checked by you?” Mark Pukita asked at the beginning of his response.

He went on to argue the whistleblowers who brought to light Trump’s attempt to extort Ukraine were lying, and he drew some sort of connection with Hunter Biden’s laptop. Speaking after the event to the reporters he insisted media fact-checking is unfair to conservatives.

“Everybody knows that you guys are like in the tank for this kind of stuff,” he said.

Vance pushed back on fact-checking and brought up conspiracy theories about Mark Zuckerberg “buying” election boards, the Pennsylvania Supreme Court finding fault in its own election, and Hunter Biden’s laptop. All start with a kernel of truth but wind up in dubious places.

Mandel pointedly attacked the “liberal media” in a question about whether he’d support Mitch McConnell for Senate leader.

In closing statements Mandel and Vance both highlighted the questions they weren’t asked as indicative of media bias. Mandel brought up abortion and gun policy, while Vance referenced big tech censorship.

The fight over endorsements

Throughout the race, former President Donald Trump’s potential endorsement has loomed as a game changing possibility. But to this point, Trump has only voiced opposition to state Sen. Matt Dolan, R-Chagrin Falls, over the Cleveland Guardians name change.

Dolan kept it breezy, though, casually suggesting maybe Trump will come around when he sees his record. But Dolan argued he’s focused on voters rather than endorsers, and Trump’s influence is distorting the race.

“There are people up on the stage who are literally fighting for one vote, and that person doesn’t even vote in Ohio,” Dolan argued. “And that concern for that one vote doesn’t end on Election Day. My responsibility is to be the senator from Ohio, for Ohio.”

Vance meanwhile decried the “guilt by association” of questioning his endorsement by Marjorie Taylor Greene. He argued she shouldn’t be criticized for appearing at a white nationalist rally, because he found nothing to fault in her remarks.

“There’s no business in the world that asks you to stab your friends in the back like politics. I absolutely refuse to do it to Marjorie Taylor Green,” Vance said. “She is my friend and she did nothing wrong. She said nothing wrong, and I’m absolutely not gonna throw her under the bus.”

Neil Patel trumped them all, claiming he was the only candidate endorsed by “almighty God.”

In the end though, Monday’s debate reiterated much of what the candidates have said throughout this race and numerous times in the past few days.

Jane Timken weaved tag lines like “mom on a mission” into her answers and on a question about Corey Lewandowski essentially tucked his name into a recitation of her stump speech.

“There’s lots of show horses, I’m the workhorse,” she said. “And Corey Lewandowski knows that I’ve been in the trenches fighting for the America first policies, defending President Trump and his agenda because they were working for Ohio families.”

But the candidates are clearly honing in on a particular message. Mandel made waves when he claimed in a debate with Morgan Harper that there is no separation between church and state. Now, he focuses on “Judeo-Christian values.”

“Rather than watering down on that Judeo-Christian bedrock, we should be doubling down,” Mandel argued. “We should be instilling faith in the classroom, in the workplace, and everywhere in society.”

The political position hasn’t changed, but the packaging has. Vance has made a similar shift when it comes to Ukraine, staking out a maximalist position early and then attempting to slowly sand off the edges.