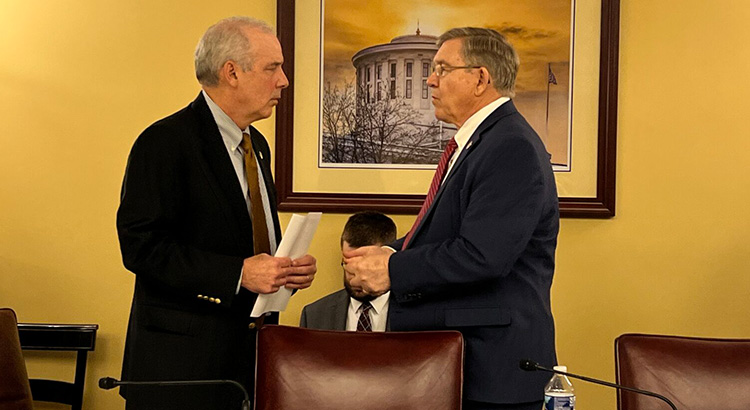 The debate over a court’s role in changing the primary date continues in responses submitted to the Ohio Supreme Court.

Senate President Matt Huffman and House Speaker Bob Cupp flatly rejected the idea of a primary date change by the supreme court, and advised the court to “deny this baseless motion.”

The motion came from House Minority Leader Allison Russo and state Sen. Vernon Sykes, who tucked the request to change the primary date to June 28 into lawsuits against legislative redistricting in the state.

Russo and Sykes asked the court to move the primary date to allow the Ohio Redistricting Commission to conduct their work on the fourth attempt at Statehouse district maps without impeding the election process.

But Huffman and Cupp said the Democrats request would require the court to violate the Ohio Revised Code and “separation of powers principles inherent” in the constitution.

“The Court already recognized that it is the general assembly, not this court, which has the exclusive authority to set the election date and related deadlines,” the two wrote in court documents.

A federal elections clause does dictate that legislatures determine the “time, place and manner” of elections across the country, but Russo and Sykes argued the court had authority in this specific case because of the impact redistricting is having directly on the primary, currently scheduled for May 3.

The Secretary of State’s Office has already said legislative races won’t make it on the ballots for the May primary because of the supreme court’s decision on the third version of Statehouse maps. Those, Secretary Frank LaRose has said and directed county boards of elections, will have to be conducted at a later date.

But in response to Russo and Sykes request of the court, LaRose called the move “a thinly-veiled attempt to circumvent the power of the General Assembly.”

“Any ‘inherent powers’ that this Court might possess in equity does not rise high enough to overcome its clear lack of constitutional authority and the statutory prohibition against moving the primary election date,” LaRose’s attorneys wrote to the court.

Attorneys for Huffman and Cupp accused the Dems of doing “nothing but waste this court’s time relitigating issues … that the court has consistently declined to entertain.”

The GOP legislative leaders said comparing Ohio to other states in terms of litigation done during redistricting isn’t fair, because the timelines were much less short in states like North Carolina and Maryland, and with the 2022 election cycle underway, “it is simply too late (to) seek this relief.”

“No one is usurping the power of the Court here,” Huffman and Cupp stated.

Because the power lies in the legislative realm, LaRose shot the responsibility back at Sykes and Russo, saying they could seek a legislative fix from their colleagues.

“They apparently cannot muster enough support for legislation to move the primary election date so they’ve come here asking this court, improperly, to do it,” LaRose said.

That motion was quickly tabled along party lines.

In January, state Reps. Lisa Sobecki, D-Toledo, and Thomas West, D-Canton, introduced House Bill 544, to move the primary to June 7. The bill was referred to the House Government Oversight Committee in February, but has yet to receive a hearing.

Because it was just introduced, the bill has not been assigned to a committee.

A three-judge panel in a federal court will address a lawsuit by GOP voters asking for the previously struck down maps to be used in the May 3 primary while the commission determines the next set of maps. A conference hearing is scheduled in U.S. District Court on Friday to discuss whether the case will proceed.

LaRose pointed directly to the case in denying the need for the court to change primary dates, even saying Sykes and Russo are attempting “to achieve an alleged strategic advantage in the Gonidakis federal case.”

“The commission is and will continue to work towards that goal through at least March 28, 2022,” LaRose wrote to the court. “Nothing the (federal court) does will frustrate that.”

The Ohio Redistricting Commission is scheduled to meet daily until Monday, the deadline imposed by the supreme court to submit new Statehouse legislative maps.