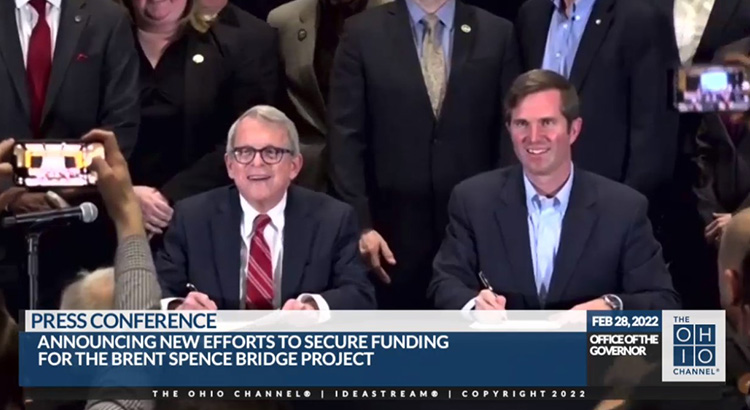 Gov. Mike DeWine is teaming up with Kentucky Governor Andy Beshear for a joint effort to improve the Brent Spence Bridge. The agreement signed Monday in Covington, KY is the first step in the process of securing funding from the bipartisan infrastructure bill approved last year.

“The Brent Spence Bridge is a stout and sturdy structure that’s going to be carrying traffic over the Ohio River for many years to come. But it is crying out for help,” Kentucky transportation cabinet secretary Jim Gray explained.

But the states’ plan doesn’t stop at improving the existing structure, they want to build a companion bridge to ease traffic at the vital crossing as well. DeWine put the price tag at roughly $2.8 billion to renovate the existing structure and freeway connections as well as erect a new bridge. He and Beshear are seeking a $2 billion federal construction grant with the states splitting the remaining costs.

“It includes at least $39 billion set aside specifically for bridge projects,” DeWine said of the infrastructure legislation. “We believe that there is no bridge in this country that is as necessary, and needing of a change, in needing of building a new bridge through this section. The corridor from Michigan all the way down is vitally important to the future of this country.”

Beshear joked that he was “negative 14 years old” in 1963 when the bridge was built, and that it now sees double the traffic it was intended to carry. The need for improvements came into sharp relief two years ago after a semi-trailer accident forced a six-week closure of the bridge.

Federal authorities haven’t announced the application process for the competitive grant funding Ohio and Kentucky are seeking, but the governors described their agreement as way to improve their chances.

“We’ve put meat on these bones,” Beshear described. “We’ve already come to terms on most of how the bridge will be built. We can tell them that we’ll be ready to go immediately afterwards.”

DeWine noted they aren’t the only ones eager to see results.

“Sometimes bureaucracy slows things down at the federal level, but I also think they have an interest in getting this money out, too,” DeWine said. “I think they want to see that money out quickly.”

Ohio Department of Transportation Secretary Jack Marchbanks put construction time at about five years. While he cautioned there are still “lots of unknowns,” he offered a potential timeline for the project.

“If we do get grant funding by the end of here, our goal is to have a design procurement package on the street by the fall of 2023.”

Governor Beshear, though, was more forceful.