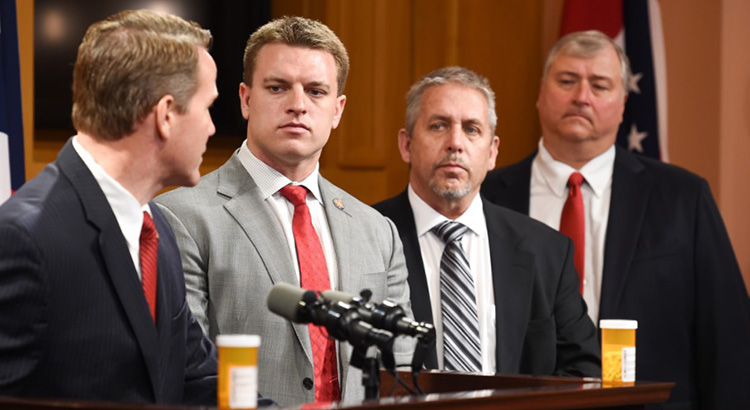 Lawyers with the Ohio House of Representatives denied a public records requests for text messages between a sitting lawmaker and the former House Speaker, who was expelled by his peers while under a racketeering indictment related to alleged public corruption.

However, a lawyer with the Ohio House denied a public records request Tuesday for texts between the two, saying none could be located. Edwards, in an interview late Tuesday, offered a simple explanation.

“You’re going down the rabbit hole saying Jay Edwards deletes texts with Larry Householder. No, that’s not true,” he said. “Jay Edwards deletes all texts. To members, to other people; I go through at night and erase text messages I don’t find useful.”

Householder was arrested in July 2020 and dethroned as speaker shortly thereafter. He has pleaded not guilty and awaits trial, expected this fall. He was expelled from the House in June 2021.

The texts between the two men first came to light when The Columbus Dispatch reported that Householder texted Edwards on Feb. 18 about a data privacy bill Edwards opposed. Edwards’ opposition staved off a vote that day.

The Ohio Capital Journal requested all texts between Edwards and Householder between June 1, 2021 (about the time the House expelled Householder) and Feb. 18, 2022, the date of the request.

Governments can destroy certain records, but “only if they are destroyed in compliance with a properly approved records retention schedule,” according to guidance from the attorney general.

Ohio public records law allows anyone to request and receive copies of documents from government agencies and government officials.

Josh Sabo, a House attorney and policy advisor to the current house speaker, said after a search that “we determined that we have no records responsive to your request.”

In his email, he cited House policy that allows lawmakers to destroy “transient records,” which includes documents “that serve to convey information of temporary importance; documents in lieu of oral communication, such as telephone messages, post-it notes, text messages, voicemail, and fax transmittal cover sheets; and drafts.”

He didn’t respond to follow-up questions, including whether this means Edwards has been destroying texts with Householder. The House cited the “transient” records policy in denying a request for text messages from Householder referenced in a criminal complaint against him.

Edwards said he’d hand over the text if he still had it. He said he and Householder are old friends. Their texts, he claimed, center more around Perry County, Southeast Ohio, Hocking College and life in general than statehouse issues.

“Quite frankly, I go through my phone and erase a lot of text messages, and if it’s anything that I feel like is a public record, and that is the case, then I wouldn’t have erased it,” he said.

Edwards previously served as a member of House leadership when Householder presided as the speaker. Neil Clark, a lobbyist who was arrested alongside Householder, told Cleveland.com that Edwards is “Representative 8” in the Householder complaint.

Edwards voted for House Bill 6 — the legislation at the center of the prosecution against Householder — and was one of 22 House lawmakers to vote against expelling Householder.