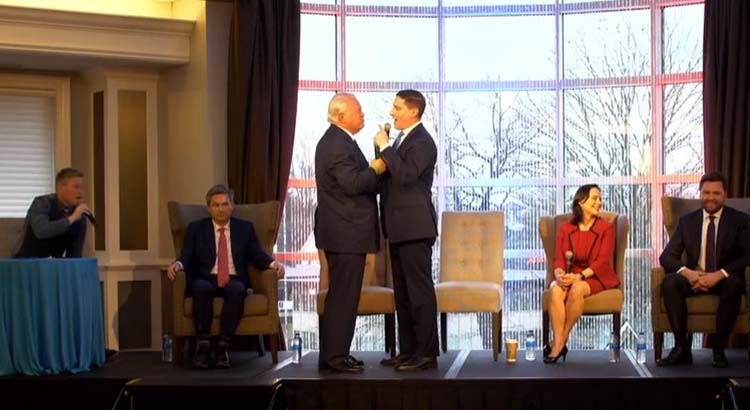 Embarrassing doesn’t cover it. Offensive is better. The sad sacks duking it out (almost) to grab the crown in the Republican primary for Ohio’s open U.S. Senate seat have managed to insult just about every rational-thinking voter in the state. Good job, candidates, you’ve turned the GOP side of this race into a cheap side show instead of a serious conversation about what matters to the people you’re ostensibly running to serve.

What matters to Ohioans is having enough money to make it through the month. Jobs that pay livable wages instead of minimum scratch with zero benefits. Help with sticker shock medical costs that keep us up nights. Adequate funding for our perpetually cash poor public schools that educate most of our kids. Sensible safety policy we can all live with to counter epic gun violence. A commitment to  Social Security and Medicare and their over two million beneficiaries in Ohio.

But the table talk issues that animate us are not what energize the Republican slate of Senate hopefuls in Ohio. No, these candidates are laser focused on whatever “culture war” Fox News is playing on a loop 24/7 — regardless of its irrelevance to ordinary Ohioans. C’mon. Parents aren’t up in arms over their “rights” being attacked in their neighborhood schools. What’s happening or not happening on the southern border isn’t a burning concern on Main Street. COVID-19 restrictions are history and empty rhetoric about a rigged election is old.

Yet instead of taking the pulse of what Ohioans want in their next U.S. Senator, GOP campaigners are taking their cue from Tucker Carlson and other right-wing carnival barkers. So, they prattle on and on about Fox News-generated “controversies” and feed conspiracy theories to the MAGA faithful that are full of holes. Matt Dolan, the so-called “moderate” in the race, railed against public schools indoctrinating students with critical race theory. (They’re not, and he knows it.)

Weathervane Jane Timpken, who defended Ohio Congressman Anthony Gonzales after his Jan. 6 impeachment vote then threw him under the bus when she became a candidate, sought  MAGA love by attacking Anthony Fauci (for devoting his life to science and saving lives). J.D. Vance — a case in politically expedient reinvention if there ever was one — claimed massive voter fraud without a shred of evidence and, for good measure, dissed Ohio’s large Ukrainian community with galling indifference.

Transparently hollow Josh Mandel shamelessly prostrates himself before the thug of Mar-a-Largo with repeated falsehoods of a stolen election. Ditto Big Bucks Mike Gibbons, who promised to fully investigate the rampant (or nonexistent) cheating in 2020 that two years of nonstop scrutiny somehow missed. This is the best the Ohio Republican Party can offer statewide voters in senatorial material? A race to the bottom with straw men willing to say anything for a rise?

It’s bad enough that the bunch of Senate aspirants parroting Fox blather have left the mainstream in the dust. (I sympathize with principled Republicans whose morally bankrupt party has morphed into a white grievance-fueling, disgraced president-worshiping, hostile shell of its former self.) But when the power-hungry phonies get crossed wired in warring over the lowest common denominator, expect the worst.

Like two grown men chest-bumping at a forum for Ohio Republican Senate rivals. An adolescent dance between two forgettable clowns — a rich, self-important investor bankrolling his ambitions and a puffed up Pee-wee Herman itching for a fight. Yes sir, that’s what Ohioans are looking for in a U.S. Senator — knee-jerk macho idiocy. I’d say the Ohio GOP Senate campaign reached a nadir with the cringe-worthy face-off between Mike Gibbons and Josh Mandel, but we’ve still got a few weeks to go (maybe more?) to the primary.

The viral clip of the snarling pair would be funny if the position of U.S. Senator wasn’t so consequential to Ohio and the country. The weighty office in the upper chamber of Congress is not a prize for the winner of the most clueless, (Gibbons on non-oppressed women) juvenile, incendiary, deceitful, Trumpiest performer in a three-ring circus. Being elected to the U.S. Senate to represent all Ohioans from MAGA cultists to Bernie Sanders believers, is a privilege that should be earned on the merits of record, reputation and demonstrated resolve to deliver meaningful pragmatic change back home.

Strength of character should also be a job requirement. Unfortunately for us, that qualification is not a deal-breaker for high office. Ohio Sen. Rob Portman leaves office as a coward who preferred silence to spine. He kept his mouth shut when his voice could have spoken truth. His muted response to the deceit and impeachable conduct of a corrupt leader who tried to extort Ukraine for political dirt, overthrow his own government and who continues to lie about a rigged election, speaks volumes about Portman’s backbone.

Can we expect better from an offensive clown show with arrested development?