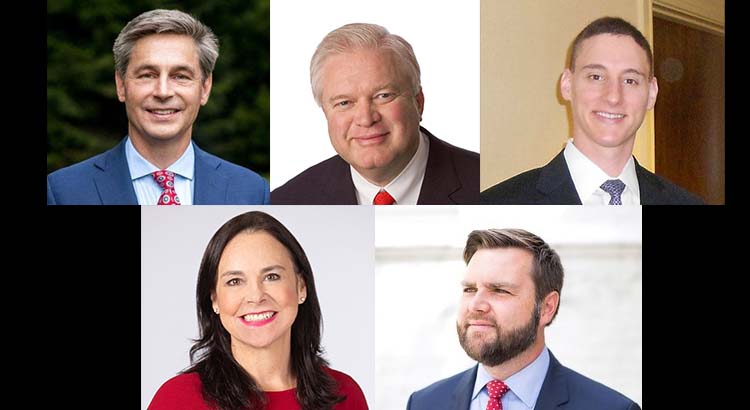 Still the confrontation between former state treasurer Josh Mandel and investment banker Mike Gibbons hung over the evening. The moderators opened by asking both to address the incident. Mandel insisted he’s a fighter. Gibbons, meanwhile, insisted his point about Mandel’s lack of private sector experience wasn’t meant to denigrate his military service.

Throughout the night other candidates called back on the incident to distinguish themselves. J.D. Vance again criticized Mandel for using his time in the Marines as a “political football.” Former GOP chair Timken called it an embarrassment.

“If I had been their mother, I would have grounded them,” she said.

Otherwise, though, moderators Colleen Marshall of NBC4 and Joe Toohey of FOX 8 moved through topics briskly, covering subjects like the war in Ukraine, the cost of gas, and fealty to former president Donald Trump. They also mixed in questions directed at specific candidates to press them on past statement or positions.

In the broader questions directed to the field, a kind of round robin emerged with different candidates separating themselves from a pack that largely agreed on the issue. State Sen. Matt Dolan, for instance, was the sole candidate to raise his hand indicating it’s time for former president Trump to move on from the 2020 election.

“Elections are a state issue,” he explained. “In Ohio, we have very secure elections. There have been two audits done and it has shown there are no problems. As a Republican, we’ve got to take on the Biden administration.”

Dolan sounded every bit the Ohio Senate finance chair throughout the night, comfortable with details and technical distinctions. He emphasized that Senate record to argue he’s actually put Trump’s rhetoric into policy in Ohio. Still, as the only candidate Trump has explicitly refused to endorse, he faces an uphill climb.

Gibbons was asked to respond to previous statements that Timken “barely worked” before entering politics and that women had never been oppressed. He allowed only that women faced oppression, “when they weren’t allowed to vote, probably,” before arguing it was a different culture. He said there weren’t many women in combat during the World Wars.

“That was men’s jobs at the time, women were not subjected to that, so were men oppressed because they had to go to war?” he said. “I don’t know if oppressed is the right word. It was a different world that’s all.”

Timken seized on his comments, saying it showed his arrogance, and she criticized he and Mandel’s “bloviating” and “bravado” during Friday’s forum. Gibbons pushed back.

“What would Jane have done if Josh Mandel had attacked him on the stage?” he said.

“You mean her on the stage?” Timken responded.

Vance set himself apart on the issue of Ukraine by continuing to insist on a more isolationist posture. While others on stage voiced support for sending weapons, fighter jets and even a no-fly zone — so long as the Europeans did it, Vance argued the U.S. has more pressing issues.

“I’m in the minority up here,” he acknowledged, “because at the end of the day, we can accept as individuals, look, it’s tragic. It’s terrible. What Vladimir Putin did was wrong, invading a sovereign country on his border, but we have our own problems in the United States to focus on.”

Dolan argued Vance should apologize to the state’s Ukrainian population, but Vance rebuffed him.

“I never said I don’t care about the people of Ukraine. I said the matter of what happens to Ukraine is not in our vital national interest,” Vance argued. “It’s statesmanship to separate your emotions as a personal matter from what we should do as public policy. That’s all it is.”