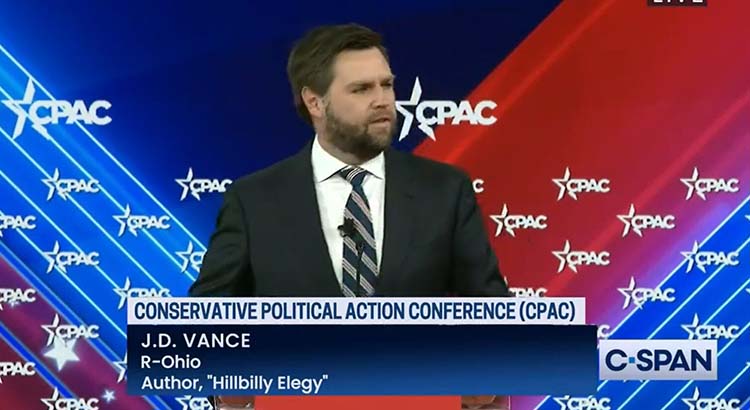 Mandel spoke Friday, trotting out some of the same talking points he’s been workshopping in a pair of wildcat debates with Democrat Morgan Harper. The primary difference was the response.

“I’m the only candidate in Ohio who’s willing to say this,” he said, lip curled. “Every time I say it, the liberal media gets up in arms, and the squishy RINO Republicans get up in arms, but I want to say it very clearly and very directly: I believe this election was stolen from Donald J. Trump.”

The audience loved it. They loved it, too, when he called Reps. Liz Cheney, R-WY, and Adam Kinzinger, R-IL, traitors because they agreed to serve on the committee investigating Jan. 6.

“We should abolish the Jan. 6 Commission, and replace it with a Nov. 3 Commission,” Mandel said.

Mandel asserted without a shred of evidence that Trump won Ohio by even more than the eight-point margin he got in 2020. To address this imagined election fraud, Mandel proposed a draconian set of changes to American elections, including an end to early voting, most mail-in voting, and the use of voting machines of any kind. He also called for a photo ID requirement before casting a ballot.

J.D. Vance was one of a handful of speakers addressing the theme “Why the working class hates the Democrats.” Vance’s answer? The southern border.

Vance’s remarks came a few hours before Donald Trump’s speech on Saturday, and he offered a foreign policy vision that carried the former president’s “America First” rhetoric to it’s logical, and unsettling conclusion. While most speakers at CPAC studiously avoided the ongoing war in Ukraine, Vance doubled down on his isolationist contention that the conflict has nothing to do with American foreign policy.

“Ladies and gentlemen, it’s just time to stop. I’m sick of it,” Vance said. “I’m sick of being told that we have to care more about people 6,000 miles away than we do people like my mom and my grandparents and all the kids who are affected by this crisis.”

The crisis to which he’s referring is the flow of illicit drugs like fentanyl coming across the U.S./Mexico border. He explained the drug crisis hits close to home, describing how his mother nearly died from an overdose seven years ago, and how his family recently celebrated her seventh year sober.

But his proposals in response to an admittedly dire challenge land in some eye-opening places.

“The very first thing is that we should declare the Mexican cartels a terrorist organization,” Vance argued. “Don’t send the military to Ukraine, send it in Mexico and let’s fight back against this poison.”

After invading its neighbor militarily, Vance argued the U.S. should “stop giving welfare” to non-citizens. While refugees and asylees are currently eligible for benefits, undocumented residents are not. Vance also floated “de-funding” so-called sanctuary cities.

Rep. Jim Jordan shared the stage with CPAC organizer Matt Schlapp to talk about the future of the conservative movement. Notably, Jordan’s message for this year’s midterm election was far more tempered than the pep rally boosterism offered by some other speakers.

“You know we never want to get overconfident,” Jordan said. “We got almost eight months until the election, so we got to campaign hard, but always be confident — never be overconfident. That’s where I think we need to be.”

And after years of the GOP operating more as a check on legislative action, he argued for a more pro-active approach if Republicans take control of Congress in the midterms. Jordan’s agenda would plant rhetorical flags in debates that fire up the GOP base and feed its more conspiratorial wing. In addition to harsher immigration policy and fighting so-called big tech censorship, Jordan would ban “gain of function” research — a reference to the theory that COVID-19 was developed in, and leaked from, a Chinese laboratory.

“But remember, Joe Biden will still be president,” Jordan warned. “So those pieces of legislation aren’t going to become law, but we should pass them anyway. Show the country what we’re for and begin to frame up the 2024 race when I believe President Trump is going to run again.”

In its annual straw poll, CPAC asked attendees who they thought should lead the party in the 2024 presidential contest. Trump won handily. But his 59% support was more then ten points shy of their last survey.