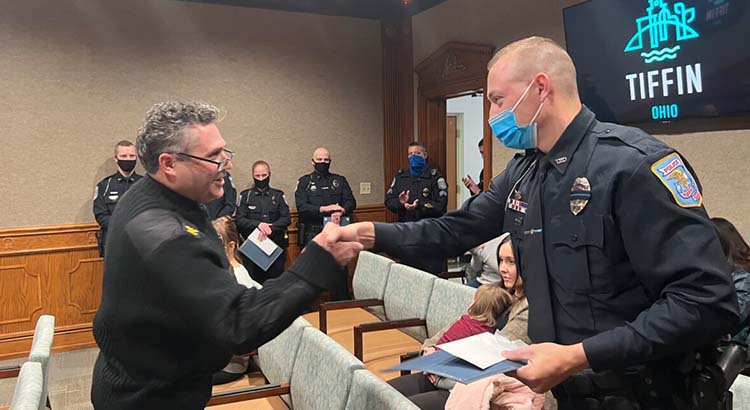 On Dec. 19, 2021, officers were dispatched for a suicidal subject that had taken a bottle of pills. Stevens located the individual standing on a bridge and attempting suicide. Despite officers attempts to de-escalate the situation, the subject jumped off the bridge and into the water.

Officers sprang into action, running alongside the banks, attempting to snag the subject, who at this time was being pulled by the current with only his head above the water. Officers Illig and Miller jumped into the water, not knowing if he still was holding a weapon, corralled the subject and navigated toward the shore.

Officers Perry and Stevens, along with Tiffin EMS, assisted in pulling him out and rendering first aid. The subject was then transported to Mercy Health – Tiffin Hospital. 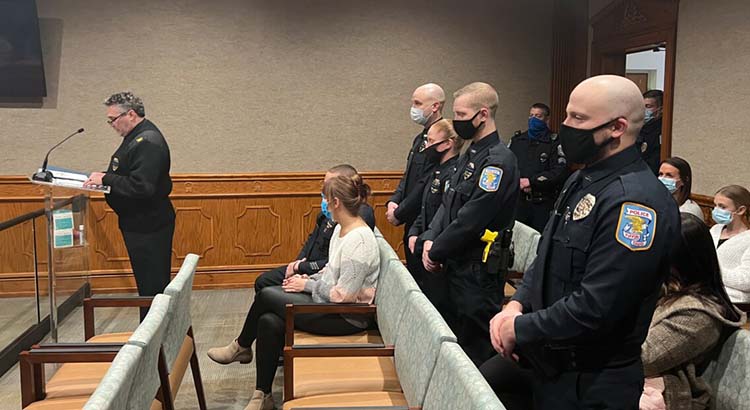 On Dec. 27, 2021, while on patrol, Officer Nowak observed a vehicle traveling southbound on North Washington Street and recognized a passenger in the vehicle as a known subject with an active arrest warrant.

Officer Nowak confirmed the warrant with dispatch and initiated a traffic stop. Upon approaching the vehicle, Officer Nowak observed a black backpack, on the floor, between the legs of the subject with a warrant.

The subject was arrested and removed from the vehicle, read his Miranda rights and subsequently confessed to having contraband, including narcotics and two weapons, which were seized during the arrest.

Chief David Pauly said, “Every day, the members of the Tiffin Police Department assume risk on behalf of the community. Some days are uneventful. Other days are full of danger. And on some days, their dedication to this work of public service leads them to perform exceptional acts of heroism, service, and guardianship. The Tiffin Police Department is proud to have officers of their caliber who go above and beyond the call of duty to serve the residents of this city.”

Tiffin Mayor Aaron Montz commented: “Congratulations to Officers Perry, Stevens, Illig, Miller and Nowak on their recognition and my deepest thanks for their service to the citizens of the City of Tiffin.”