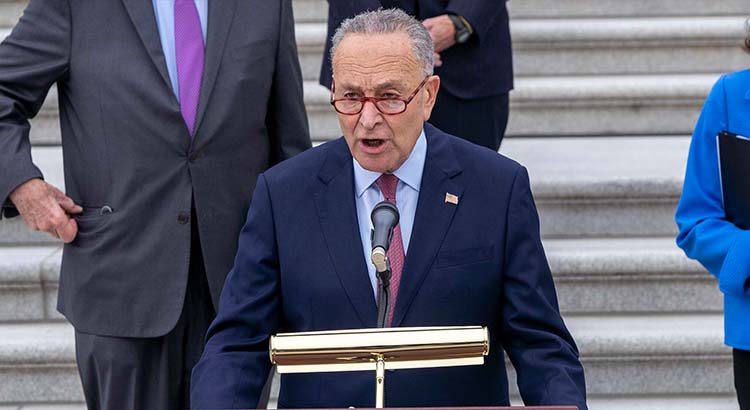 Senate Majority Leader Chuck Schumer said that the Senate will act as soon as Wednesday to attempt to again pass voting rights legislation.

“Failure is not an option for the democracy of America,” the New York Democrat said at a Tuesday press conference with other Senate Democrats. “We’re running out of time.”

Schumer has repeatedly vowed in recent days to pass voting rights legislation, and if it is blocked by Republicans as expected, to consider a change in the Senate’s current filibuster rules. The evenly divided Senate requires 60 votes for legislation to advance, and Democrats have talked about a carve-out for voting rights, a talking filibuster or some other kind of revision short of entirely killing the filibuster.

Iowa Republican Sen. Joni Ernst held up a pair of flip-flops at the press conference to illustrate her argument that Democrats have changed their opinions on the filibuster and made a “filibuster flip-flop.”

The White House on Tuesday made a push in concert with Schumer. President Joe Biden went to Atlanta and gave a speech endorsing a change in Senate rules.

“Will we choose democracy over autocracy, light over shadow, justice over injustice?” Biden said. “I know where I stand. I will not yield. I will not flinch. I will defend your right to vote and our democracy against all enemies foreign and domestic. And so the question is where will the institution of United States Senate stand?”

Schumer said the Senate will vote at the latest by Martin Luther King Jr. Day, which is Monday.

“Our experts have told us moving by mid-January is the latest we can go,” he said.

The intensified drive for voting rights legislation comes after Republican controlled state legislatures have passed strict voting requirements that advocates and researchers say will make it harder for rural Americans, people of color and people with disabilities to vote.

The Brennan Center for Justice at the New York University School of Law found that from Jan. 1 to Dec. 7 of 2021, at least 19 states passed 34 laws restricting voting access.

Joining Schumer at Tuesday’s press event were Democratic Sens. Tim Kaine of Virginia, Jon Tester of Montana and Debbie Stabenow of Michigan, as well as Independent Angus King of Maine.

“Republicans in my state are trying to change the system to make it harder to vote,” she said.

Tester has backed a so-called talking filibuster that would require senators to remain on the floor if they block legislation.

“I think it’s good for bipartisanship,” Tester said about amending the filibuster in that way. “I think this is fair.”

How the Senate moves ahead on voting rights is unclear. Schumer needs all Democrats on board to change the filibuster, and two key Democratic votes — Sens.  Joe Manchin III of West Virginia and Kyrsten Sinema of Arizona — are not guaranteed though Sinema has stressed she backs voting rights measures. Both senators are hesitant to make any changes to the filibuster.

Schumer said the two pieces of legislation Democrats will try to pass are the John Lewis Voting Rights Advancement Act and the Freedom to Vote Act.

The John Lewis bill, named in honor of the Georgia lawmaker and civil rights icon, would bolster the Voting Rights Act by establishing a new formula to require all 50 states to get special permission from the Justice Department before making any changes to voting laws or putting in place new voting requirements. One Republican, Sen. Lisa Murkowski of Alaska, has said she would support Democrats in passing the John Lewis Act.

The Freedom to Vote Act is a compromise brokered by Senate Rules Committee Chairwoman Amy Klobuchar of Minnesota and Manchin. The bill would establish Election Day as a national holiday and set minimum standards that each state must have for elections, such as two weeks of early voting and an option for same-day voter registration.

Ernst also took to the Senate floor Tuesday to speak in opposition to any changes in the filibuster, accusing Democrats of trying to take over state elections.

She said that in her home state there has been record voter turnout.

“My friends on the other side of the aisle would have you believe that voters are being suppressed in red states all over this country,” she said. “Iowa’s election laws are much more progressive than Delaware and New York.”