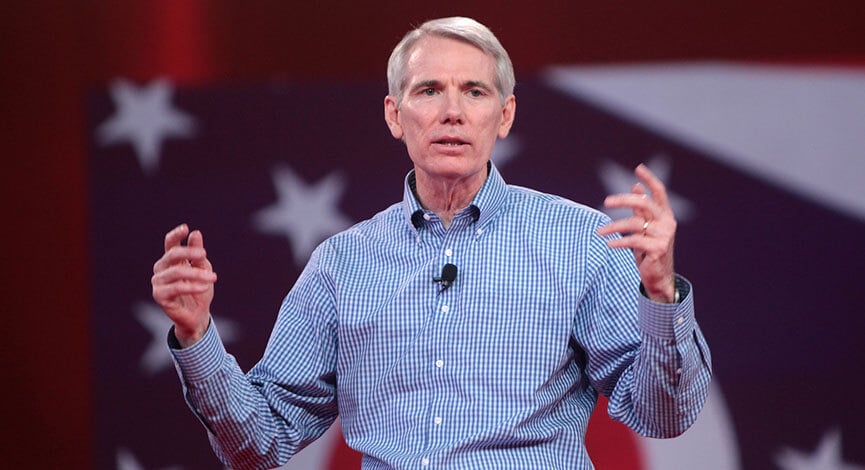 “History will have to record that the greatest tragedy of this period of social transition was not the strident clamor of the bad people, but the appalling silence of the good people.” – Martin Luther King Jr.

History could record U.S. Sen. Rob Portman as a pivotal player who stepped up when American democracy teetered on extinction. When time was of the essence to stop a slow-moving coup dead set on nullifying nearly 250 years of representative government, history could note that the Cincinnati Republican broke with his party to cast a critical vote for we the people. Portman could be memorialized for girding a democratic process in urgent need of repair.

A year has passed since insurrectionists made a trial run at violently overthrowing our government. The defeated ex-president and his dangerous apparatchiks are unbowed and determined to try again. Last year, they laid the groundwork for seizing power from the people in 2022 and 2024 by enacting sweeping voter suppression and election subversion laws in states nationwide. They manipulated state district lines for severe partisan advantage, or gerrymandering, to marginalize voters and ensure preordained election outcomes.

Emboldened anti-democratic forces will not stop unless there are immediate guardrails erected to validate voting rights for every American and to protect the integrity of elections and election officials from partisan interference. Look at how far states like Texas, George, Florida, Arizona and scores of others have already gone to make voting harder and empower partisan legislators to replace impartial election administrators or take over the vote counting process. Look at how Ohio partisans utterly defied the state constitution and the clear intent of more than 70% of Ohioans who demanded fair districts.

Portman could be the siren of change for millions of disenfranchised Ohio voters who are again drawn into districts designed to dilute their influence and render their vote meaningless. His own hometown is Exhibit A. Black voters, who make up almost half the population in Cincy, are powerless to choose a representative who shares their values in Congress. A rigged district map guarantees the job to Rep. Steve Chabot — a white Republican who voted to overturn the 2020 election results — by combining the downtown area with a distant, overwhelmingly white conservative county that went for the MAGA Miscreant by 20 points.

Ohio’s junior senator could block another decade of skewed districts that make a mockery of representational equality. He could reaffirm the one person, one vote principle, fortified in the Freedom to Vote Act, that upholds every citizen’s right to exert equal influence on who represents them regardless of constituency. The landmark legislation, which the Senate is expected to vote on before Martin Luther King’s Day, would neutralize partisan and racial gerrymandering in federal elections by setting national standards to establish fair representation, strengthen other protections for communities of color and make it easier for voters to get bad maps (like the gerrymandered monstrosities in Ohio) struck down in court.

The voting rights bill also sets new standards to secure uniform access to the ballot box, for early and mail voting, to modernize voter registration, prevent voters from being wrongly removed from voter rolls — Ohio nearly purged 10,000 voters who ended up voting in the 2020 election — to reinforce voting security and adopt voter-verifiable paper ballots, to restore the right to vote for formerly incarcerated Americans, to increase transparency in political campaign spending and disclose the shadowy megadonors swaying elections.

See anything so far that is “radically undemocratic” or that runs “so counter” to Portman’s embrace of state-level “commonsense efforts to increase voter confidence in elections”?

Nothing in the Freedom to Vote Act conflicts with existing voting rights provisions under federal law or limits the ability of states to provide greater protections for voters than those covered in the bill. Contrary to the repeated Republican refrain, this voting rights legislation is not a huge federal power grab. No. This pro-democracy measure — to preserve what generations of Americans have fought and died for — is Congress’ constitutional imperative (see the Elections Clause of Article I, Section 4 of the Constitution) especially in the wake of Jan. 6.

Pro-autocracy politicians wielding absolute power in states are “threatening to collapse the foundations of our security and democracy with breathtaking speed,” warned former president Jimmy Carter. America is in grave peril of losing what it worked so hard to achieve globally — “the right to free and fair elections, unhindered by strongman politicians who seek nothing more than to grow their own power.”

But Portman believes the federal government “should only get involved [in federal elections] in very extraordinary situations.” This ominous trajectory to fascism qualifies, senator. Between Jan. 1 and Dec. 7, 2021, at least 19 states passed 34 restrictive voting laws, according to the nonpartisan Brennan Center, that “make it more difficult for voters to cast mail ballots that count, make in-person voting more difficult by reducing polling hours and locations, increase voter purges and criminalize the lawful behavior of elections officials.” And “the tidal way of restrictive voting legislation will continue in 2022.”

Meanwhile, the MAGA Party is aggressively whitewashing the attack against America as no big deal and portraying domestic terrorists as patriots. That, Sen. Portman, is Orwellian horror writ large. You, sir, could mark this defining moment in our history as a statesman who recognizes the enormous stakes of appalling silence in the face of strident authoritarianism. You have nothing to lose but your legacy.