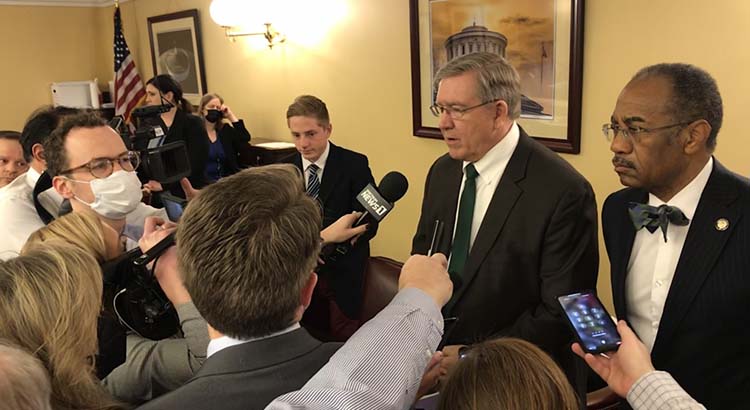 The Ohio Redistricting Commission began anew on Tuesday, though the details of their newest legislative mapping process are still up in the air.

In its Tuesday meeting of the ORC, commission co-chairs House Speaker Bob Cupp and state Sen. Vernon Sykes said work to correct problems identified by the Ohio Supreme Court with legislative district maps has already begun between the Democratic and Republican caucuses.

The commission is working on a deadline of Saturday, which is 10 days from the date the supreme court made their decision. Cupp said the commission is keeping in mind meeting the deadline so that the maps can be considered for any objections, which have to be submitted within three days of map approval.

“This is a very time-sensitive matter, and we’re well aware of that,” Cupp said.

Secretary of State (and ORC member) Frank LaRose said more than one deadline needs to be met in the process.

“The General Assembly has ordered me to conduct an election on May 3, and I am committed to making sure that that happens,” LaRose told the commission. “But without finality on maps, that starts to become mechanically impossible very soon.”

Some deadlines are already doomed because of how much time the redistricting process has taken, LaRose said. This weekend is the deadline for the state to submit the Federal Write-In Absentee Ballot forms for the next election.

Because of the timeline, LaRose said he’s asked the legislature for temporary authority to adjust the administrative deadlines between the candidate filing deadline at the beginning of February and the May primary.

However, Cupp said he doesn’t sense “any appetite to change either the filing deadline or the primary election,” even if administrative deadlines change.

The commission has about a week to come up with new maps that follow all constitutional regulations for redistricting, and aim for a 54% Republican/46% Democratic balance in the state aligned with statewide voter preferences. Sykes said the commission has agreed and shared data to be used in the mapmaking process, which will be the 2016 to 2020 statewide election data.

Cupp said the commission is committed to working toward that 54-46 ratio.

“(The supreme court has) determined that that needs to be closely followed,” Cupp said.

Last week, in a 4-3 decision, the state’s highest court rejected maps approved by the commission in September 2021. Justices in the majority vote said the commission did not even attempt to meet constitutional standards to create a map that doesn’t favor or disfavor one political party over another, or use the proper data to calculate the statewide voter preferences.

The court found that Cupp and Senate President Matt Huffman were the only two commission members “involved when the plan that was ultimately adopted was drawn,” and the principal mapmakers were not asked to comply with Section 6 of the constitution, which prohibits partisanship.

At the Tuesday meeting, Gov. Mike DeWine – father of Supreme Court Justice Patrick DeWine and dissenter in the redistricting ruling – took time to read over the court’s decision on legislative redistricting and level-set the commission on the task at hand. He said the commission should “take affirmative steps” to comply with the constitutional standards, and make certain everyone from commission members to staffers know they need to comply.

“So, anybody who is drawing a map, anybody who works with any members of this commission should be instructed by the individual commission members to do that,” DeWine said.

The newest member of the commission, newly minted Democratic Ohio House leader state Rep. Allison Russo, D-Upper Arlington, was sworn in to fill the position left vacant by former House Minority Leader Emilia Sykes. She said the commission should take its second chance at the maps “to do what is right by Ohioans and deliver bipartisan 10-year maps.”

“We should start with the assumption that it is absolutely possible, and move forward,” Russo said after the meeting.

Russo told commission members during the meeting and the press afterward that she is pushing for public meetings to be scheduled quickly before the ORC loses the opportunity.

The commission did not set up any future meetings or give any indication of how the map-making process is going during Tuesday’s meeting. Cupp said he and Sykes will be meeting to discuss a schedule for future meetings “as business would warrant us to.”

“Obviously this is a little uncertain process, it’s new,” Cupp said. “We’re kind of feeling our way as we go.”

Anti-gerrymandering advocates attended the meeting and said they were encouraged to hear the court’s expectations playing into the first meeting, but saw a lack of public input as the process started.

“It would be better to have an understanding of what maps they’re starting with, when hearings will be, how the public can participate, and so it’s my hope that even within the next 24 hours we get a lot more information,” said Jen Miller, executive director of the League of Women Voters of Ohio.