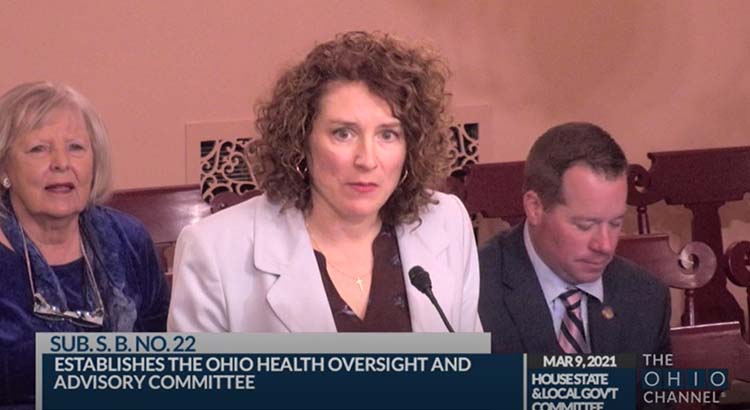 Dr. Elizabeth Laffay testifies before the House State and Local Government Committee on March 9, 2021. She spoke in support of a bill limiting the health department’s ability to respond to COVID-19, declaring the “medical pandemic is now over.” Source: Ohio Channel.
ShareTweet

For most of the pandemic, Dr. Elizabeth Laffay, a licensed doctor of osteopathic medicine, worked from the outside in.

She told state lawmakers that vaccines kill; she touted dubious COVID-19 treatments like ivermectin and hydroxychloroquine on talk radio; she stormed a Big Lots with a small and barefaced crowd to protest its mask requirement; and she pushed her local school board to rescind its mask requirement.

However, in November, with a $1000 financial boost from U.S. Senate candidate Jane Timken’s “Jobs For a New Economy” (JANE) PAC, Laffay won a seat on the Huron City School District Board of Education.

Laffay’s election epitomizes a confluence of trends as the new coronavirus approaches its third year on earth: the explosion of anti-science and anti-vaccination fervor; conservatives’ new emphasis on school board races as masks and “critical race theory” animate their political base; and doctors using their credentials to spread health misinformation in the face of medical licensing boards that have refused to intercede.

“We have been largely kept from seeing the consequences that these injections have been clearly though quietly associated with, including neurologic damage, convulsions, illness, death, continued spread and continued contraction of the disease,” Laffay said to lawmakers this spring, testifying in support of legislation to ban any (not just COVID-19) vaccine mandates.

Real world data has demonstrated COVID-19 vaccines to be enormously effective in preventing death and hospitalization from the disease. In Ohio, 94% of people who were hospitalized or died from COVID-19 in 2021 were unvaccinated. Meanwhile, studies have not linked vaccination to any increase in mortality.

Ohio, in the midst of a case surge delivering twice the caseload seen in the pre-vaccination winter of 2020, remains the 8th least vaccination-started state in the nation. About 60% of state residents have received at least one dose, compared to about 74% of all Americans.

Besides attacking vaccines, Laffay has regularly downplayed the severity of the infections they prevent. At a March 9 state legislative hearing, Laffay declared that the “medical pandemic is over.”

Since then, 11,181 Ohioans have died from COVID-19, according to data from the Ohio Department of Health. Sixty-five came from Erie County, where Laffay now holds public office.

In an interview with Tom Roten, a conservative talk radio host, she said she has been prescribing ivermectin and hydroxychloroquine — both of which have been championed by conservatives as cures and preventatives for COVID-19 over objections from the medical community and the drug’s manufacturers who have pleaded against the practice — throughout the pandemic. She also recommended using mouthwash to “decrease any viral loads” that might be accumulating.

“If this virus is following the pattern that all viruses follow, maybe we don’t even need a vaccine,” Laffay said at a private event hosted by Ohio Stands Up, which has filed a number of unsuccessful lawsuits challenging COVID-19 response measures.

Her worldview on COVID-19 appears in the minutes of some of the Huron City School Board meetings she attended before winning election. For instance, in November 2020, Laffay said there’s “too much focus on fear and case counts rather than on actual illness numbers” and noted that social distancing is a “suggestion and not a requirement.”

In July 2021, she expressed concerns to the board about how the media is focused on the delta variant, which was the dominant strain of the coronavirus at the time, and said schools should re-open without any mask requirement.

Speaking to Roten, Laffay identified herself as a member of “America’s Frontline Doctors,” a network of health care providers who claim vaccines are unsafe and ineffective who have made millions selling consultations and alternative medications like ivermectin, which many pharmacies have refused to dispense. The network was founded by Dr. Simone Gold, who awaits trial on charges related to her allegedly joining an insurrection at the U.S. Capitol on Jan. 6, 2021.

Medical boards have come under increasing pressure to crack down on physicians they license who spread lies about purported dangers of vaccination, given the overwhelming evidence in support of vaccines and the damage done when enough people come to believe what the so-called “disinformation doctors” say.

Ohio physician Dr. Sherri Tenpenny became a national face of this push in June when she told lawmakers that vaccines “magnetize” recipients and “interface” with cell towers. The Ohio State Medical Board renewed Tenpenny’s license just a few months later.

“During this ongoing public health emergency that has claimed more than 5 million lives globally, a small minority of physicians have exploited the credibility that comes with their medical licenses to disseminate disinformation to the public,” reads a report from the de Beaumont Foundation, which criticized medical boards for failing to rein in the doctors in question. “Their lies, distortions, and baseless conspiracy theories have caused unnecessary suffering and death that are prolonging the pandemic.”

Speaking to Roten, Laffay claimed she had to be careful what she said about vaccines because she got a letter from her medical board warning that she could lose her license if she speaks ill of them on air. (She went on in the interview to cite an erroneous claim from an AFD lawsuit alleging that 45,000 people have died from COVID-19 vaccines.)

State medical board spokeswoman Jerica Stewart declined to answer specifics about Laffay or any correspondence with her. She said the board has not formally disciplined Laffay or any Ohio physicians for spreading misinformation about COVID-19. However, Stewart said the board has the legal power to punish doctors who make “false, fraudulent, deceptive, or misleading statement[s] in relation to the practice of medicine and surgery.”

Laffay’s questionable claims aren’t limited to COVID-19 either. As evidence for why agencies like the CDC or FDA aren’t to be trusted, Laffay alleged the agencies have done nothing about aborted fetal cells in junk food.

“There are hydrolite fetal cells in foods like Gatorade and Hot Pockets,” she said, airing a debunked claim that has dogged PepsiCo products including Gatorade. “And we don’t know about them. They’re not on the label. They’re used as a flavor additive. This is from aborted fetuses.”

The work history of Laffay, who did not respond to emails or calls to her private practice, is something of a mystery. In talk radio appearances she has been billed as an “emergency room physician” and she has told lawmakers she sees patients in the ER. She told a crowd in January 2021 that “I still work in a hospital setting.” Online medical directories list her as affiliated with Mercy Health Lorain Hospital and the Louis Stokes Cleveland Veterans Affairs Medical Center.

The Sandusky Register reported earlier this month that Laffay, in a promotional video for a fundraiser for an anti-vaccine group that has filed lawsuits accusing the governor of violating the Nuremberg Code via a vaccine lottery incentive for children, claimed 67 members of a hospital where she works are out with COVID-19.

However, the VA did not respond to comments about whether Laffay practices at its hospitals. A Mercy Health spokeswoman said Laffay “has been an affiliated emergency room physician but is no longer on the schedule.” She declined to say when Laffay’s employment ended.

“So here I am, this last year has taught me a lot,” Laffay said, closing out her speech at an Ohio Stands Up event. “I’m going to find my voice again and again for my country, and I’m going to do everything I can for our freedoms.”