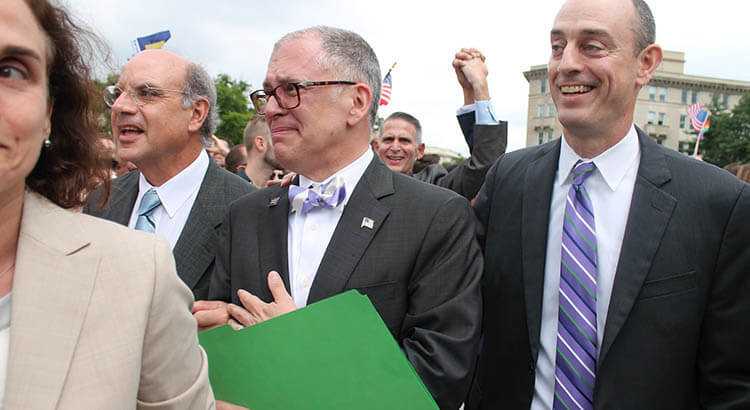 Jim Obergefell, whose lawsuit established marriage equality in the United States, is running for an Ohio House seat. The Sandusky native announced his bid for the 89th District Tuesday morning.

In the current map, the district covers the coast in Erie and Ottawa Counties, and Obergefell put protecting Lake Erie front and center in his announcement.

“We need to invest in our great lake, protect our great lake and show the nation how Ohio has smartly invested in one of the greatest freshwater assets in the world,” Obergefell said.

He talked about forming a bipartisan Lake Erie caucus with members along the coast to develop a comprehensive preservation plan. State lawmakers rolled out a similar caucus about decade ago, headed up by then Sens. Randy Gardner, R-Bowling Green, and Capri Cafaro, D-Hubbard, with Rep. Chris Redfern, D-Catawba Island. The caucus held hearings about algal blooms and in 2014 urged the EPA in not to dump sediment dredged from the Cuyahoga River in the lake. With it’s founders now out of office, it doesn’t appear the Lake Erie caucus remains a going concern.

As Obergefell made his announcement, the Ohio Redistricting Commission gathered for a new round of negotiations after the state supreme court threw out their legislative maps. The 89th District is currently held by Rep. D.J. Swearingen, R-Huron, but new round of drafting means district boundaries around the state are up in the air for now. Obergefell says he’ll be running regardless.

“I need to fight for the people where I live,” he said. “My family, my friends, the people I know, the people I don’t know. So whatever that district ends up looking like that really will have no impact on my decision to run.”

Still, Obergefell acknowledged how redistricting intersects with partisanship, and the potential stakes for LGBTQ issues in Ohio. He voiced hopes that the new maps will better reflect voter’s wishes.

“My hope is that means the hostilities, the divisiveness, the hyper-partisanship will start to fade away,” he said. “And we’ll start to have a legislature that looks like us, cares for everyone, and a lot of these really harmful things that happened, especially targeting the LGBTQ plus community will come to an end.”

In office, Obergefell said he would support the Ohio Fairness Act which would codify protections based on gender and sexual orientation when it comes to employment, housing and public accommodations.

Former state health director Rick Hodges — Obergefell’s ostensible opponent in the landmark Obergefell v. Hodges Supreme Court case — is actually a long-time friend of Obergefell. Hodges, a Republican, is also a former state representative, and he’s excited at the prospect of having a person like Obergefell in the House.

“He approaches people, and government and politics out of a spirit of civility and trying to find solutions to problems,” Hodges said. “And to me, that’s exactly what we need right now.”