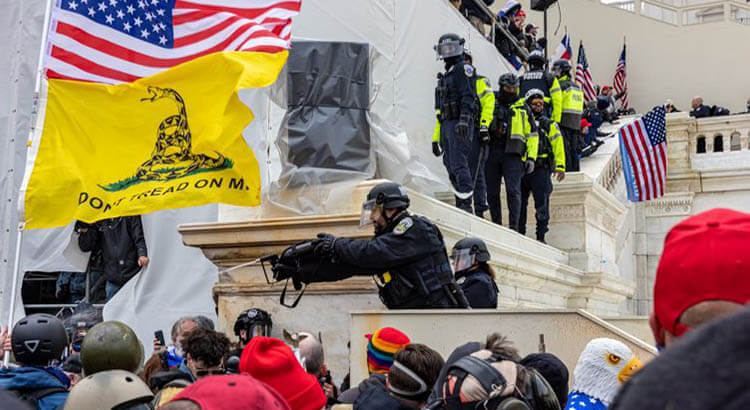 If the point of the Jan. 6 insurrection was to establish that a significant portion of the country is done with democracy, it succeeded.

The attack on the U.S. Capitol one year ago by violent supporters of former President Donald Trump — whose lie that the 2020 election was stolen from him was the fuel for the attack and whose exhortations to followers that they march on the Capitol and “fight like hell” was the spark — is the most consequential episode of domestic discord since the Civil War.

Some leaders excused the attack or sympathized with the attackers. John “Tig” Tiegen, a surrogate for Trump’s reelection campaign in Colorado, said about the attack in the hours after it occurred that “a little fear is always good.” Republican U.S. Rep. Lauren Boebert of Colorado has sought better treatment for Capitol rioters charged with crimes.

But the attack horrified most Americans, who were aghast at its violence and shocked that such a breakdown of constitutional order could occur in the United States. A common expectation in the immediate aftermath of the insurrection was that such a stain of MAGA toxicity would compel Republicans who previously feared Trump’s wrath to finally reject him as a danger to the republic and would demonstrate to conservative voters that, no matter how much they might admire Trump’s brash manner or believe he was “good on the economy,” he would ultimately tear the nation apart.

“Hey, Republicans who supported this president,” said a visibly shaken Stephen Colbert on the night of Jan. 6, 2021. “Have you had enough?”

The answer, as is clear 12 months later, is no.

Within hours of the Capitol siege, Republicans voted to object to the electoral votes from Arizona and Pennsylvania. In all, 147 GOP senators and representatives joined this disgraceful show of contempt for democracy, and it was only the first proof that the insurrection, far from chastening Republicans, was in fact an articulate expression of the party’s aims.

The lie that the 2020 election was fraudulent was advanced most brazenly, on election night, by Trump himself. Only days later, America First fundamentalists, who have no interest whatsoever in free and fair elections, birthed the “stop the steal” movement, and it has since only gained momentum. “Election integrity” activists, as they so preposterously style themselves, have turned up all over the country seeking, through the courts, at county clerks’ offices, and in neighborhoods, to spread the gospel of fraud so that American voters will never again trust an election. These are the franchise haters responsible for the sham election “audit” in Maricopa County, Arizona, and the election system security breach in Mesa County, Colorado. Groups of self-appointed, conspiracy-crazed “canvassers” have gone door-to-door bullying voters with “election integrity” interrogations. Trumpist state legislators in 19 states since the 2020 election passed 34 laws restricting access to voting.

Assaults on democracy indisputably have had the intended effect. Only 1 in 3 Republicans say they’ll trust the 2024 election, according to a recent poll. Another recent poll found that 30% of Republicans agree that “true American patriots might have to resort to violence in order to save our country.”

The election-losing right decided even before Trump it cares more about power than democracy. Gerrymandering, especially since 2010 and reaffirmed in the latest redistricting process, has undemocratically tilted the electoral scales right. The Senate, egregiously undemocratic by its very design, in that one voter from sparsely-populated Wyoming effectively wields about 70 times more influence in the Senate than one voter from dense California, increasingly favors the interests of white, non-college educated voters.

Beyond structural flaws, extreme Republican tactics have drained the once-proud institution of democratic energy and saturated it with partisan poison.

Even the military, typically vaunted for its nonpartisan quality, is compromised. “The potential for a military breakdown mirroring societal or political breakdown is very real,” wrote three retired generals recently in The Washington Post. “The signs of potential turmoil in our armed forces are there. On Jan. 6, a disturbing number of veterans and active-duty members of the military took part in the attack on the Capitol.” If the next presidential election is contested, “it is not outlandish to say a military breakdown could lead to civil war.”

But the most critical recent indication of the right’s antipathy to democracy is that the insurrectionists for the most part got away with it. About 700 attackers have been arrested so far, but about 3,000 people are thought to have illegally entered the Capitol or fought police on Jan. 6. And insurrection leaders have escaped meaningful repercussions for their enemy-like behavior. Steve Bannon. Rep. Mo Brooks. Rep. Paul Gosar. Boebert. Rep. Marjorie Taylor Greene. Mark Meadows. Jeffrey Clark. These and many others, who in significant ways are responsible for the attack, should be treated with the same status as a felon or foreign adversary, yet they retain their freedom and, infuriatingly, in the case of office holders, immense power.

Then there’s Trump himself. The man is the greatest domestic threat the republic has ever known, and he is singularly responsible for the insurrection. But not only have his crimes against the nation cost him nothing, he is likely to win the next Republican nomination for president.

America has faced times of extreme internal division in the past. But never in the country’s history since the Civil War has a massive faction of Americans been such a threat to America. Never have so many elected Americans put democracy in such jeopardy. Never has the very occupant of the White House been a seditionist. Never has a whole major political party been so unwaveringly devoted to layers of country-wrecking lies. The Capitol was invaded once before. But not by Americans, and not spurred by the highest public official in the land.

Bad faith, empty oaths, lies and sedition have so hobbled national institutions and channels of political power that they have effectively ceased to function. The system no longer serves the interests of the people and is incapable of responding to their will. It must be altered if democracy is to persist. More than two centuries of general success makes the republic venerable but not inviolable. The Constitution is not scripture. What matters more than any office, article of law or national tradition is the people’s welfare, and the lesson of the insurrection and its aftermath is that the people have before them the grave task of reclaiming and securing their democratic prerogatives.

This is an optimistic message. Jan. 6 was one of the darkest days in the nation’s history, and the year since has further dimmed the prospects for favorable public affairs under present conditions. But however grim the post-insurrection United States appears, there’s no need for those citizens who favor truth over disinformation, freedom over fascism, and democracy over authoritarianism to resign themselves to the oppression that Trumpian tyrants are keen to impose.

Just as America has endured past division it has also seen heroic resistance to abuses. It is the land of the civil rights movement and the women’s suffrage movement and emancipation. All such admirable efforts descend from the noble promise of the country’s founding and its separation from the British crown. In that spirit are America’s democracy defenders to proceed in the months and years ahead.

Americans for decades regarded their country as exceptional. Their government seemed immune to the kind of breakdown and corruption that’s so prevalent elsewhere in the world. Now they know it’s vulnerable, because they can see that it is sick. If the country’s case is terminal, the prescription for its people is to seek a rebirth.