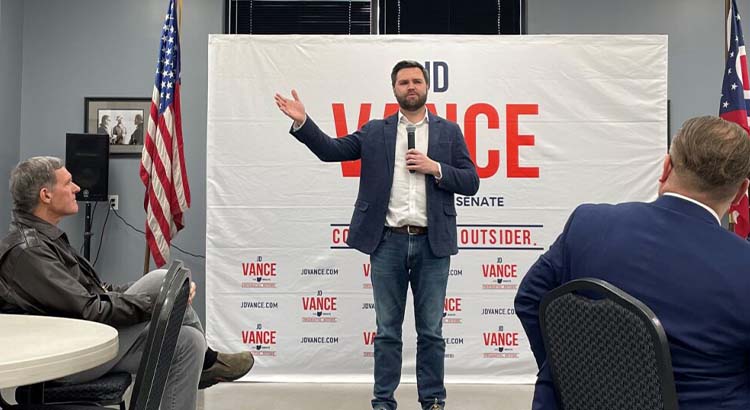 Candidates on both sides of the aisle have been campaigning for months, crisscrossing the state, blanketing social media and elbowing into football game ad breaks. Vance’s stop in Delaware is part of a week-long “No B.S. Tour.” Over the weekend he visited the Cincinnati area, including a stop in his hometown of Middletown, which he depicted in his memoir, “Hillbilly Elegy.”

Lori Flaglor came with her friend Nydia McClenathan to get a sense of the candidate. Flaglor read the book and she’s been drawn to his recent statements.

“I’m kind of curious about whether he’s gonna be a fighter,” she says. “He seems like a bulldog, and I think that’s what we need.”

At a table in the back of the banquet hall, Victoria and Jacob Waynick did their best to wrangle two little kids. They both found an affinity with Vance through “Hillbilly Elegy” — Victoria noting similar family roots and Jacob noting his time in the military. The couple had the day off so they decided to come hear what he had to say, but they’re still considering the field of candidates.

Despite the setting, Vance didn’t spend a much of his time talking about guns. He told the 40 or so people on hand how much he was looking forward to shooting Mamaw’s .44 afterward, but that was about it. Instead, he opened with a mea culpa for his previous rejection of Trump.

“I’m not gonna hide from the fact that I did not see Trump’s promise in the beginning but you know, he delivered,” Vance said. “He delivered, and he cared about people. And I think that’s important. It’s important (to) change your mind.”

He tried to turn the ads attacking him for those statements to his favor, arguing it’s indicative that the campaign has momentum and it’s “shaking things up.”

It’s a bit too soon to say whether that’s true. The field is crowded, and polling is limited. Vance’s book has certainly helped out with name recognition, but frontrunner Josh Mandel has actually won a statewide election before as Ohio Treasurer. Other candidates like Mike Gibbons have made runs in the past and as former Ohio GOP chair, Jane Timken has connections around the state. A recent poll commissioned by Club for Growth, which is backing Mandel, showed Vance is trailing all three. On the other hand, the same poll put “undecided” in second place and “someone else” beat the other two candidates pollsters asked about.

Vance’s pitch in the room emphasized economic arguments about trade and immigration that wouldn’t have been out of place 30 years ago.

“It was a choice that our leaders made to ship our manufacturing and industrial base off to communist China, a regime in a country that hates us,” Vance argued. “It didn’t happen because of economic law. It did not have to happen. It happened because our leaders chose to let it happen. It’s one of the stupidest things that an American leadership class has ever done to its country.”

Vance praised Trump for being ahead of party leaders when it comes to trade and immigration policy. He shared a story about talking with a hotel chain CEO who complained about having to pay higher wages because Trump’s policies meant he could hire fewer immigrants.

“We should like the fact that when we have a secure border, American business leaders have to pay American workers higher wages. Isn’t that what we want?” Vance said. “We want people who work hard and play by the rules to get higher wages. We don’t want our leaders to go and lobby the government to allow them to import low wage foreigners to undercut the wages of American workers.”

It has been widely reported that the Trump Organization itself relied on undocumented and temporary immigrant labor at his resorts for years.

“If America’s leaders cannot speak to their own citizens and their own constituents using modern forms of communications, this country’s done. We lose something fundamental,” Vance argued.

Trump and Greene were both permanently suspended from Twitter. Trump over concerns of inciting violence in the wake of Jan. 6, and Greene after repeatedly spreading COVID-19 misinformation. Greene’s official, congressional Twitter account remains active.

Vance fielded questions after his speech from voters. What can one senator really do? Raise a lot of hell; what sets him apart? He sees the “leftwing takeover” for what it is, and will act aggressively; what about term limits? If you can’t get it done in two terms it’s time to look for a new job; worries about him working across the aisle? Well, there’s good bipartisanship and bad bipartisanship.

One voter pressed Vance on his own ties to tech. He got his start in venture capital working for a firm headed by Peter Thiel, and Thiel has cut a $10 million check to an outside group supporting Vance’s candidacy. But Vance argued that Thiel, despite making a fortune in the tech industry, has been critical of firms’ outsized power.

“I think it’s good that I’m working with the one guy, and supported by the one guy who actually knows how powerful these companies are and why we’ve got to break them up,” Vance said.

This week Vance’s tour continues. He’ll start Monday in Cincinnati, and make a stop in Grove City before heading to the Youngstown area. Tuesday he’ll trace the state’s southeastern border with stops in Woodsfield and Marietta on his way down to Portsmouth.