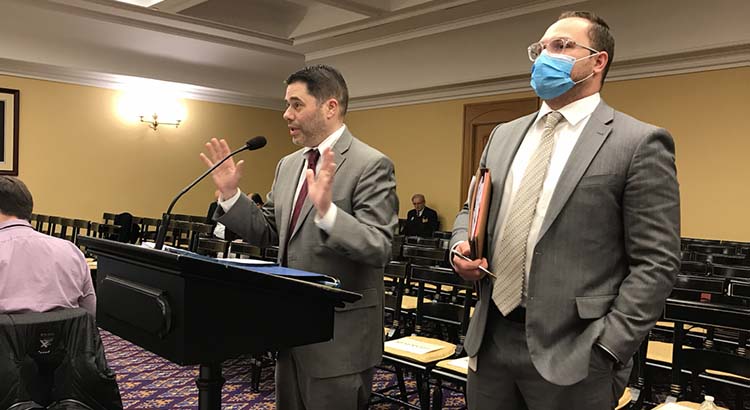 After two more days of discussion and debate, the GOP majority on the Ohio Redistricting Commission adopted four-year legislative maps Saturday night with a 5-2 simple majority, setting up the time table for potential objections and court review.

The Ohio Redistricting Commission meeting went into Saturday night after recessing Thursday and not meeting again until 2:30 p.m. Saturday afternoon.

During the Saturday afternoon session, Republicans and Democrats presented separate maps, though the Democratic co-chair of the commission, state Sen. Vernon Sykes, D-Akron, said the purpose of the Democratic caucus effort was not to present separate maps as much as it was an exercise to prove constitutionally proportional representation could be done. 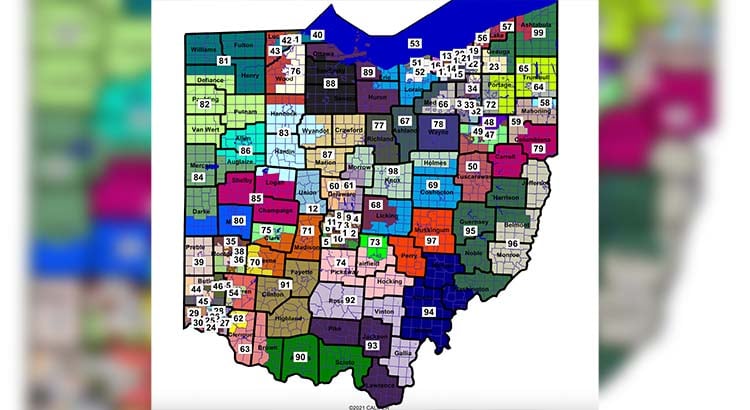 Ohio House districts, as proposed by the GOP majority and adopted by the Ohio Redistricting Commission on Saturday.

It became clear as the day went along that disagreement was still threatening the process. House Speaker Bob Cupp said even in the last hour of the commission’s time on Saturday, when they recessed to discuss each plan, the co-chairs were discussing whether or not it was worth it to continue negotiations or try to amend the maps.

“A majority of the commission felt that that was just, while it may have been a good thing, was not possible to do,” Cupp said.

Earlier in the day, the Democratic co-chair said members of his caucus were still operating under the idea that agreement and common compliance to the constitution was at the end of the redistricting tunnel.

“Not until just a day or two ago was I told that there was a feeling that we could not meet the proportionality requirements,” Sykes said.

The Ohio Supreme Court told the commission they needed to come back with a map that followed Section 6 of the constitution, the part of the redistricting process that prohibits overt partisanship. The court said the commission had to endeavor as much as possible to get to a 54% Republican to 46% Democratic split in statewide voter preferences.

The Republican maps adopted had a 57 GOP to 42 Dem split in the Ohio House, and a 20 GOP to 13 Dem breakdown in the Senate. Four of the Democratic-leaning seats give the Dems a narrow 50-51% advantage, considered a tossup by many. All but one of the Senate seats in the plan were above 54%.

In the House, 12 of the “Democratic leaning” seats in the GOP plan could also be considered tossups, with a Dem favor of only 50-51%. All of the GOP-leaning seats favor Republicans by more than 52%. 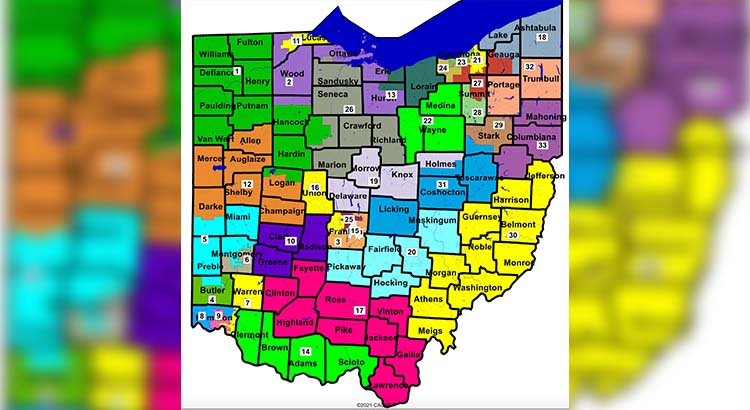 Ohio Senate districts, adopted by a 5-2 simple majority of the Ohio Redistricting Commission on Saturday.

After the vote, Cupp argued that while 54-46 was a goal expressed by the supreme court, perfection was not. He denied that the constitution or the court order spoke to an “absolute ideal,” instead saying the court wanted a plan to “closely correspond.”

“If the ideal is 55 House seats or 54 House seats, we have 57 leaning Republican,” Cupp said. “That is just three seats off and in a 99-member legislature, that is essentially 97% to the goal.”

The minority side released an opposition statement, read at the end of the ORC meeting by House Minority Leader-Elect Allison Russo, D-Upper Arlington, which accused the Republican commissioners of “a lack of political courage and a blatant disregard for the court’s order and the will of the Ohio voters.”

She also touched on the same concern that Democratic mapmaker Chris Glassburn brought up in the last few days of commission hearings, the “razor-thin margins,” those districts considered tossups, within the maps.

He spoke on the topic again, saying the Democratic proposal has less tossup districts, which leads to less concern that the Ohio Supreme Court could consider the map “asymmetrical” in its partisanship.

Glassburn also maintained his previous stance that the majority party wasn’t working to the same ends as the Democrats.

Republican mapmakers Ray DiRossi and Blake Springhetti presented the map before the commission, saying they spent the week attempting to bring the maps into compliance with the constitution and the supreme court order.

“The decisions were centered around complying with the court order, and closely corresponding with Section 6, and we did this,” Springhetti told the commission.

The Republicans also released a statement to comply with a constitutional requirement explaining why a 4-year map was passed with a simple majority, rather than a 10-year, bipartisan map.

“The commission believes that the number of Republican-leaning districts and Democratic-leaning districts closely corresponds to strict proportionality, particularly in light of the distribution of voters and geography of Ohio,” the statement reads.

The adoption of the maps sends them back to the state’s high court for review, and sets the stage for a three-day window in which objections can be filed with the Ohio Supreme Court, who said in their decision rejecting the previous maps that they would oversee the process yet again.

Anti-gerrymandering groups have already come out in force against the maps, criticizing not only the final product but the lack of public process along the 10-day stretch.

“I knew it would be a challenge, but it certainly becomes a challenge when you don’t engage in a public process, when you don’t actually discuss regionally,” said Catherine Turcer, executive director of Common Cause Ohio.