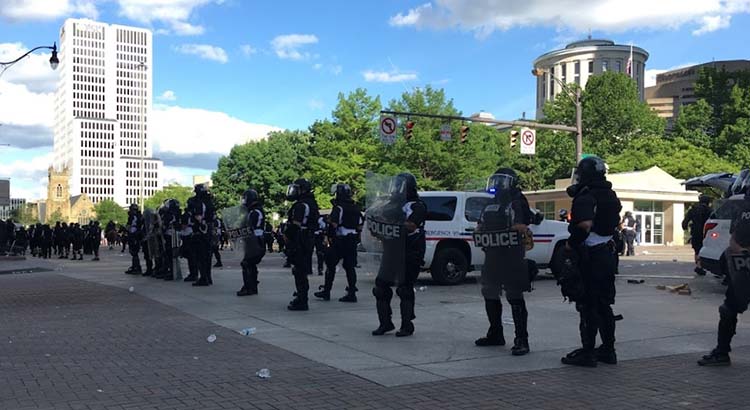 Columbus Police in the intersection of Broad and High Streets in May of 2020. (Photo by Nick Evans)
ShareTweet

The city of Columbus is nearing a decision on a new inspector general, tasked with leading a new office investigating police misconduct and answering to the city’s civilian review board.

The four finalists participated in a virtual interview of sorts last week. Pamela Davis is the former chief investigator with Detroit’s civilian oversight agency; Jacqueline Hendricks-Moore is currently serving as a senior investigator in the same office. David Harper serves as inspector general for Florida’s Department of Financial Services and held a similar police oversight position in Albuquerque. Rena Shak, the lone finalist from Ohio, has no direct experience in an oversight role but works as an attorney with the Franklin County public defender.

Columbus’ reforms are part of broader move toward civilian oversight of the police. Around the country cell phone video, and sometimes even body cam footage, has repeatedly undermined police justifications for use of force. Particularly after the murder of George Floyd, cities like Columbus moved to install an outside agency to hold officers accountable.

In the townhall interview, Hendricks-Moore highlighted her experience “on both sides of the badge,” working as a cop and more recently as an investigator in Detroit’s inspector general office.

Davis, who formerly led that office, pointed to her ability to bring Detroit into compliance with a federal consent decree within eight months. She described walking into an office with a backlog of 600 complaints.

“That translated to 600 people in the community whose voices were not heard, and that was completely unacceptable. A few months before I started the office was actually being fined by the federal court judge $1,000 a day for every day we were in backlog status,” Davis said.

According to Davis her team cleared the backlog in three months.

One of the officers tasked with helping clear those cases was then-Sergeant Elaine Bryant. She was tapped to lead Columbus’ police department last year. Davis described their relationship as professional and respectful but said they’re not “bosom buddies.”

Still, those Detroit connections give Adrienne Hood pause. Her son was shot and killed by Columbus police in 2016, and in the years since she has become a vocal advocate for reform in the city.

“We’re not looking to shift leadership from Detroit to Columbus, and that is no knock or disrespect to the experience that they have and could potentially bring,” Hood said. “It’s just, I don’t know, I’m just a little unsettled with that piece of it right now.”

“They probably knew of her work there and figured if she came here this must be a good place … to transfer to or there must be great opportunities here in this city,” Hightower said. “I think that’s a testament to the great work that’s being done here around the civilian review board that the city now looks like it’s a lot more progressive than ever before.”

Shak doesn’t have the same direct experience with an investigative role, but she argued her experience locally in the public defender’s office is important. She explained just being in the city over the last decade gives her a greater appreciation for where relations stand between police and community. Interacting professionally with law enforcement and community organizations will enable her to get up and running quickly she said.

“I believe that just knowing the landscape and knowing the history of the relationship between our community and the Columbus division of police really is an advantage here,” Shak said, “because I’ve seen it, I’ve lived it and I can really empathize with our community as well as our police officers.”

Harper, on the other hand, readily acknowledged his gaps in experience when it comes to the community, but argued he’s built a professional track record showing he’s sensitive to those weaknesses, and will take steps to mitigate them.

“I’m ignorant,” he said. “I did not grow up in the community in which you grew up. It’s going to be critical for me to have a team that represents the people we’re serving. I have that now in my office. I had that in Albuquerque in my office, that’s going to give us credibility. That’s going to really help us establish that trust.”

That candor appealed to Hood.

“I appreciate that because that’s something you can work with,” Hood said. “He recognized what he needed to do, where his deficiencies were and he did what was necessary for him to, you know, to be able to build that relationship with the community.”

Hightower appreciated it as well, but she’s more uncompromising about the kind of experience she wants to see in the role.

“Cultural competency is real important part of this job,” Hightower said. “I don’t even know how to say anything else; this is too important of a position, where if this is not something that is already a part of your toolkit then this is probably not the right position.”

Columbus isn’t the only city in Ohio with a civilian review system for its police department. Cincinnati’s board, established as part of an agreement with federal authorities, has been in place for nearly twenty years. Cleveland’s commission was set up through a consent decree with the U.S. Department of Justice, as well. Last November, voters there approved a measure giving the commission — not the mayor, public safety director or police chief — control over investigating misconduct and handing down discipline.

Whoever is selected as Columbus’ inspector general won’t have the same broad authorities. Under the contract with the Fraternal Order of Police, the board and the inspector general can sit in on investigations of criminal misconduct. They can also conduct non-criminal investigations. Unlike the previous contract, civilian authorities can compel officers to participate. That point led to numerous officers refusing to cooperate with a review of police conduct during George Floyd protests. An arbitrator recently determined the officers have to talk.

Columbus’ civilian review board members will select the inspector general by a 2/3 vote, and the mayor must confirm their appointment.