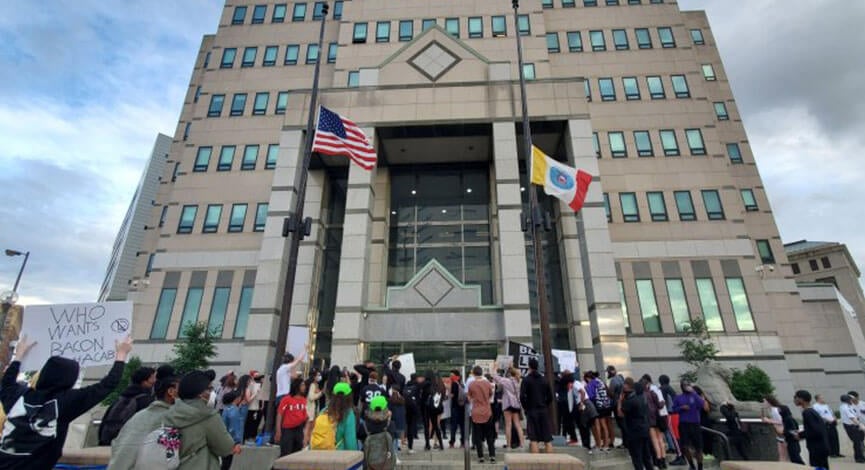 Protesters at police headquarters in Columbus in May 2020. Photo by Tyler Buchanan, Ohio Capital Journal.
ShareTweet

Columbus, Ohio — An arbitrator has ruled that Columbus police officers will have to testify about colleagues as part of criminal investigations on police conduct during 2020’s protests.

Among the incidents was the June 1, 2020 pepper spraying of three journalists with the Ohio State paper, the Lantern, as they stood off to the side of a protest and repeatedly identified themselves as journalists, who were exempted from a citywide curfew. It was one of 19 allegations of criminal misconduct as Columbus police responded to protests of the police murder of George Floyd in Minneapolis on May 25, 2020.

Three Columbus officers already have been charged with misdemeanors in connection with the protests and pleaded not guilty. They are part of a deluge of allegations of police misconduct across the United States as they responded to protests against police brutality.

But the investigation into Columbus police actions against journalists has been stalled as cops have refused to identify the officer or officers who sprayed them. While excessive use of force is a concern in any case, it can be particularly problematic when used against reporters, whose job it is to document police misconduct.

“It really was a blatant suppression of our First Amendment rights,” Maeve Walsh, one of the journalists who was pepper-sprayed, said in July 2021. She added,  “It makes a lot of sense to me that they were targeting us because we were reporters and they didn’t want people to see their actions that night.”

Some officers who could be identified from photos and videotapes shot at the corner of High Street and Lane Avenue were asked to testify and were told they wouldn’t be charged criminally for what they said. Even so, the police department’s union, Fraternal Order of Police Lodge #9, filed a grievance saying its contract with the city exempts officers from witnessing against colleagues in such situations.

Contracts police unions have with cities are said to be major barriers to reform. But in Columbus the city government contended that its police contract did not exempt police from acting as witnesses against other officers.

After a lengthy arbitration, the city won a mixed decision.

In her Tuesday order, arbitrator Margaret Nancy Johnson wrote that officials can’t incorporate information gleaned as part of an internal investigation into a criminal investigation. Nor can police and union officials who participate in those internal processes be called to testify about what they learned from them, the order said.

But importantly, Johnson wrote that it’s incorrect to interpret the contract as saying no officers can be called as witnesses against colleagues.

“Indeed, were such a restriction to be enunciated — the inability of the city to require ‘witness’ member testimony — the city would be significantly curtailed in its internal investigations of potentially criminal police officer misconduct,” the arbitrator wrote.

She added: “As stated by the city, it would not have intended to ‘shield’ police officers from the consequences of criminal conduct by relinquishing its right to require ‘witness members’ to participate in an investigation into the conduct of another member … Indeed, an interpretation which precludes the city from conducting an investigation into potential criminal misconduct of an officer by restricting its access to witness members cannot be sustained.”

One of the journalists who was pepper-sprayed said the case has moved too slowly, but she praised Tuesday’s ruling.

Kathleen Garber, the special prosecutor handling the case, said that with the ruling the investigation can proceed.

“Witness officers will now be required to answer (former FBI Agent and Special) Investigator (Richard) Wozniak’s questions or be subject to insubordination,” she said in an email. “We will be meeting at the end of the week to discuss logistics for interviews.”