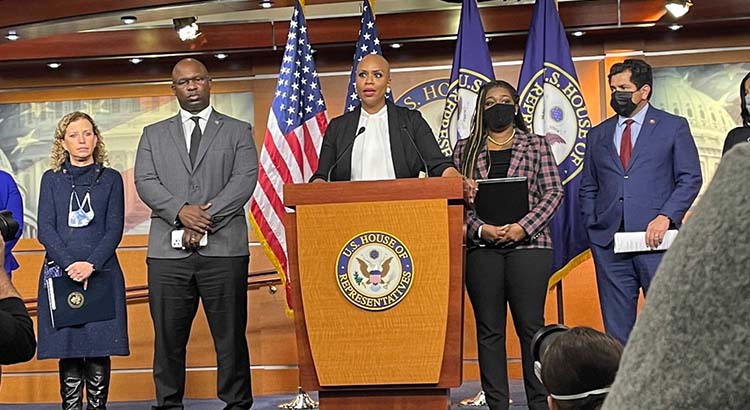 U.S. House progressives are pushing to strip Rep. Lauren Boebert of her committee assignments after the Colorado Republican suggested Minnesota’s Rep. Ilhan Omar, one of only three Muslims in Congress, was a terrorist.

Rep. Ayanna Pressley, (D-Mass.), introduced a resolution Wednesday to remove Boebert from the Natural Resources Committee and Budget Committee for violating a House rule requiring members to act “in a manner that shall reflect creditably on the House.”

At a Wednesday news conference, Pressley and a group of House progressives called on House leaders to take action.

“She is a danger to the Muslim staffers that work here,” Rep. Cori Bush, (D-Mo.), said of Boebert. “She is a danger to her fellow members of Congress. Removing her from her committees is the least leadership can do to protect every employee, visitor and member of this body.”

“For a Member of Congress to repeatedly use hateful, anti-Muslim rhetoric and Islamophobic tropes towards a Muslim colleague is dangerous,” Pressley said in a statement.

Rashida Tlaib, a Michigan Democrat who is also Muslim, said religion shouldn’t be used to target people for harrasment.

“My two sons deserve to grow up in a country where their faith or religion will not be used as a target,” she said. “Muslims across our country deserve representatives on both sides of the aisle who will embrace them, not vilify them.”

Rep. Jimmy Gomez, (D-Calif.), said congressional Republicans routinely made members of color feel unwelcome, recounting his own experience in an elevator with a Republican member he declined to name.

“I was on the elevator going to vote for Build Back Better and had a Republican member look at me and say, ‘You people are effing ruining this country,’” he said. “There is a segment of the Republican caucus that is using rhetoric in order to try to tell us, you don’t belong here.”

Asked about the resolution at a press conference on Wednesday morning, House Speaker Nancy Pelosi said that she was not yet ready to make an announcement on how Democrats would proceed.

“How we deal with addressing the fear that they have instilled with their Islamophobia and the rest is something that hopefully we can do in a bipartisan way,” she told reporters. Pelosi, (D-Calif.), and other members of the House Democratic leadership last month called on GOP Leader Kevin McCarthy to “finally take real action against racism” in reaction to Boebert’s comments.

“I don’t feel like talking about what the Republicans aren’t doing or are doing about their members, the disgraceful, unacceptable behavior of their members,” Pelosi added

A group of 62 Muslim congressional staffers and 378 “allied staffers” wrote an open letter to House leadership Wednesday calling for Congress to “categorically reject this incendiary rhetoric that endangers the physical, mental, and emotional well-being of Muslim staff.”

“Witnessing unchecked harassment of one of only three Muslim Members of Congress – and the only visibly Muslim Member – we feel that our workplace is not safe nor welcome,” the staffers wrote. “We must now come to work every day knowing that the same Members and staff who perpetuate Islamophobic tropes and insinuate that we are terrorists, also walk by us in the halls of Congress.”

The staffers signed the document with initials and did not disclose which offices they worked for, saying doing so could make them targets for abuse.

In a video posted to Facebook late last month and since deleted, Boebert told a group of supporters that she comforted a supposedly fretful Capitol Police officer concerned about Omar’s presence on an elevator by telling the officer, “She doesn’t have a backpack, we should be fine.”

She then said she called Omar, a Minnesota Democrat and one of only four Muslims ever elected to Congress, “the jihad squad.”

Omar said in a Thanksgiving Day tweet the story was fabricated.

“Fact, this buffoon looks down when she sees me at the Capitol, this whole story is made up,” she tweeted. “Sad she thinks bigotry gets her clout. Anti-Muslim bigotry isn’t funny & shouldn’t be normalized. Congress can’t be a place where hateful and dangerous Muslims tropes get no condemnation.”

Boebert released a statement on Twitter the following day apologizing “to anyone in the Muslim community” she offended and said she reached out to Omar to discuss the incident directly.

But that conversation, a Nov. 29 phone call, went poorly.

Omar said she hoped for a direct apology, but that Boebert refused to acknowledge her comments and “instead doubled down on her rhetoric.”

Boebert said on the right-wing Newsmax network the call was an attempt to “make amends” and that Omar hung up on her after Boebert demanded Omar be the one to apologize.

The resolution to remove Boebert from committees was drafted two days later, according to a timestamp on Pressley’s office website.

A spokesman for Boebert did not return an email seeking comment Wednesday.