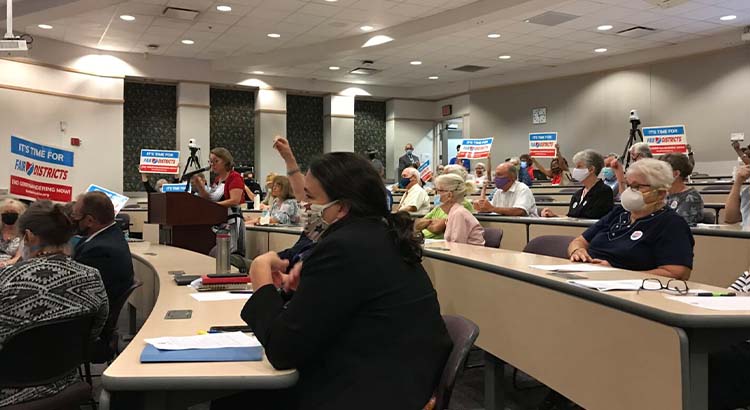 Members of the League of Women Voters and other organizations promoting an end to gerrymandering hold up signs during a public hearing in August for the Ohio Redistricting Commission in Lima. (Photo by Susan Tebben, OCJ)
ShareTweet

Voter education and advocacy groups are the next to jump in to challenge Ohio’s new congressional district map, filing their challenge late Tuesday night that calls into question the constitutionality of the map, and criticizes the process as a whole.

The lawsuit is led by the League of Women Voters, along with the A. Philip Randolph Institute’s Ohio chapter, an organization for African-American trade unionists that focuses on activism, including voter education and outreach. Also included in the lawsuit were eight individual Ohio residents identified as LWV members.

This is the second lawsuit to be filed against the congressional map. The first was filed last week by the National Redistricting Action Fund, an affiliate of the National Democratic Redistricting Committee, on behalf of a dozen Ohio residents.

Calculations included in the lawsuit argue that even with conservative margins, 10 districts will land safely with the GOP, two will be safely Democratic, and three are “arguably competitive districts that will favor Republicans.”

Under these projections, the congressional plan “safely allocates 67% of the total congressional seats (10 of 15) to the Republican Party for the next four years, despite their predicted 55% share of the vote,” according to court documents.

“In political science, an advantage of 12 to 25 points is a landslide,” the lawsuit states. “It is an ‘undue’ advantage under any definition of the term.”

Like the previous lawsuit filed against the congressional map, the LWV and the other parties accuse map-approvers of splitting counties and communities, specifically in southwestern and northeastern Ohio.

“In particular, the enacted plan splits counties and communities in Hamilton, Cuyahoga and Summit — splits that are unnecessary for any purpose other than to minimize the efficacy of Democratic votes.”

The lawsuit also claims the bias against Democratic incumbents rings clearest in the U.S. Rep. Marcy Kaptur’s northern Ohio district. Kaptur was reelected in 2020 with 63% of the vote, but the district will be split into fifths in the new map, making her reelection less likely.

“Under the enacted plan, she would only have won about 46% of the vote share in the 2020 House election,” the lawsuit states. “In her now redrawn district, Representative Kaptur will likely lose in 2022.”

Since the maps were approved, three Republicans have filed to run against Kaptur in the state’s 9th Congressional District, including state Sen. Theresa Gavarone, R-Bowling Green, who was the chair of the Senate Local Government & Elections Committee, from which the bill with the new congressional map came, and co-chair of the joint committee that reviewed the map before it was approved.

Not only did the lawsuit reject the map as unconstitutional, they also said fears of unfairness in the process led them to divert resources and staff in their organizations from some of the League’s usual activities.

“If LWVO and its members were able to rely on a nonpartisan process to produce fair maps and competitive districts, those resources would otherwise have been devoted to LWVO’s traditional nonpartisan voter education services and programs.”

The A. Phillip Randolph Institute agreed, saying their normal business of engaging with Ohioans was redirected by the fight for accountability in redistricting.

“The gerrymandered congressional map impairs APRI’s work by deterring and discouraging it members and other Ohio voters from engaging in the political process, thereby making it more difficult for APRI to engage voters through its education, registration and outreach efforts.”

The schedule is the same as the timeline set by the court for the NRAF lawsuit.

A motion may be forthcoming in the LWV lawsuit asking the court to remove members of the Ohio Redistricting Commission from it, something the members did in the NRAF lawsuit, arguing they shouldn’t be sued based on a map they didn’t approve. The court has yet to rule on the motion in that case.