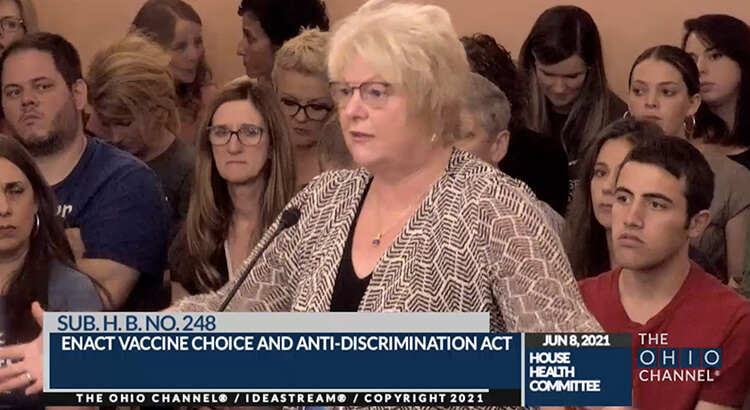 Dr. Sherri Tenpenny testifies before the Ohio House Health Committee on June 8, 2021. During her presentation, she said vaccines are magnetizing to their recipients and “interface” with 5G cell towers. Source: The Ohio Channel.
ShareTweet

The comment wasn’t an aberration from Tenpenny, who has in the past described vaccines as a tool of “depopulation.” The Ohio State Medical Board, an agency tasked with overseeing discipline and complaints of state physicians, still renewed her license in September as part what it called an “automatic” process of handling renewals.

Her renewal points to a bigger problem at the intersection of politics, mass media and public health: a loud, super minority of physicians has found ways to monetize lies about COVID-19 and vaccines that prevent it, and state medical boards are ill equipped to handle the problem, according to a report released earlier this month by the de Beaumont Foundation.

“During this ongoing public health emergency that has claimed more than 5 million lives globally, a small minority of physicians have exploited the credibility that comes with their medical licenses to disseminate disinformation to the public,” the report states. “Their lies, distortions, and baseless conspiracy theories have caused unnecessary suffering and death that are prolonging the pandemic.”

Only about 21% of state medical boards have taken any disciplinary action against a licensee for disseminating false or misleading health information, according to a survey conducted by the Federation of State Medical Boards. About 2 in 3 boards said they’ve noticed an increase in complaints on the issue.

Ohio’s medical board’s stated mission is to “protect and enhance the health and safety of the public through effective medical regulation.” Spokeswoman Jerica Stewart said state law allows the board to discipline doctors for making a “false, fraudulent, deceptive, or misleading statement in relation to the practice of medicine and surgery.” However, there’s a high standard of proof to meet. Tenpenny’s license, Stewart said, was automatically renewed, part of an automated process to keep up with the 92,000 licensees in Ohio. Tenpenny did not respond to an email.

“Ohio law prohibits the Medical Board from sharing details about received complaints and investigations even if a licensee chooses to publicly comment on their interactions with the board,” she said. “I’d also like to reiterate, a recent renewal does not prevent the board from taking future disciplinary action and does not mean that there isn’t an open investigation.”

The de Beaumont report criticizes boards that have “rubber stamped renewals for doctors who are in clear violation of medical standards, which allows them to do more harm with no questions asked.”

Medical boards have structural problems stopping them from disciplining disinformers, per the report. Their work is shrouded in secrecy, the problem is somewhat new and fast-evolving, and investigations are time consuming.

Several physicians identified in the report have spread untruths throughout the pandemic about COVID-19 all while being “able to point to their medical license for credibility.” For instance, California physician Simone Gold said in a CNN interview that vaccines are “disease-causing.” Indiana physician Dan Stock, speaking at a school board meeting, attributed a COVID-19 outbreak to vaccines. North Carolina physician Rashid Buttar claimed on CNN that the vaccine has killed more people than COVID-19.

These claims fly in the face of real-world evidence showing vaccines are incredibly powerful protectors against serious health outcomes from COVID-19 like hospitalization or death. Likewise, researchers have found there’s no increase in mortality in vaccine recipients, and that recipients had lower rates of non-COVID-19 mortality after adjusting for age and other characteristics.

The de Beaumont Foundation, a public health advocacy group, commissioned polling on the issue from Morning Consult. Of 2,200 adult respondents, about 9 in 10 said physicians don’t have the right to “intentionally spread misinformation or false health information.” About 8 in 10 said they should be disciplined for doing so.