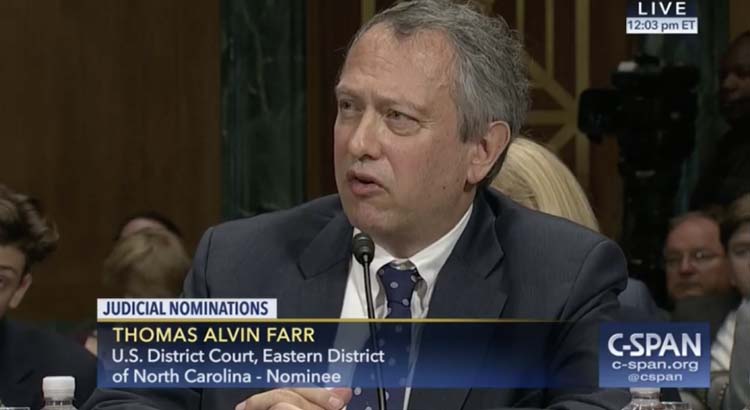 Thomas Farr during a hearing on Capitol Hill when he was nominated by Donald Trump for U.S. District Court. His nomination did not go through. Photo courtesy of C-SPAN.
ShareTweet

Defending themselves against accusations of gerrymandering, the Ohio House speaker and Senate president hired a team of lawyers with a history defending North Carolina against what a federal court called one of the “largest racial gerrymanders ever encountered.”

A spate of special interest and voter advocacy groups have filed four lawsuits alleging that Ohio officials produced maps that segment voters to give Republicans an unfair partisan advantage and cement in a veto-proof majority. House Speaker Bob Cupp and Senate President Matt Huffman, both Republicans from Lima, opted against retaining counsel through the attorney general and hired their attorneys from the Nelson Mullins law offices in North Carolina.

Two lawyers they chose, Thomas Farr and Phillip Strach, are well-known in legal circles for defending North Carolina’s 2011 redistricting proposal and the state’s sweeping voter restriction law passed in 2013. After years of litigation, both were overturned by the courts, which found they were designed to dilute and disenfranchise Black voting power.

“It’s not a mistake. I’m sure they looked at their resumes and said, ‘Wow, we need them,’” said Bob Hall, former director of voter rights advocacy group Democracy North Carolina, of the hiring. “They’re hard-nosed, win by whatever it takes for their Republican clients.”

After hearing arguments on the North Carolina redistricting plan drawn and enacted in 2011, a three-judge federal court panel in 2017 stated the maps were “among the largest racial gerrymanders ever encountered by a federal court” that amount to a “widespread, serious, and longstanding” constitutional violation. In a similar lawsuit regarding the composition of two majority-Black congressional districts, the U.S. Supreme Court overturned the maps, deeming them unlawful racial gerrymanders.

Nelson Mullins was first hired as “special counsel” Aug. 17 to “provide the Ohio General Assembly with redistricting advice,” according to a letter sent to Strach from the Attorney General’s Office, obtained in a public records request. Roughly one week later, the Ohio Redistricting Commission held its first public hearing. Republicans unveiled their first redistricting proposal Sept. 9. The North Carolina lawyers are representing the Ohio lawmakers in four lawsuits filed to date. Lawmakers have not appointed counsel in the fifth, filed last week.

Both Farr and Strach also defended North Carolina against a challenge to a 2013 North Carolina law that required voters to present state-issued identification at the polls, limited early voting, rolled back “souls to the polls” Sunday voting, ended same-day voter registration and more. A panel on the 4th Circuit of Appeals overturned the law on constitutional grounds. The judges wrote that the law targeted Black voters “with almost surgical precision” and purports to solve voter fraud and other “problems that did not exist.” The U.S. Supreme Court declined to resurrect the law on an appeal.

Spokesmen for Cupp and Huffman did not respond to inquiries about the North Carolina lawyers’ role advising lawmakers on the maps or why or how they selected counsel. Strach did not respond to an email or voicemail. Farr declined to comment.

Then-President Donald Trump nominated Farr in 2017 to serve as a federal judge in North Carolina. Despite the U.S. Senate’s historic confirmation churn of Trump’s judicial appointments, the Republican-controlled Senate declined to confirm Farr.

U.S. Sen. Tim Scott, a Republican from South Carolina and the only Black member of the Senate GOP caucus, withdrew his support and effectively foundered the nomination, according to The Washington Post. Scott cited a 1991 U.S. Department of Justice memo that detailed Farr’s work as counsel to the 1984 and 1990 campaigns of the late U.S. Sen. Jesse Helms, a North Carolina Republican.

The U.S. Department of Justice had settled with Helms’ campaign after determining it mailed nearly 124,000 postcards to Black voters as part of a “ballot security” campaign, suggesting they were ineligible to vote, and could be prosecuted for doing so. The DOJ memo states this was part of an attempt to “intimidate and threaten black voters.”

“Farr’s lifetime crusade is to disenfranchise African Americans and deprive them of their rights,” said Hillary Shelton, director of the NAACP’s Washington Bureau in 2018, joining a coalition of civil rights groups opposing Farr’s nomination. “He belongs nowhere near a bench of justice.”

Several people familiar with North Carolina politics indicated Farr and Strach are well-known names in Republican circles — Strach serves on an “Election Integrity Committee” for the state Republican Party. Given the swirl of lawsuits filed around redistricting and voting restrictions in the state, they said it makes sense that Ohio would look to North Carolina given the circumstances.

“I would say that it’s probably a pretty clear choice,” said Michael Bitzer, a professor of history and politics at Catawba College. “They wanted the experience and expertise of having to deal with a fairly intensive and divided dynamic.”

Hall, from Democracy North Carolina, said while North Carolina may have ultimately lost in court, the state legislature was effective in drawing out the litigation so several election cycles could be held using district maps that would later be overturned.

“That’s what this team is experienced at doing,” he said. “Helping their clients. Even if they ultimately lose, they can delay the ultimate decision so they can have another cycle or two or three with the maps that are already drawn.”

Gerry Cohen, a professor of public policy at Duke University who worked for the North Carolina legislature for more than three decades, said defending Republicans in the state is Strach and Farr’s bailiwick.

“I would say that Farr and Strach are among the most competent redistricting lawyers nationally,” he said. “If you were looking for folks, they would be some of the ones that would come to mind right off the bat.”