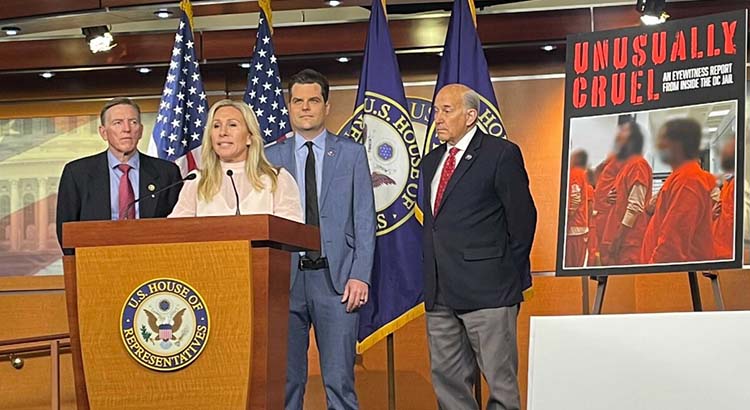 Four House Republicans held a Tuesday press conference to complain about the poor conditions at a District of Columbia jail housing inmates charged with violence in connection with the Jan. 6 insurrection at the U.S. Capitol.

But a District of Columbia advocate for prison reform in an interview said that jail and another in D.C. have been in terrible shape for years, and little attention has been paid when it is primarily local Black inmates who are affected.

A 2015 report by civil rights lawyers documented “appalling” conditions at the facilities, “especially in light of their disproportionate impact on African-Americans.”

The press event, held inside the U.S. Capitol, included two GOP members who have been stripped of their committee assignments by votes in the House — Reps. Marjorie Taylor Greene of Georgia and Paul Gosar of Arizona.

Action was taken against Greene after social media posts surfaced where she encouraged violence against Democratic leaders.

Gosar additionally was censured by Democrats for posting an online anime-style video that depicted him attacking Rep. Alexandria Ocasio-Cortez, (D-N.Y.).

A third congressman at the press briefing, Rep. Matt Gaetz of Florida, is under investigation by the Justice Department looking into sex trafficking allegations to conclude if he violated federal law by providing payments to a 17-year-old girl in exchange for sex.

The fourth, Rep. Louis Gohmert of Texas, has filed to run for attorney general of his state.

Greene at the press event issued a report on her visit to the two D.C. jails, where she talked to some of the more than three dozen inmates being held as they await their trials for their part in the Jan. 6 insurrection.

A mob of thousands of pro-Trump supporters stormed the Capitol on that date in an attempt to stop Congress from certifying the 2020 presidential election. All four of the House members at Tuesday’s press event supported at least one objection to counting President Joe Biden’s electoral votes.

Five people died on Jan. 6, including one police officer, and after the insurrection, four law enforcement officers died by suicide.

Greene said those jailed in connection with the Capitol attack are not being treated like other inmates. “The January 6th defendants are being treated differently, on a whole ‘nother level,” she said.

“These inmates are suffering from long periods of isolation from the outside world,” Gosar said. “They are being denied the right to attend chapel in the religious service, they even aren’t allowed communion. Many have described having to burn their hair by utilizing harsh chemicals to trim.”

Inmates are required to be vaccinated if they want to receive communion or get a hair cut.

Gaetz joked that he was glad House Speaker Nancy Pelosi, (D-Calif.), stripped Greene of her committees, so she could work on the report, which he called “the most rigorous report that Republicans have done in the 117th Congress.”

“This report is going to be a guidepost for ongoing Republican oversight effort in the Congress,” Gaetz said.

He added that if the GOP takes back the House in the 2022 midterm elections, Republicans are going to issue subpoenas and conduct oversight.

“The notion that Republicans are going to take control of the House, and we’re going to hold hands in a warm spring rain with the Democrats and legislate, is ludicrous,” Gaetz said.

All the lawmakers called for the Jan. 6 inmates to be released.

A panel of three judges, in a decision handed down by the United States Court of Appeals for the District of Columbia, denied bonds for rioters with charges of violence lodged against them, such as those who “actually assaulted police officers and broke through windows, doors, and barricades, and those who aided, conspired with, planned, or coordinated such actions, are in a different category of dangerousness than those who cheered on the violence or entered the Capitol after others cleared the way.”

The Justice Department has charged nearly 675 people who were involved in some part of the insurrection. But only some are being held in D.C.

Greene’s report did not take into consideration the other 1,400 inmates at that jail and another in the District of Columbia. It only focused on those who participated in the Jan. 6 insurrection.

The two jails are the Central Detention Facility, known as the D.C. Jail, and the Central Treatment Facility.

The one that is housing those involved in the insurrection is the Central Treatment Facility, which is considered to be the more adequate of the two facilities, federal officials have found.

A U.S. Marshals Service report found that the CTF was less egregious than the D.C. Jail.

The poor conditions at both D.C. facilities are not new, but with the arrival of the more than 40 individuals involved in the insurrection, there is now a revived interest — though Washington advocates have raised concerns for years.

In 2015, the Washington Lawyers’ Committee for Civil Rights and Urban Affairs released a report that condemned the treatment of prisoners at the jails.

“The appalling conditions of confinement in D.C. prison facilities, especially in light of their disproportionate impact on African-Americans, are a key criminal justice and civil rights issue in Washington DC,” the report said.

In February, a local task force issued a plan to shut down both jails and open a new main facility.

Patrice Sulton, the director of DC Justice Lab — an organization that advocates for criminal justice reform — helped put the task force report together.

She told States Newsroom she was particularly frustrated that the conditions of the D.C. jails were getting attention with the arrival of the insurrectionists.

“To have a handful of white people in what is the nicer of the two facilities raise concerns and have that strong of a response locally is incredibly insulting to the value of Black life,” she said.

Sulton said while the change is welcome, she’s hoping that it pushes the D.C. Council to implement the recommendations put forth by the task force.

“There is no such thing as a humane place to cage human beings,” she said. “We can do considerable better than we have been doing.”