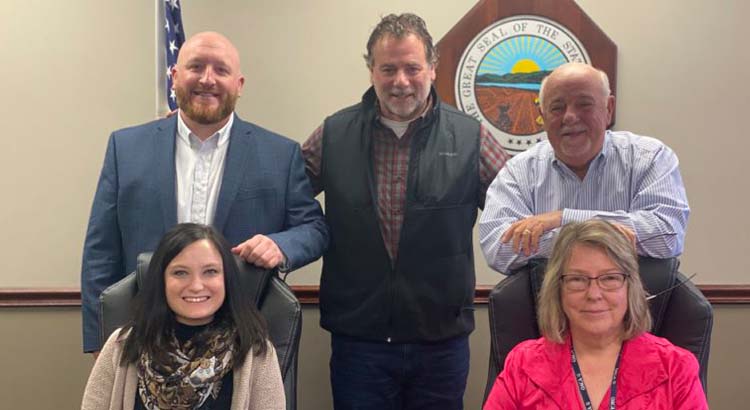 Tiffin, Ohio — The Seneca County Board of Commissioners thanked Seneca County Juvenile and Probate Court Administrator Teresa Copp for her service to the county and welcomed her replacement during a board session Tuesday morning.

Copp is set to retire on February 25th, after 20 years with the court.

Copp started her public service in the Seneca County Commissioners’ Office as Clerk of the Board. This was before the staff included a county administrator. She said she also worked for the County Prosecutor’s Office for child support services and the County Department of Job and Family Services in the Children’s Services Division. She also has served as Assistant Director of Tiffin-Seneca United Way and Director of First Call for Help.

In February of 2002, she started her career with the County Juvenile and Probate Court as a Diversion Officer under Judge Paul Kutscher. In 2008, when Judge Jay Meyer took office, Copp took on her current role as court administrator.

She said she has enjoyed her time with the county.

“My favorite part of the job was the opportunity to work with Judge Meyer and the wonderful staff at the Juvenile and Probate Court and also at the Youth Center,” she said. “In addition, I have enjoyed developing good relationships with other county offices and departments, such as the commissioners’ office, and working with them for the benefit of the county and the public we serve.”

Copp said she enjoyed tackling new challenges every day. “It has been fun and worthwhile,” she said.

The commissioners also spoke with Copp’s replacement, Sarah Mutchler. Mutchler previously worked in the Hancock County Commissioners’ Office for about nine years before taking the court administrator position. Before that, she worked at Kalmbach Feeds and The Advertiser-Tribune in the accounting department. She has a Bachelor of Science degree from Heidelberg University.

Mutchler said she is excited to be working for Seneca County.

“This is where I grew up and I feel at home here,” she said. “I look forward to helping our community grow and prosper.”

In other business, the commissioners agreed to provide a two-percent increase to the salary/wage lines of General Fund departments. The increase is supplemented by a one-time, one-percent bonus. Department heads will have the ultimate say on if the increases are provided to employees or not, based on job performance.

In other action, Tiffin-Seneca Economic Partnership President and CEO David Zak updated the commissioners on a rural broadband infrastructure initiative.

Zak said improving local access to broadband internet is a “great idea for economic development and quality of life.”

He said a Rural Broadband Task Force was created with village, township and local business leaders to seek proposals for a rural broadband expansion plan. About 10 proposals were submitted, and after an interview process, the group chose Ice Miller, LLC.

Zak said the North Central Ohio Regional Council of Governments is managing the study process. He said the goal of the plan is to have an accurate assessment of the level of broadband access offered across the county, a strategy to create infrastructure to make internet access available to all and a way to gain access to local, state and federal funding for the project.

Several initiatives at the state and federal levels have been launched, making money available for rural broadband expansion.

John Davoli, Director of NCORcog, said this is a very important project. “Internet is not a luxury,” he said. “It is a much-needed, basic utility.”

The cost for the broadband study is nearly $90,000. The commissioners indicated they support moving forward with and funding the study but said they needed to consult with the county prosecutor’s office to ensure that all legal requirements have been met before moving forward.

During new business, the board approved all resolutions from the meeting agenda, including two contracts on behalf of the Seneca County Sheriff’s Office. One contract was roughly $63,000 to rebuild the sheriff’s office dispatch center, which has equipment that is nearly 35 years old. The other is for security cameras, costing about $92,000. The projects are to be funded with federal American Rescue Plan Act money.