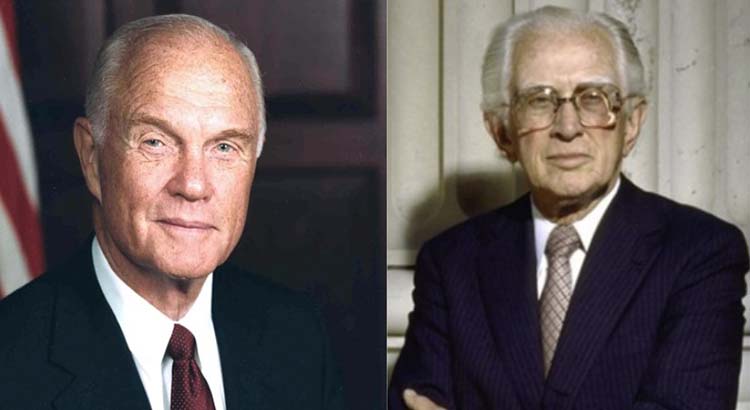 In my mailbox recently arrived a book, Jerry Austin’s “True Tales from the Campaign Trail, Vol. II,” and I don’t know by what strange voodoo the University of Akron Press knew to send it to me, but I’m an absolute sucker for these kinds of things.

It’s a collection of stories from the trenches by a wide variety of political operatives and journalists.

Campaign war stories endlessly entertain me. Get a crusty, jaded group of political journo geeks or political PR hacks together, ply them with spirituous liquors, and these types of stories get slung around like candy in a parade. You end up learning some things.

For instance, did you know that former Ohio Democratic U.S. Senators John Glenn and Howard Metzenbaum had some pretty bad blood between them after a couple bruising primaries, that is, until Glenn took to the floor of the U.S. Senate to defend Metzenbaum against some McCarthyist-style red-baiting?

In the book, former Glenn Press Secretary Dale Butland recalls Metzenbaum dragging Glenn in the 1974 primary by saying he “never held a job before.” At the Cleveland City Club debate, Glenn, a former U.S. Marine aviator, had had enough, and laid into Metzenbaum with his “Gold Star Mothers” speech:

Ouch. A few days later, Glenn won the primary and went on to win the general election.

Metzenbaum would make his own way into the Senate two years later, in 1976, defeating Republican Robert Taft.

Thus began an intense Senate softball rivalry between Glenn’s staff, “The Right Staff,” and Metzenbaum’s, “The Amazing Metz,” Butland recalled, with the two Ohio senators bringing in ringers like former Olympians and football players to try to ensure victory.

In 1985, Metzenbaum faced the wrath of the right-wing Washington Times editorial board in, “Senator Metzenbaum’s Red Face,” which implied he was somehow communist.

Butland recalled sharing the editorial with Glenn and encouraging him to defend his fellow Ohioan Metzenbaum on the floor of the Senate, which Glenn did, telling the chamber Metzenbaum deserved better than to be attacked “with this warmed-over McCarthyism.”

When Butland went to work for Metzenbaum’s 1988 reelection campaign, he reminisced, staff was working on convincing Metzenbaum to release his tax returns as Glenn had done and provided him positive press Glenn had received for doing so.

“Christ, Glenn has more money than I do,” Metzenbaum remarked looking over the files.

“Yeah, it’s not bad for a guy who never held a job, huh?” Butland remembered saying. Metzenbaum whipped around to look at him, then started to laugh.

“You know, that was the dumbest goddamn thing I ever did in politics and John shoved it right up my butt. He beat me with it and I deserved to lose.”

Tales from the Rhodes

The arrival of Austin’s book put me in mind of another classic from the genre, Tony Payton’s “Campaign War Stories.”

This one contains some real gems, but one that always gives me a chuckle is the story from Steve Sandler about Ohio Gov. Jim Rhodes pleading against scrubbers on behalf of the mothers of Struthers, a city in Mahoning County.

In 1978, Rhodes wasn’t too pleased with the Environmental Protection Agency and its effort to regulate coal. A power plant in Struthers had to retrofit its smokestacks with air scrubbers, and Rhodes trucked in 5,000 people for a rally.

“Keep in mind that Rhodes was always tongue-tied when he spoke,” Sandler wrote. “He lamented over the poor mothers from Struthers because of the scrubbers. He was tongue-tied in the first place, but between all the Struthers, the mothers and the scrubbers, no one knew what he’d said by the time he was done.”

A guy from ABC asked him if he had any idea what the governor had actually just said.

“No, I don’t. But you have to admit the mark of a great politician is to come into town, speak in a foreign language and have them screaming for 10 minutes afterwards,” Sandler replied.