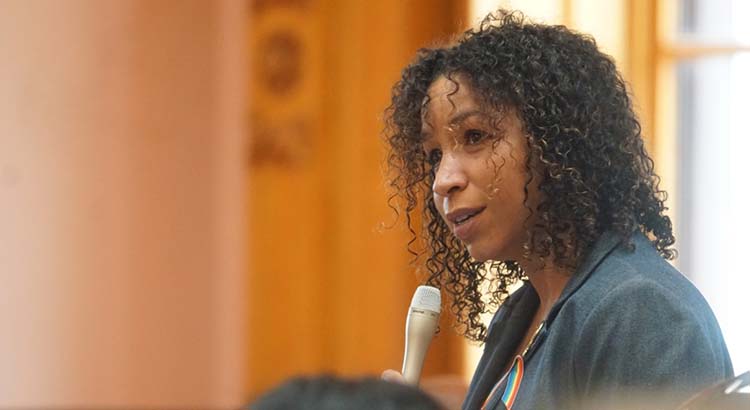 The tragic story of Aisha Fraser floats on as a cautionary tale and call to action on domestic violence for the Ohio legislature, though the bill holding her name has had an uphill battle toward passage.

State Rep. Janine Boyd, D-Cleveland Heights, has carried Fraser’s story with her through multiple general assemblies, as she tries to honor the Shaker Heights teacher and mother’s life to create a way forward for domestic violence protections.

“I, in conversations with Aisha’s mom and uncle, promised them that we would leave no stone unturned,” Boyd told the Ohio Senate Judiciary Committee during a recent hearing to introduce the bill.

The current version of the bill was approved by a House committee and nearly unanimously passed full House review on a vote of 92-4 in October. It now sits in the Ohio Senate Judiciary Committee.

Unfortunately, part of Fraser’s story is the story of a former state legislator, Lance Mason, her ex-husband, who was arrested for assaulting Fraser in 2014, resulting in broken bones in her face.

His conviction on domestic violence and felonious assaulted was shortened by a plea deal, with Mason only serving nine months of a two-year sentence.

After a 2015 divorce, Fraser continued to share custody of their two kids with Mason, and it was at a child exchange in 2018 where Mason stabbed Fraser to death outside of her car.

During the 2014 case, thousands of rounds of ammunition, along with grenades, rifles, a sword and other firearms were found in Mason’s house.

“The thought by most (domestic violence) experts after that was that he was planning this for a long time,” Boyd said.

Boyd’s bill, which once again has bipartisan support in the form of co-sponsor state Rep. Sara Carruthers, R-Hamilton, would create a “lethality assessment screening” for law enforcement responding to a domestic violence call, expand the ability for law enforcement to request an emergency protection order and make the EPO effective as soon as it’s signed by a court.

Once someone meets the lethality threshold, the bill would require that they be referred to a local or regional domestic violence advocacy service, with written policies and procedures for law enforcement in referring advocacy services.

“Aisha’s Law aims to create a continuum of strength and protections, for survivors who are in the most lethal situations, so it’s not going to end domestic violence,” Boyd said. “I would love to do that, I don’t know a bill that can do that.”

The offense of aggravated murder and domestic violence would be expanded under the bill, but a change that’s been made to the bill since its last introduction would include strangulation in the charge of domestic violence if a person is accused of “knowingly impeding the normal breathing or blood circulation of a family or household member.”

The change was made from “recklessly” at the request of defense attorneys who testified in the House earlier this year. The burden of proof is different when arguing a crime was done “knowingly” versus “recklessly.”

Carruthers signed on to the bill in previous versions partly because of a personal connection to the work. She said her mother was abused and stalked by a former husband. But the statistics from her home county of Butler further pushed her support for the bill.

She cited The Dove House, the only domestic violence shelter in Butler County, who reported an average of 138 domestic violence incidents per month for the last four months. The Ohio Attorney General reported 31,645 DVI charges in the state in 2020.

Before the COVID-19 pandemic, The Dove House averaged 30-40 calls per month, and Carruthers said domestic violence has impacted every county, especially during the pandemic.

“It was gone up tremendously since the pandemic, and I don’t foresee it going down any time soon, and I’m sure you don’t either,” Carruthers told the committee.

Whether or not the bill is likely to see passage soon is unclear at this point, though the bill had nearly 80 co-sponsors in the House, from both sides of the aisle.

The previous general assembly bill passed the House, but then died in the Senate without a full vote.