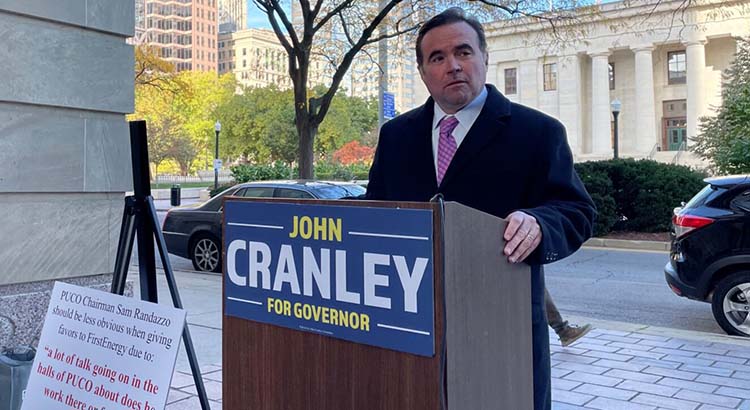 Democratic gubernatorial hopeful John Cranley is promising a scorched earth response to Ohio’s HB 6 scandal: fire every member of the public utilities commission. The outgoing Cincinnati mayor contends a clean slate is the only way to restore trust in the Pubic Utilities Commission of Ohio, or PUCO, and he has additional reforms in mind for nominating new commissioners.

Cranley cites state law granting the governor authority to remove commissioners for issues like inefficiency, neglect of duty or malfeasance in office. He also nods to former Gov. Dick Celeste who took the same drastic action when he took office.

“We have to clean house,” Cranley said. “This is the biggest scandal in the history of the state. It’s time to clean house. There may be good individuals, good human beings, but anyone associated with Mike DeWine and HB 6, has got to go. They have got to go.”

But at least some of Cranley’s plans for reform are likely a non-starter. To reduce political influence, he suggests stripping the House speaker and Senate president of their authority to appoint members to the nominating council. Such a change would require legislation — in chambers where the opposition party holds durable supermajorities.

Meanwhile, Cranley argues the governor should have more authority to tap a PUCO chair, despite criticizing disgraced former chairman Sam Randazzo as “hand-picked” by Gov. DeWine.

Cranley also reiterated his pitch for Ohio to establish an energy dividend similar to the one in place in Alaska. But while a $500 check to most Ohio families would likely be popular, his plan to pay for it with increased taxes on companies that drill or mine natural resources in Ohio likely wouldn’t, at least in the legislature.

He also suggests requiring incoming PUCO commissioners divest from regulated utilities and receive no compensation from a utility within the past year. Randazzo has yet to be charged with a crime, but FirstEnergy, the utility behind the HB 6 controversy, has admitted to handing him a $4.3 million bribe before he took up his post on the PUCO. Those changes might interest transparency-minded lawmakers looking to put HB 6 behind them, but even then, Cranley would likely face an uphill battle to codify stiff requirements.

Still, the governor can leverage a significant amount of discretion when it comes to filling commission seats on an individual basis. In January, DeWine rejected a slate of candidates put forward by the nominating council before eventually tapping recently ousted Franklin County judge Jennifer French.

Asked about Cranley’s pitch, DeWine dismissed it as empty rhetoric.

“Well I guess the political season has started,” DeWine said.  “Y’know, I’m not going to fire them. His comments are political comments at this point.”

“That’s why she introduced a detailed, comprehensive ethics reform plan in June,” Rice said in an emailed statement. “Nan’s plan, which includes a new Public Accountability Commission and ethics pledge, would address the bribery we’ve seen at the PUCO, as well as the rampant pay-to-play scandals we’ve seen all across the DeWine Administration and the state legislature.”

And DeWine is taking fire over the scandal from his own party as well. Former U.S. Rep. Jim Renacci announced his primary challenge against DeWine in June, and he’s been hammering the governor over HB 6 since. Renacci has released a campaign ad on YouTube and put up billboards tying DeWine to the scandal. He has also called on the attorney general to investigate DeWine’s connections to FirstEnergy.