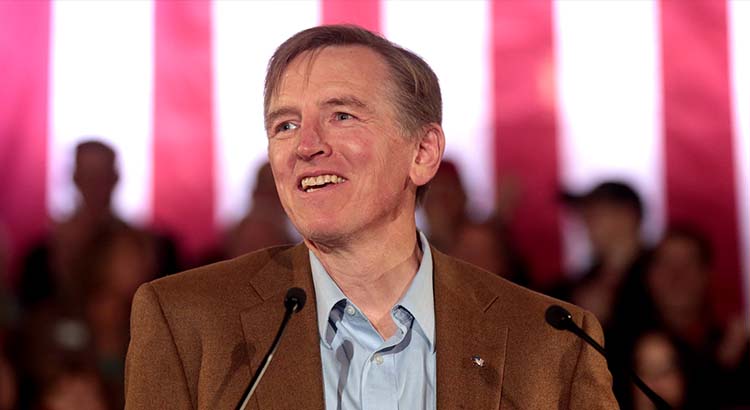 The U.S. House voted 223-207 Wednesday to censure Arizona Republican Rep. Paul Gosar and strip him of his committee assignments, following his social media post of a manipulated cartoon that depicted him attacking Democratic Rep. Alexandria Ocasio-Cortez and President Joe Biden.

Republican Reps. Liz Cheney of Wyoming and Adam Kinzinger of Illinois voted with all Democrats present for the resolution. Rep. David Joyce, (R-Ohio), voted present. Not voting were Republican Reps. Morgan Griffith of Virginia, Barry Loudermilk of Georgia and Scott Perry of Pennsylvania.

Gosar stood at the front of the House floor as House Speaker Nancy Pelosi read the censure aloud to him.

When he was called up to listen to it, several Republicans gathered behind him. They included Reps. Matt Gaetz of Florida, Andy Biggs of Arizona and Marjorie Taylor Greene of Georgia, among others.

In addition to the formal rebuke communicated by the censure, Gosar will be removed from his positions on the House Oversight and Government Reform Committee and the House Natural Resources Committee, a key panel for a member from the West.

Before debate over the resolution began Wednesday, Gosar meandered around the House floor wearing a mask adorned with the American flag. He stuck to the back of the House chamber.

Gosar flipped through papers, keeping his head down, as Pelosi during the debate chastised him for his video. Pelosi said the cartoon depicted violence against women.

“These actions demand a response,” she said. “Depictions of violence can incite actual violence.”

She slammed Republican Leader Kevin McCarthy for taking more than a week to respond to Gosar’s social media post.

On the House floor, McCarthy, of California, did not address the video and instead criticized the Biden administration’s policies and said Wednesday’s vote was about Democrats wielding their power.

He did not condemn Gosar or voice his opposition to videos depicting violence against members of Congress.

Other Republicans who spoke on the House floor to defend Gosar did the same. They blamed Democrats for the crisis at the border, inflation and rising gas prices.

Ocasio-Cortez, who spoke with a row of female Democratic members of the House seated in back of her, said it was unprecedented for a member of leadership to not condemn an act of violence against another member of Congress.

Gosar said on the House floor that he rejected the idea that he was inciting violence.

“It was not my purpose to make anyone upset,” he said. “I voluntarily took the cartoon down, not because it was itself a threat, but because some thought it was. Out of compassion for those that took offense, I self censored.”

Gosar posted the cartoon to his official Twitter and Instagram accounts on Nov. 7. It showed a sequence with the faces of Gosar, Ocasio-Cortez, (D-N.Y.), and Biden superimposed over anime characters.

The character with Gosar’s face swings swords at Ocasio-Cortez and Biden. Gosar later deleted the posts but has not apologized.

Rep. Jackie Speier, (D-Calif.), who wrote the censure resolution, said Ocasio-Cortez has become a target for Republicans to rile up their base.

“As often is the case for women of color and frankly, unacceptable,” she said.

She added that it took Gosar two days to take the video down, and by then it had been seen by 3 million people.

Pelosi and House Majority Leader Steny Hoyer, (D-Md.), said that Republicans should know that words can incite violence, given that the U.S. Capitol was attacked on Jan. 6 by a mob of pro-Trump supporters.

Several Democrats referenced that attack as a reason to take depictions of violence seriously. Social media posts led to the violence on that day, U.S. Rep. Ted Deutch, (D-Fla.), said.

“Jan. 6 must serve as a reminder of just how important this action is we are about to take,” he said.

The censure distilled into one afternoon the tensions and partisan divisions that have grown in the House since the Capitol attack.

While nearly all House members initially condemned it, a growing number of Republicans have since downplayed its seriousness.

Greene, whom the House voted to remove from committees earlier this year, gave Gosar a hug as lawmakers voted on the censure resolution. Boebert also joined them along with Biggs.

Wednesday’s vote was the first censure resolution in the House since a 2010 measure rebuking former Rep. Charles B. Rangel, (D-N.Y.), for mixing campaign and official resources.