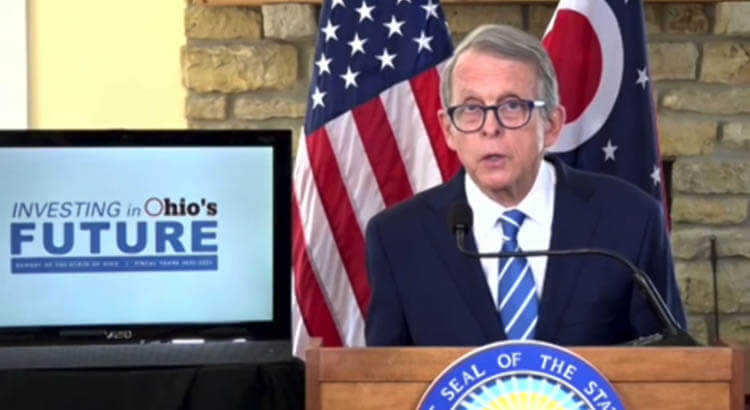 A last-minute congressional district plan is on a fast track for approval later today, Thursday. Assuming Republican lawmakers who have controlled the process from the outset support the proposal, there’s one last safety valve before final approval. But if redistricting activists are hoping for Gov. Mike DeWine to veto the map, they may be disappointed.

DeWine spokesman Dan Tierney said it would be “premature” to comment on the map since it has not received final legislative approval. That being said, he did acknowledge that DeWine has been briefed on the process by leaders in the House and the Senate.

The limits of the veto pen

The governor is operating in a tenuous political position. The pandemic has tested his control over the GOP caucus, and his experience with Senate Bill 22 sharply defined the limits of his influence. That measure restricted DeWine’s ability to impose mandates in the midst of a public health emergency. The governor vetoed bill arguing in his message that SB 22 “jeopardizes the safety of every Ohioan.”

“SB 22 handcuffs Ohio’s ability to confront crises,” DeWine wrote. “The emergence of a yet unknown, epidemic illnesses bursting on the scene — just as COVID-19 did — remains a very real threat, as does the risk of state and non-state-sponsored terrorism.”

State lawmakers quickly overrode that veto, and the sting of that response has restricted DeWine’s actions since. In September, as the delta variant pushed Ohio’s COVID cases higher DeWine argued he was powerless to impose a new mask mandate to limit the spread of the virus.

“The state legislature has made it very clear to me that they will take off a health order if I put a health order on,” DeWine insisted in a Sept. 14 briefing.

More recently, DeWine acknowledged lawmakers forced his hand on House Bill 172, a scaled back version of a Senate bill which loosens fireworks restrictions.

“Because it was clear to me that the legislature would have overridden my veto, making Senate Bill 113 the law, I worked with the General Assembly to arrive at a compromise that included changes I wanted to see in the legislation,” DeWine wrote in a statement.

Just this week, state lawmakers approved another measure which serves as a pointed rebuke of the governor’s order forcing business closures early in the pandemic. DeWine will likely sign that bill.

In 2018, DeWine’s told the Cincinnati Enquirer he expected new constitutional provisions would ensure a bipartisan process.

“The rules are pretty clear,” DeWine told them through a spokesman. “The voters said that the redistricting process should be done in a bipartisan way and when I am governor there will be an expectation that the new district maps honor the voter’s wishes.”

Since then, DeWine has approved state House and Senate boundaries that even he acknowledged were the product of a one-sided process.

“I think I made it pretty clear that I thought that the result was not where we needed to be, that we could do a better job, but that kind of a compromise was clearly not happening,” DeWine explained in a Sept. 21 briefing.

Politically DeWine appears to be on an island. In addition to frayed relations with the Statehouse, redistricting seems sure to be a campaign issue in next year’s gubernatorial election. Both Democratic candidates, former Cincinnati Mayor John Cranley and Dayton Mayor Nan Whaley, have called on DeWine to veto the maps. And on his right flank, former Congressman Jim Renacci is maintaining a steady stream of attacks, portraying the governor’s record as liberal.

University of Cincinnati political scientist David Niven says the governor’s decision to go along with a flawed set of state maps doesn’t bode well for a veto on the congressional plan.

“He voted yes for maps that he was unable to assert were constitutional,” Niven said. “Based on that track record it’s hard to imagine Gov. DeWine looking at maps, voted on by the House and Senate, presented to him and standing alone and saying no. If he couldn’t say no as part of a group, it’s hard to imagine he’s going to say no when the decision is entirely up to him.”

Speaking shortly after a House committee hearing Wednesday where the congressional map passed in an 8-5 party line vote, Jen Miller of the Ohio League of Women Voters didn’t sound particularly optimistic either.

“Does it seem as if he’s been spending a lot of time recently standing up for bipartisanship? No, it doesn’t,” she said.