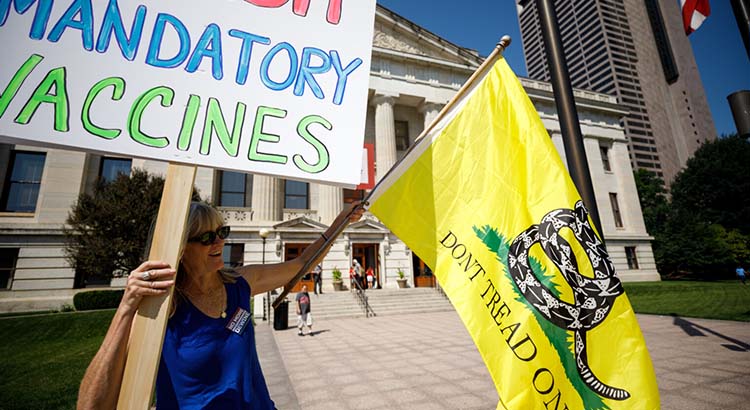 The legislation also extends a broad immunity for people and businesses against lawsuits alleging they negligently spread COVID-19. It passed with a nearly party line, 58-32 vote.

Republicans passed the bill over objections from the public health, private health care, manufacturing and general business associations who have all voiced opposition to any kind of vaccine mandate ban for months. With House passage, it now heads to the Ohio Senate for consideration.

Lawmakers first unveiled the bill just after 9 a.m. Thursday. It still technically allows schools, colleges, and employers to require vaccination from students and employees. However, it requires them to accept a broad enough range of exemptions as to dilute mandates into suggestions. The exemptions include:

The exemptions would not be available to people who work in intensive care units of hospitals or children’s hospitals. However, those employers or schools would still need to make a “good faith effort” to provide equitable instruction or employment for those who abstain from vaccination.

Rep. Al Cutrona, R-Canfield, framed the bill as a protection of personal autonomy. He criticized the “radical left” and “special interest groups” who opposed the bill. When asked about Ohio’s status as the 10th least vaccinated state in the U.S., he said the legislation will improve the health care system by preventing workers from quitting over vaccine mandates.

“I think this will make our state better in the sense of our health care system,” he said. “If we don’t have the necessary nurses to be able to treat and provide that good standard of care, how can we provide that for them if they’re walking off the job.”

Passage comes amid a COVID-19 case surge, once unthinkable in an era of easy access to vaccines. More than 2,960 Ohioans are currently hospitalized with COVID-19, up from 2,172 in early November, according to data from the Ohio Hospital Association. About 57% of Ohioans have received at least one dose of a COVID-19 vaccine.

The American Cancer Society, which represents thousands of Ohio cancer patients who face huge risks in a COVID-19 infection, said it’s “discouraged’ with lawmakers leaving cancer survivors in the lurch.

“It cannot be overstated that cancer patients who have compromised immune systems need to be protected and feel safe when receiving cancer care and doing everyday activities,” said spokeswoman Michelle Zimmerman in a statement.

The legislation has public backing from Republican politicians and anti-vaccination activists. However, most business and health care associations have offered loud opposition.

“House Bill 218 is the same backwards approach tried at the Statehouse earlier this year,” said Ohio Manufacturers’ Association President Ryan Augsburger. “At best, this bill is an unnecessary invasion of employer rights; at worst, it’s a foray into a centrally planned economy. It’s simply the wrong policy for Ohio.”

A long list of hospitals, health insurers, public health and business associations formed a bloc in opposition to various vaccine mandate bills and other legislative attacks on public health laws during the pandemic, saying it “falls short of what our state needs as we work toward pandemic recovery.”

The CEO of the Ohio Chamber of Commerce told Spectrum News the legislation shows that “legislative terrorism is alive and well in America.”

Rep. Dick Stein, R-Norwalk, chaired the committee that passed the bill Thursday morning. He said the bill is about personal choice and freedom. In a floor speech, he went on to lament the changing guidelines on masks, vaccination and booster shots as new information emerges.

“We will never get to a level of herd immunity or fully vaccinated by mandating,” he said. “We need to do this through education, and free will and personal choice between physicians, and families, and the communities they live in.”

Rep. Beth Liston, D-Columbus, a physician who has treated COVID-19 patients, said the legislation will foment mistrust in vaccination and is an act of “pandering” to conspiracy theorists and misinformation.

“Everyday, dozens of Ohioans are dying from a disease that we can prevent,” she said. “This is a bill that will prolong the pandemic and worsen the confusion.”

The bill’s supporters regularly deny the label “anti-vaccine” and insist it’s a medical freedom issue. However, vaccine disinformation has dogged the bill every step of the way. A committee witness in June told lawmakers that vaccines “magnetize” recipients and “interface” with cell phone towers. A lawmaker said in August that vaccines kill children. Two lawmakers have recently suggested legislation broadening access to ivermectin, a debunked COVID-19 treatment that remains popular against people who refuse COVID-19 vaccination. These claims seldom receive pushback from fellow backers of the anti-mandate legislation.

What’s in the bill?

The legislation is not specific to COVID-19. It applies to any school or employer who wishes to require a vaccine, drug, biological product, any “genetic immunotherapy” using DNA or mRNA, or any other “genetic vaccine technology.”

Additionally, the bill outlaws the use of a “vaccine passport” — requiring proof of vaccination for entry to a business or government building.

Lastly, it offers people a legal shield to use against lawsuits alleging they negligently spread COVID-19. Plaintiffs would need to meet a higher legal standard to bring such claims by demonstrating the defendant spread COVID-19 recklessly or intentionally.

The legislation also creates a presumption that violating a government order or recommendation — something like a mask mandate — is not admissible as evidence that the defendant acted negligently.

The vaccine piece of the legislation would expire in September 2025. The immunity would end in 2023.

HB 218 is but the latest in a torrent of public health attacks from Ohio Republicans. State lawmakers overrode a veto from Gov. Mike DeWine earlier this year on legislation that blocked the health department from issuing quarantine and isolation orders and granted lawmakers veto power over health orders.

DeWine signed other legislation temporarily banning vaccine mandates earlier this year. This week, he signed separate legislation limiting the governor’s ability to order shutdowns in response to emerging pandemics. If the Ohio Senate passes the bill as well, DeWine will have to decide whether to sign it or face another potential veto override.

Several media reports have indicated that a bloc of hardline anti-vaccine lawmakers would withhold their support for decennial redistricting unless the House passes HB 218. In interviews, several lawmakers said they had heard secondhand remarks to this effect, but generally denied any link between the pieces of legislation.

Cutrona denied it as well.

However, House leadership pulled substantially similar legislation to what passed Thursday on two occasions in the past three months, citing insufficient support.