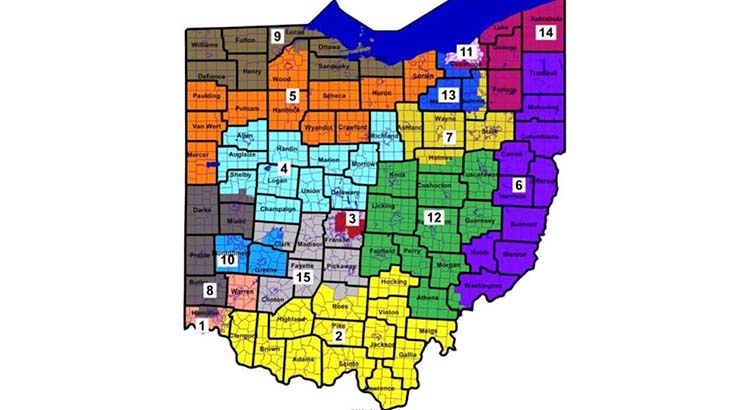 The GOP congressional map passed through the state Senate on Tuesday afternoon.
ShareTweet

The Ohio House has approved new congressional districts that will give Republican candidates a significant electoral advantage for the next four years. The map will only be in place for those two election cycles because not a single Democratic member voted for it. The map now heads for Gov. Mike DeWine’s desk. If DeWine signs it, legal challenges seem sure to follow.

The map approved Thursday in the House was introduced just Monday night as an amendment replacing the maps previously discussed in committee hearings. After the map was unveiled, it had one hearing in which a committee heard public comment. Every speaker was an opponent. The Princeton Gerrymandering gave the map a flunking grade.

The map’s sponsor, state Sen. Rob McColley, R-Napoleon, argued those last-minute revisions were responsive to arguments he’d heard in committee. The Mahoning Valley is kept whole, ditto that for Starke and Lucas counties. Dayton and Springfield are wrapped into one district.

McColley also argued his map was the “most competitive offered by any caucus.” He insisted on looking to statewide federal elections over the past ten years, which shows an average partisan breakdown of 54% Republican and 46% Democratic. But rather than applying that ‘competitive’ partisan index statewide — either with 15 competitive districts, or a map likely to yield results in line with the index — McColley instead brags that just seven districts fall within those parameters.

In both the Senate and the House, lawmakers cut corners — advancing the measure to the floor without first passing through the chamber’s Rules Committee.

Rep. Brigid Kelly, D-Cincinnati, made an all-politics-is-local argument. Cincinnati’s Brent Spence Bridge is in desperate need of repairs, but Kelly noted none of the three Republican congressmen who would represent Hamilton County under the new map voted in favor of the federal infrastructure bill that will help fund those improvements.

Meanwhile, Rep. Thomas Brinkman, R-Mt. Lookout, retorted he had a smile as “wide as the Ohio River” knowing that the county would have three representatives in Congress. And Rep. Bill Seitz, R-Cincinnati, taunted Democrats listing off Ohio’s statewide officeholders, all of whom are Republicans.

“Is the whole state gerrymandered? Or have we become a red state?” Seitz needled. “Perhaps those arguing for fairness might next propose a constitutional amendment that we somehow reach up and draw Detroit into the state of Ohio — to make it more fair! Or to draw Pittsburgh over the Ohio river — to make it more fair!”

After the floor session, House Speaker Bob Cupp defended the maps a significant improvement on any previous congressional boundaries.

“It does have two districts that lean solidly to the Democrats, it has six districts that lean totally Republican,” Cupp said. “But there are seven competitive districts have within plus-or-minus four percentage points and this is quite a change from what the current maps are.”

Voting rights groups are urging Gov. DeWine to veto the maps now on their way to his desk. DeWine has yet to weigh in on the congressional maps proposal.

Speaking after the vote, Andrew Washington from the A. Phillip Randolph Institute argued the map is bad for communities of color.

Jen Miller of the League of Women Voters of Ohio and Catherine Turcer of Common Cause Ohio said legal action or even a ballot referendum are on the table if the governor decides to approve the maps.

Miller in particular expressed frustration with the whispers that some conservatives in the chamber used their votes on the map as leverage to gain passage for a measure limiting employer vaccine mandates. She says nothing was more important than passing fair maps.

“The fact that this vote would be hijacked potentially as a political chit for an entirely different piece of legislation shows me that this General Assembly does not respect to voters and does not respect the Constitution,” Miller said. “There is nothing more important than getting this right and they have failed.”