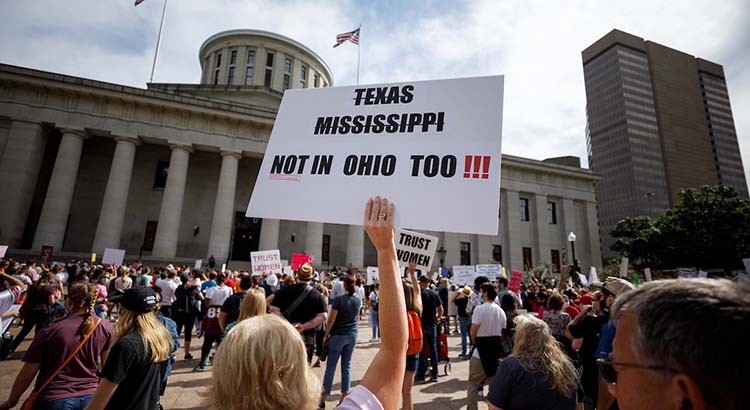 COLUMBUS, Ohio — More than a thousand people gathered at the Statehouse as part of the nationwide Women’s March focussing on reproductive rights. The planned march to Goodale Park was changed to a circuit around downtown due to the large turnout, Saturday, October 2, 2021. (Photo by Graham Stokes for the Ohio Capital Journal).
ShareTweet

A new abortion ban bill created in conjunction with a Virginia-based anti-abortion group has been introduced in Ohio that mimics a Texas law currently before the U.S. Supreme Court, but goes further by proposing to ban nearly all abortions.

State Rep. Jena Powell, R-Arcanum, introduced House Bill 480 on Tuesday, which allows civil lawsuits against anyone who “knowingly engages in conduct that aids or abets the performance or inducement of an abortion,” including paying for an abortion even through the use of insurance, according to the language of the bill. State Rep. Thomas Hall, R-Madison Twp., is also a sponsor.

The bill allows a defense against civil action for abortions “designed or intended to prevent the death of a pregnant mother and the physician made reasonable medical efforts under the circumstances to preserve both the life of the mother and the life of her unborn child in a manner consistent with conventional medical practice.”

While the Texas case revolves around the detection of a noise during ultrasounds early in pregnancy that doctors describe as electric activity and anti-abortion advocates call a heartbeat — a characterization physicians say is inaccurate — Powell’s proposed legislation has no such standard and would constitute a near total abortion ban. With 33 Republican cosponsors alongside the two sponsors, support for the bill represents more than half the GOP caucus.

The bill comes after Powell spoke at a Los Angeles event for the Arlington, Virginia-based anti-abortion non-profit LiveAction, which said they are partnering with “leaders across the nation starting with Representative Powell” in conjunction with the launch of their campaign.

“The campaign, which kicked off in front of thousands at the Santa Monica Pier, aims to ensure every American knows that abortion is the leading cause of death for children, and to ultimately save every child,” LiveAction said in a press release about the bill.

Ohio’s 2020 abortion report from the Ohio Department of Health showed 20,605 abortions in 2020, more than half of which were induced at less than nine weeks gestation. Of the 441 abortions induced in 19 or more weeks gestation, none were considered viable in medical testing, including ultrasounds.

Abortion is legal in Ohio up to 22 weeks gestation.

Planned Parenthood Advocates of Ohio say banning abortion would be catastrophic to communities across Ohio.

Advocacy group NARAL Pro-Choice Ohio said the bill would have “dangerous” impacts on already marginalized communities in the state, and continue a targeted trend for elected officials in the state.

“If all dominos fall in the wrong direction, abortion could be illegal in Ohio by July,” said NARAL executive director Kellie Copeland in a statement. “Every pro-choice Ohioans must register and vote.”

The bill has all-Republican support, which gives it better odds of passage with the legislature’s Republican supermajority.

The abortion ban is one of several pieces of abortion legislation making their way through Ohio’s General Assembly. A “trigger” bill that would ban abortion if Roe v. Wade is overturned is currently in Senate committee, and a bill targeting what sponsors called “failed” abortions, a statistically rare occurrence in Ohio, passed through the state Senate, and is headed for House consideration.