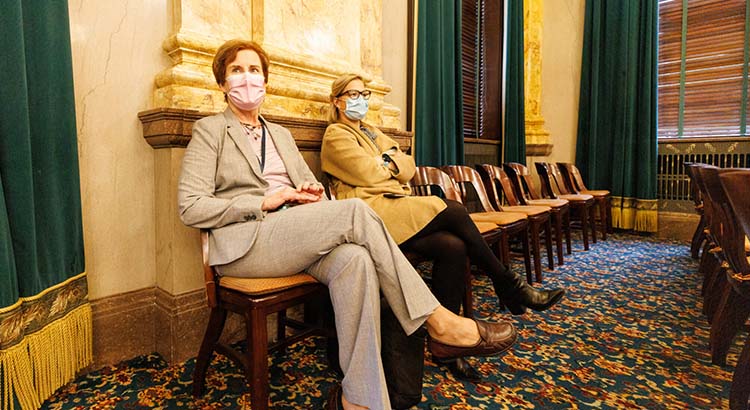 Did Ohio Medicaid Director Maureen Corcoran know earlier this year that she owned stock in health giants CVS and UnitedHealth as she awarded enormous contracts to subsidiaries of both? In separate sworn statements, she seems to be saying no and yes.

After a month of questions, Corcoran still hasn’t disclosed just how much stock she owned in the companies as she gave each a share of more than $22 billion worth of taxpayer business as her department tries to restructure the way it does business. But she has declared that she never thought she had a conflict.

Corcoran filed the affidavit as part of a lawsuit filed by a disappointed bidder seeking to overturn the procurement.

Toledo-based Paramount Advantage claimed that the process was biased against it. It put on evidence showing that evaluators regarded it as a weakness that the company was relatively small and hadn’t worked out of state. At the same time, evaluators didn’t consider it a weakness that giants like UnitedHealth and Centene have been the objects of state-filed fraud suits as recently as this year — or that the conduct in the Medicaid program of CVS’s drug middleman helped spur reforms that led to this year’s procurement.

Also as part of its suit, Paramount focused on potential conflicts of interest. It pointed to Corcoran’s ownership of stock in companies whose subsidiaries received billion-dollar contracts and to the fact that Medicaid wouldn’t say whether Mercer — the consultant that facilitated the procurement — counted any of the companies bidding on the business as its clients.

In court filings, Medicaid lawyers claimed it was unfair to question whether the Medicaid director had a conflict when she signed contracts that were part of the biggest public procurement in Ohio history.

“The entire topic is a smear campaign intended to harass and embarrass Director Corcoran,” one filing said.

The same document claimed that several news stories on the topic were inaccurate, but didn’t point to any specific errors. And it said the possibility of Corcoran owning stock in interested companies “had not occurred to her.”

In an affidavit of her own last week, Corcoran seemed to claim she wasn’t aware that she owned CVS and UnitedHealth stocks at the time she awarded their Ohio subsidiaries contracts. She explained that her investment advisor handles day-to-day management of her portfolio, which includes scores of stocks.

“I am not aware of the holdings in my or my husband’s accounts, including but not limited to stocks, bonds, mutual funds, on any particular day or during any particular month,” Corcoran swore in her affidavit.

But that seems hard to square with statements she has made to the Ohio Ethics Commission. They say she knew she held stock in CVS and UnitedHealth for 24 straight months — and that she knew she held the stocks after the procurement process had started.

As with other high government officials, Corcoran each year has to declare stocks and mutual funds of which she owned at least $1,000 worth during any part of the previous year. Corcoran’s show that she owned CVS and UnitedHealth stock every month from when she took office at the beginning of 2019 through the end of 2020 — more than a month after Nov. 20, 2020 deadline to submit applications for the managed-care business.

On April 1, the Medicaid department announced that it had selected CVS subsidiary Aetna Better Health of Ohio for a $1 billion contract to manage services for children with complex behavioral needs. That program, OhioRISE, will operate in coordination with the state’s Medicaid managed-care contractors.

Then on April 9, the Medicaid department announced that it had selected UnitedHealth Group subsidiary UnitedHealthcare of Ohio Community Plan as one of six companies to share part of the state’s managed care business, worth $22 billion over five years.

Thirty seven days later, on May 15, Corcoran filed an ethics disclosure that seems at odds with her affidavit saying she’s unaware of her stock holdings in any particular month or that she might have a conflict. It said that she owned CVS and UnitedHealth stock in each of the 12 months of 2020.

Corcoran swore she knew what her holdings were during each of those months.

“I swear or affirm that this statement and any additional attachments have been prepared or carefully reviewed by me and constitute my complete, truthful, and correct disclosure of all required information, and that the address listed on page 1 is a correct mailing address,” the form says over her signature.

It adds, “I acknowledge and understand that, among other potential violations and penalties, knowingly filing a false statement is a criminal misdemeanor of the first degree… punishable by a fine of not more than $1,000, imprisonment of not more than six months, or both.”

The Medicaid Department didn’t respond to questions for this story.